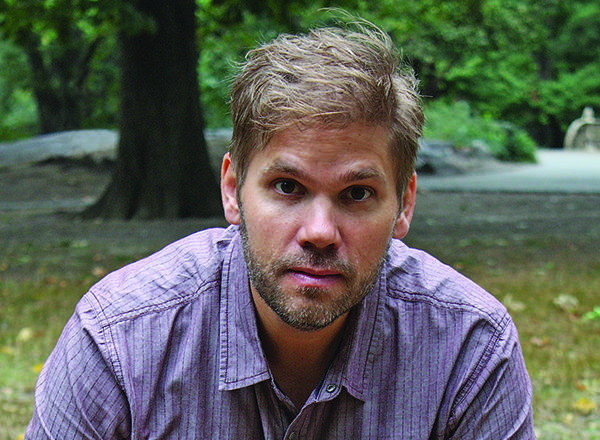 The Peninsula Pulse’s annual contest, the Hal Prize, is now accepting submissions of prose, poetry and photography from writers and artists of all ages and skill levels. Those eager to share their fiction works with Pulse readers in this annual issue will also enjoy the chance to be read by Minnesota author Peter Geye, this year’s fiction judge.

Geye is the author of the novels Safe from the Sea, The Lighthouse Road, and Wintering, all set in the northern Minnesota wilderness. Reviewers have likened him to Jack London and Jon Krakauer, and his most recent novel has earned praise from Pulitzer Prize-winning author Richard Russo.

I recently talked with Geye about his three decades as a writer, the value of reading for writers, and how the literary landscape has changed. For more on Geye, visit petergeye.com. For more on The Hal Prize, visit thehalprize.com.

Alyssa Skiba (AS):  I understand Ernest Hemingway and a high school English class played significant roles in your decision to become a writer. Take us back to that moment.

Peter Geye (PG):  When I was in high school I was not the world’s greatest student; I wasn’t flunking out or anything but I didn’t have a particular drive or motivation to excel. I had a fantastic teacher, his name was David Beenken, and there was a day in class when I was goofing off and he called on me and I answered in some smart alecky way and he just told me that it was easier to be a smartass if you read the book. So I took that as a challenge and went home and started reading the book, A Farewell to Arms, and it was really a significant moment. It changed not only my course of academics, where after I became serious and engaged, but it also really made me want to be a writer.

AS:  What important lessons did you take away from Hemingway’s approach to writing?

PG:  I remember reading somewhere that his habit was to wake early in the morning and write…to be diligent and to be committed to the work. It’s the first thing I tell my writing students all the time:  you have to have your butt in the chair and be working or the work is not going to get done.

AS:  You are this year’s Hal Prize fiction judge. In your view, what makes a good fiction story?

PG:  Whatever is ordinary about the story [the author] is telling, there has to be some evidence that she sees beyond what is ordinary and some demonstration of that in the work. I think that the writer has to have a distinctive style and a distinctive voice…there has to be an elegance of language. For me and this is perhaps not true of others, I want a story that is character driven, where things happen to people and that I not only understand what has happened to them but that I empathize in some way that is meaningful.

AS: What advice would you give to a budding writer?

PG:  Read widely and read curiously, and take an interest in lives and in places and in cultures that aren’t necessarily your own – even if you’re not going to write about them necessarily – to understand the full spectrum of human experience, which is of course impossible, but to understand as much of that as is possible.

AS:  Any advice for those aspiring to be published?

PG:  There is a lot of practice that goes into this and there’s going to be a lot of failure along the way. You have to recognize the failure and be able to deal with the failure and just as importantly, you have to be patient enough to know that your work, when it’s not ready, it’s not ready for the world to see yet and sometimes that requires putting a story or a novel in a drawer for a year or for the rest of your life and moving onto something else in the interest of doing better work.

AS:  How have you seen the literary world change during the past 30 years?

PG:  With the advent of Amazon and with the advent of electronic books, all of those devices have changed the landscape in some ways. As much as anything, they’ve changed the economics of it but they have also changed the way that we browse for our books and make the discoveries. I’m sort of adamant about making those discoveries still so anytime I’m in a town at all, I look for the bookstore and I walk around the bookstore and I look for things I don’t know, but it’s harder.

AS:  What are you currently reading?

PG:  I’m currently reading 24 novels by 24 students in The Loft program that just wrapped up so I’m reading about three or four novels a week right now. It’s terrific, it’s wonderful to see all the work that I’ve helped coach a little bit and have had the pleasure of watching come to life. Other books, though, the last couple of books I read before I hunkered down for this reading jam was Jesmyn Ward’s new book, Sing, Unburied, Sing, which is a magnificent story and people who haven’t read Jesmyn Ward absolutely should, and then I read a strange book called Sisters by Lily Tuck, which is almost impossible to describe. It’s experimental and very voice driven but a terrific story about a marriage coming apart and the role of a sister in the dissolution of that marriage.

AS:  What are you currently writing?

PG:  A book that is sort of a culmination of the trilogy which Wintering, my last book, was the second book and The Lighthouse Road was the first, and it’s just a continuation of this family’s life up in northern Minnesota. This book also goes back to Norway for some of it where the original character in the trilogy came from and talks about her parents’ life there as well as a contemporary story that’s partly set in Norway. I love it. I’ve not had so much fun writing a book even though I’ve been much busier in my life…I hope to finish it this year and hopefully get it out there the year after that.