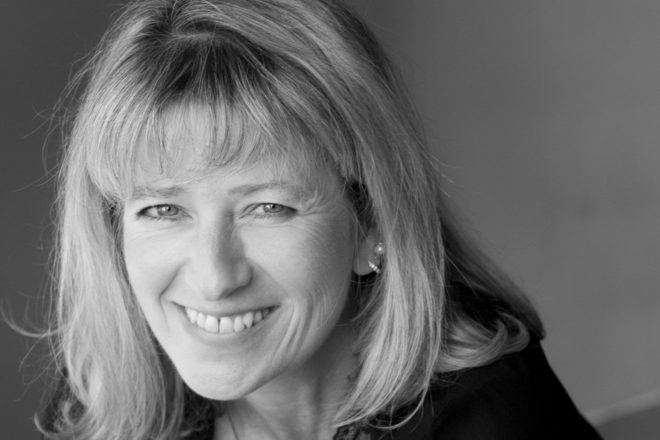 When Leslie Adrienne Miller was an undergraduate at Missouri’s Stephens College in the ‘70s, she met various poets and writers who visited the women’s-only college for readings and residencies. Among them were Margaret Atwood and Adrienne Rich.

It was a special time in Miller’s life. A budding poet, hearing those women share relatable poems and stories helped Miller see the potential to craft her own literary career. That’s exactly what happened.

Four decades later, Miller is the author of six collections of poetry, and an English professor at University of St. Thomas in Saint Paul, Minnesota. She is also the poetry judge for this year’s Hal Prize poetry, prose and photography contest.

With the contest’s May 1 deadline nearing, I spoke with Miller about her journey with poetry, celebrating National Poetry Month, and what makes a good poem. Learn more about her at lesliemillerpoet.com. Enter the Hal Prize at thehalprize.com.

Alyssa Skiba (AS):  When did you know you wanted to be a poet?

Leslie Adrienne Miller (LM):  I did it in high school and junior high and I wasn’t at all sure at that point that anybody could really do it for a life choice. I just did it and I think it was really in college that I met a lot of writers. I went to a pretty special college. It was called Stephens College in Columbia, Missouri and it was a women’s college and at the time I was there in the early ‘70s, they had a lot of writers in residence and they had a large grant to bring in visiting writers so I met a lot of writers. Adrienne Rich, for example, Tess Gallagher. They brought in a lot of women, Margaret Atwood, all when they were pretty young and I had no idea that other people weren’t getting that kind of exposure until I went to graduate school. Then I realized how special the place I had been was because other people just didn’t have that exposure to a lot of writers so it was just this weird stroke of luck that I was at the right place at the right time. Of course, that led me to understand that, yes, you could do this.

AS:  In those early days, how did you use poetry?

LM:  At that time, I’m not sure I knew. It was just something that I needed to do. I saw it maybe as a way to bring together various things I was already interested in. Reading, of course, literature in general and I was also very attracted to philosophy and thought seriously about being a philosophy major. Poetry is a really great place to bring other disciplines into the same arena.

AS:  What themes do you explore in your work?

LM:  Continuing from the previous comment, one of the things in more recent years that has become really interesting to me is explaining our relationships to science through poetry. Certainly my last two books did a lot of that.

AS: You will be judging the poetry contest for the Hal Prize. In your view, what makes a good poem?

LM:  You’re looking for skill. That’s the easiest thing to locate, how people are handling lines, sentences, stanzas, language, metaphors – all of the various craft aspects of the poem. When all of that’s in place, the thing that distinguishes people is voice. You hear a person speaking and that comes through pretty strongly because a lot of people write poems but they just haven’t done it enough to get to that point where they have established really a voice.

AS: What advice would you give a budding poet?

LM:  Read. Read widely. I think people don’t often read widely enough. My students, anyway, they tend to stay in their comfort zone of poets who write the way they do and I think it’s very important to read poets who don’t write the way you do. Even to read poets that you don’t think you like because somebody likes them and somebody published them, somebody believed in them and reading them helps you discover what it is that they’re doing that’s valuable.

AS: What place do you think poetry has in the world?

LM:  Many places, I think. I’ve always suspected that most people who read regularly write poetry, whether that’s secretly or for an audience. I think it allows you to slow down and consider things in a way that you can’t do with thought alone.

AS: How are you celebrating National Poetry Month?

LM:  I’m in the Twin Cities so National Poetry Month is pretty big here. There are just great readings going on all over town and I definitely usually celebrate by going to some of those.

There is no other way to thrall.

Your eye must blue a script

just under the ridge, lower itself

exactly where the shadows lie

longest in sedge, and pull till ruffle

is a code that vanishes as you read it,

but these velvet shelves of tulle

open beneath its skirts. Wells of melt

circle tussocks of scrub and take all

in. When dawn crawls into cottony pinks

but the ways of creatures and vehicles

through which hunters climb stands

on the rim, and deer tug green fizz

along the east wall of a fallen oak

where sun has already run its tongue.