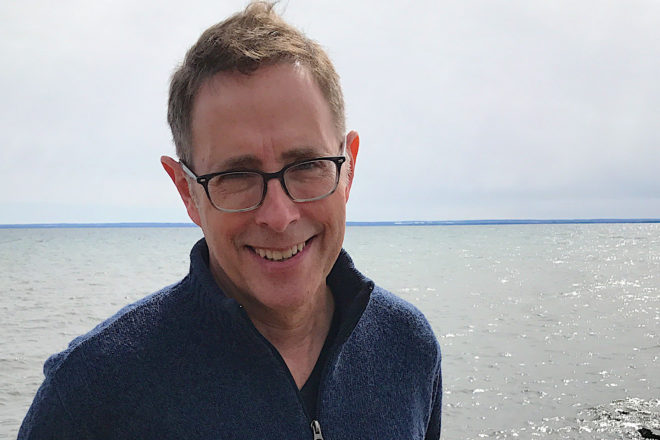 The goal of Door County Reads is to broaden our understanding of our world, our communities and ourselves through reading and sharing ideas about the same book.

This year’s selection is Virgil Wander by Leif Enger. The novel follows the inhabitants of a small Midwestern town in their quest to revive its flagging heart. There are quirky characters, from the local baseball hero to an unusual kite creator, and nostalgic themes such as the old bootlegged movies stashed away and the giant sturgeon that has yet to be caught. In the middle of it all is protagonist Virgil and his lyrical narration of small-town life.

On Jan. 25, Enger will be in the county to kick off the weeks-long community event. In advance of his visit, here’s an interview with Enger in which he shares some thoughts about his latest novel and writing in general.

What do you hope readers take away from reading Virgil Wander?

My favorite books leave me with something close to real memories, so it feels like time actually spent with Ishmael, or Binx Bolling, or Mattie Ross, or Brown Dog. Fictional people bring me so much laughter and reflection, [so] my best hope is that Virgil, Nadine and the others might stick with a few readers in that affectionate way – as people you like, in a place you enjoy.

It’s a good question. I’m not sure it qualifies for that designation, though certainly it has elements – the man on the water, the cleansing or baptismal effects of kite-flying, certain fantastical transformations. But I think of magic realism as storytelling in which characters respond to the magical as though it were normal. That’s not really the case here. Also, the fact of his head injury makes Virgil something of an unreliable witness. So in the question of whether his perceptions are accurate or whether he’s deluded – well, I know what I think, but a reader is free to go either way.

Do you consider Virgil Wander’s brain injury – and his subsequent ability to see his life and home in a new light – as a curse or a gift?

Ultimately it’s a gift. What was so enjoyable as this story developed was how that early, almost-tragic moment – when Virgil suffered his injury and woke up in confusion – gradually transformed into the thing many of us want above all else: a fresh start, a chance to escape creaky thought habits, to rebuild our lexicon, change the wallpaper, throw off fear and live with something like clarity.

Is there a character in Virgil Wander who was especially difficult for you to figure out and write?

Most of the time, writing a character is just a matter of letting them walk around on the page and talk a little – they let you know who they are pretty quickly.

But Adam Leer required intentional effort. He’s unlike most people I’ve known, who might have foibles or flaws but are essentially whole. I wanted Adam, on the other hand, to be missing some pieces – empathy, a conscience, the components that make us human – and for him to be the logical result of what he lacks.

Jack London wrote a great novel called The Sea Wolf in which the deeply compelling villain is the ruthless king of his small world – an aggressor and belligerent, though not without his charms. Do you want to build a monster? Leave out compassion. The rest will follow directly.

How did you begin writing novels?

Gave it a shot in my early twenties, had no idea how to proceed and surrendered after 120 bewildered pages. Then my brother Lin, at the Iowa Writers Workshop, suggested we collaborate on a crime novel – he had the idea, the character, the setting. We mailed chapters back and forth through the U.S. Postal Service and wound up publishing five paperback mysteries with Pocket Books. It was a crash course in writing readable fiction.

Mornings, I revise the previous day’s pages before moving ahead. Then plow forward until the steam starts to evaporate, and finish by making notes in a separate file – generally ideas that have surfaced during the day about unwritten stuff still to come. Past, present, future: that is a good day.

What books have changed your life?

The Narnia stories irreversibly enlarged the universe when I was 11 or 12.

Charles Portis’ novel True Grit (it’s better than either film adaptation, and they’re both very good) is the best reminder I’ve found that we are all vain, hilarious, fearsome and wonderful. For hours after reading it, I feel kindly toward everyone on the planet. I don’t understand that, but it happens every time.

And there’s a beautiful, stark concept in Walker Percy’s 1962 novel The Moviegoer where Binx remembers it’s his duty and pleasure to search for meaning, even if he never finds it.

Who’s helped you the most in your career as a writer?

Robin [Enger’s wife] reads patiently through ugly first drafts. Lin, my brother and early collaborator, writes his own beautiful novels that keep me motivated. Elisabeth Schmitz, my editor at Grove Atlantic, sees to the nub of whatever I send her; and my literary agent, Molly Friedrich, pokes me sometimes to make sure I’m still breathing.

After a book is “finished,” do you stop thinking about it, or does it stay with you?

It takes some time for characters who’ve lived [for] years in your imagination to loosen their grip – you just get fond of them; you want them to stay. But publication is a slow process. From final edits to binding and shipping requires a year or more.

By that time, a new cast of characters is starting to form. You’re wondering what they love, what they fear. What do they see from the kitchen window? What’s the difference between what they expected of life and what they’ve received? And then, if you’re lucky, and you put in the work, you get swept up.

Are you currently working on any other projects?

The next book is also a Lake Superior story, this one set in the near future. Though it’s not a sequel to Virgil, it takes place in the same geography, so I’m enjoying a sense of familiarity and overlap. Stories emerge from place, and in this place, the currents are strong.

You’ve been to Door County before. What was your first impression?

It was late June 2006, sunny and cool. Robin and I drove over to look at sailboats. What we didn’t expect was the pull of Door County itself – remote, lush, informal. The beauty is only part of it. I remember the sensation, stepping out of the car, of pressure sliding away.