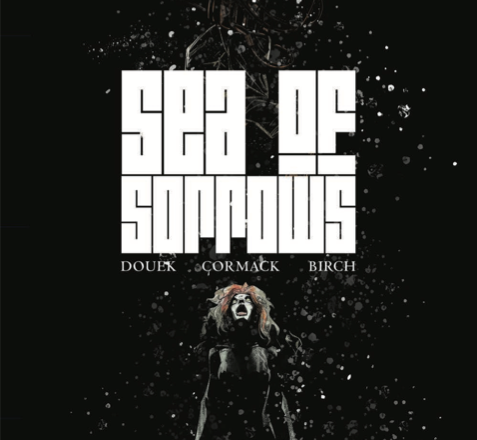 Despite growing up on a peninsula, surrounded by water, there is still something unsettling about open water. Maybe it’s not being able to see below the surface, or maybe it’s knowing that only 5% of the Earth’s oceans have been explored and charted. Either way, all I know is that I get nervous about what hides below the surface.

So when IDW Publishing – an American publisher of comic books, graphic novels and more – sent word about some new horror comics it’s releasing, I jumped on the opportunity to check one out for the spooky season. And one on the list seemed tailored to my own fears: Sea of Sorrows.

The story takes place in the aftermath of The Great War, when the North Atlantic was ripe for plundering by independent salvage crews. When a former naval officer hires the S.S. Vagabond, he leads the ship to a sunken U-boat and a fortune in gold. Tensions mount as crew members prepare to double-cross each other, but the darkness of the ocean floor holds deeper terrors than anyone has bargained for.

Both the content and visuals of this comic are dark, so this is not for young readers or those who are uncomfortable with violence and gore. But beyond the surface, Sea of Sorrows is also an exploration of greed and the darker side of humanity.

Written by Rich Douek and illustrated by Alex Cormack, Sea of Sorrows is an excellent addition to your spooky-season reading list. I sent the author and illustrator questions about creating comics, working as a team, increasing my insight into this bone-chilling story and more.

Grace Johnson (GJ): What got you interested in comics?

Rich Douek (RD): I’ve been a fan of comics ever since I was a kid – I’d hit up my local newsstand every weekend and buy whatever looked cool. Over time, I got more and more into the story lines and characters, and started to imagine what it would be like to make my own.

Alex Cormack (AC): My older brother. He collected them in the late ’80s and early ’90s and would pass them down to me. Since then I have always loved them.

GJ: Is it difficult to create one cohesive work with two people? Was the story created together with a singular vision in mind, or did one of you have the story and approach the other with the idea?

RD: In general, I’ve found it’s difficult only when you don’t trust and value the people you are creating with. So long as everyone is open to discussing decisions and works to help everyone else on the team shine, it’s not a problem.

Alex and I have known each other for years and had worked together before on Road of Bones, so that trust and mutual respect were there before we even put the first page down on paper.

Sea of Sorrows came together mutually, with us bouncing ideas off of each other and building on what we came up with. Alex had the idea to do a deep-sea story, which prompted me to come up with the scenario and an idea for a monster, which he then designed and built on, and so on, back and forth until we got to a place where we both loved it.

AC: Nope. The story is Rich. I told him that I wanted to draw something on the ocean, and we kicked around some ideas, but the credit has to go to Rich.

GJ: What do you think is the hardest part of creating a comic?

RD: I’d say it’s not one specific thing, but more the fact that a lot of different things need to line up in order to produce a comic. There’s scheduling, creative visions and lots of other things that need to be in sync. It can be challenging sometimes to make everything work, but when it does, it’s very much worth it when you see the results.

AC: For me, it’s all equal. The storytelling, the acting, is the wardrobe accurate, how can I make this character stand out, the lighting, where the panels are, does that thumb look right. But that being said, it’s also a lot of fun.

GJ: In Sea of Sorrows, we sort of get to see two different timelines: the present story and then flashbacks. Can you talk a little bit about the two settings and why you decided to set the story in a postwar time?

RD: Early in the process, Alex showed me a sketch of his with an old-time diving suit, and I fell in love with it. So I knew we wanted to set it in an era where suits like that were in use. World War I seemed like a great choice, it being the conflict where technology really brought the horrors of war to an unprecedented level of brutality and horror.

We looked at it as an event so traumatic, it scarred the collective consciousness of the world. We felt that both the war itself, and the aftermath, were the perfect subjects for our themes to coalesce around.

AC: The settings for me, we really had three: WWI, on deck and below the water. [In WWI scenes], I wanted to show how horrible and grimy and violent it would have been; on deck I wanted the sun out, but with some noir lighting to help show that tensions were high; and then under the water, I wanted to give a very dangerous feeling that you’re in the dark in this alien world, and you can’t see two feet in front of you.

GJ: Without spoiling it, who came up with the mermaid design, and why did you go in that direction? It was very atypical, to say the least!

RD: I think I came up with the idea of the mermaid being more than what’s initially apparent when you first see her, but the actual design and how it worked was 100% Alex!

AC: Thanks, that was me. I wanted to surprise the audience with this thing and had – well, what she does – on my mind for a while. It was one of the earliest things put together for Sea of Sorrows, and I was so excited to see people’s reactions to her.

GJ: Sea of Sorrows is your second horror comic, with Road of Bones preceding this one. You mention in your afterword that you don’t see yourselves pursuing sequels for these two. Are you working on anything new?

RD: For horror, both Alex and I agree that sequels often run the risk of watering down the initial material, so we decided to approach our titles more like separate stories that are still related by mood and theme. So you can enjoy Sea of Sorrows without ever having read Road of Bones, but reading both might give you a greater appreciation of both works.

It’s a little too early to give concrete details of what we have planned, but we do have a new book in the works that we hope will continue that trend.

GJ: What is a piece of advice you have for aspiring comic writers and illustrators?

RD: My biggest piece of advice is, don’t wait for permission from anyone to get started – not a publisher, not anyone. There are more ways to make comics and get your work out there than ever, so don’t [let] the feeling that you need to be a paid professional right out of the box stop you from making the comics you want to make.
The first comic I wrote was five pages long, had no publisher, made zero money for me and was honestly not all that great. But I made it, and that gave me the confidence to make more, and eventually I got to a place where I was able to pursue writing professionally. So, my advice is to start as small as you need to and build from there.

AC: Study animation. When you can take a character and know how they will move and look from multiple viewpoints, it helps to tell your story.

GJ: What are you currently reading, and what is one comic book or graphic novel you would recommend?

RD: I’ve been reading a lot of comics lately. Some current favorites are Moon Knight, Nocterra and Beyond the Breach. One book I can heartily recommend is Karmen by Guillem March. It’s a surprising, deep and beautiful meditation on life and death, and one of my favorite recent discoveries.

AC: Right now [I’m] not really reading anything, but looking at a lot of new art books. But Christophe Chabouté’s take on Moby Dick was constantly open while creating Sea of Sorrows.

Sea of Sorrows was originally released in five individual issues, which are available for purchase. The entire series bind-up is set for release Nov. 16, 2021. Visit idwpublishing.com to find out more.