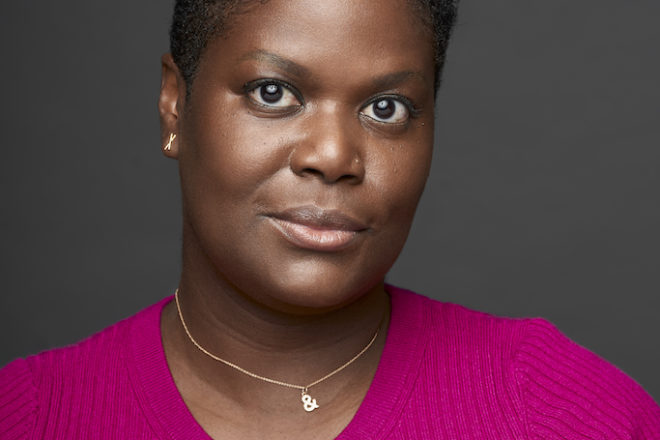 The festival will begin with a free community creative lab Sept. 15; author workshops will take place Sept. 16; and author talks and signings will close the festivities Sept. 17. Visit writeondoorcounty.org to get more details and register.

I talked with Wolfe about her debut novel, Last Summer on State Street. The story follows 12-year-old Felicia “Fe Fe” Stevens and her group of friends – Stacia, Tonya and Precious – during the summer of 1999, when they’re living in the Robert Taylor Homes, a public-housing project on the south side of Chicago. Although the book is a work of fiction, Wolfe tapped into her and her family’s experiences of living in the Robert Taylor Homes to aid her in writing it.

The following is an excerpt from a Door County Pulse podcast that has been condensed and edited for clarity. You can listen to the full interview below.

Grace Johnson (GJ): This is a fictional work, but you did grow up – live – in the Robert Taylor Homes?

Toya Wolfe (TW): Yes, I lived there until I was 18 and went off to college, and then even a few years after, I was away at school, and my mother and sister still lived in the buildings. So I would come home on holidays from college and go right back into the projects.

When the relocations started, I was sort of privy to all of the terminology and the process of everything because my family was still going through it. I was actually working at a community center with young people at the time, and that is sort of what sparked the idea for the book – that these kids, their whole lives are about to be disrupted.

GJ: I was thinking about this the other day: coming-of-age stories. Those stories, typically, follow young boys, and we don’t see a lot of coming-of-age stories for girls in that age range. Was that a conscious decision to try to tackle that, or did it just also happen to be that?

TW: I’m aware of the problem, too. I grew up watching a lot of TV shows and channels that even when you do get a child’s perspective, it’s often white and often boys. I think later I started to realize that this is something that we haven’t seen so often, and I felt proud about it.

GJ: Were you always a writer, or did it come to you later?

TW: I have been writing since I was 10 years old. I entered an essay competition in elementary school, and the prompt was, “the person you admire the most.” I wrote about my mom. And it won – it won the whole competition.

I had to read the essay in front of the whole school. I’m 10 years old, reading from this little essay, and no one is talking. You could hear a pin drop. Even as a 10-year-old, I understood that people could check out; they could be making fun of me. But it was such a captive audience. I think it did something to me: that something I wrote, people were interested in listening to.

GJ: How do you see your book fitting into the festival theme of “Crossroads”?

TW: When I think of the word “crossroads,” it reminds me of intersections or people coming back together. One of the most important parts of this book is that these characters do find each other again.

There is this point in their lives when they are young, and all these things happen, and they go off on their own, maybe forget each other, but they will be reconnected. There is a theme of revisiting your past and reconciling with people – going back to moments and tension and deciding if you are going to forgive people.

GJ: Is there anything else you really want people to know about your book?

TW: I’d love for people to read this book and have conversations with people in their inner circles about what they experienced, what new questions they have drawn since they have been exposed to this story or this community of people they probably have never interacted with personally.

I hope this becomes a conversation piece for people to talk, to have intimate conversations with those they know and love. I hope it’ll spark some dialogue and eventually spark some changes in areas where people are moved to make the world better.

GJ: I wanted to, again, just push the Washington Island Lit Fest. It will be the weekend of Sept. 15-17 on the island, and it will feature author talks and signings, and workshops as well.

TW: The workshop that I am teaching is for all levels of writers. If you have an idea, you can still come to this workshop because we are going to write in the workshop. We are gonna be starting from scratch. And if you have something already, then you can start generating pages toward chapters. We are gonna have a good time, and you are gonna leave feeling pretty accomplished.