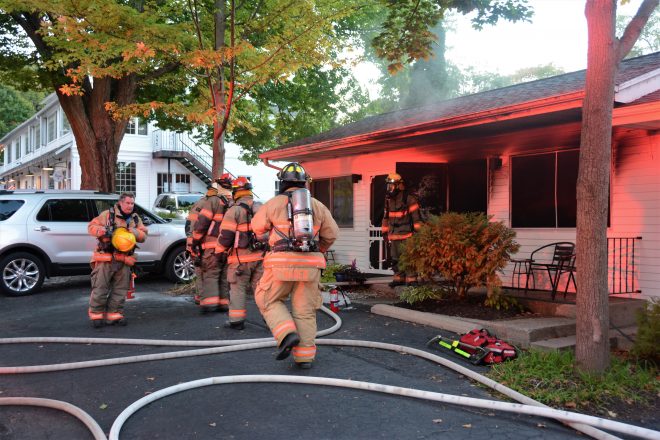 Gibraltar firefighters needed fewer than 10 gallons of water to finish dousing flames last week at Cedar Court Inn in Fish Creek after the quick action of an employee contained the flames with a fire extinguisher. Photo by Tad Dukehart.

Fish Creek – Two fires in Fish Creek during the past month were doused by people making split-second decisions with fire extinguishers.

On Sept. 10 around midnight, a passerby noticed flames coming from a Main Street space that serves as a small laundry. A dryer there had caught fire. The passerby ran into the laundry, grabbed a fire extinguisher off the wall and blasted the flames. When firefighters arrived, they tore the dryer out and used only a water can to finish the job.

On Sept. 21 around 6 pm, an employee at the Cedar Court Inn used an extinguisher to battle flames in a single, unoccupied room. Firefighters used fewer than 10 gallons of water to finish dousing the flames.

“The impact of those extinguishers was significant,” said Gibraltar Fire Department Chief Andy Bertges. “I don’t think a lot of people realize what was prevented and saved. It’s hundreds of thousands of dollars’ difference and peoples’ livelihoods that were protected. I think it’s just amazing.”

The cause of the first fire was an article that combusted inside the dryer. The second fire was electrical in nature.

“We’re pretty sure it was an appliance, but we can’t tell which one because fire burned up the evidence,” Bertges said.

His department conducts fire inspections twice a year on most year-round businesses and once a year for those open seasonally. Some of the more common infractions are appliances that are permanently connected to extension cords. The crew also checks fire extinguishers.

“So far this year, I found three fire extinguishers that would not have worked if someone pulled it off the wall,” Bertges said.

Both of the recent fires provide an opportunity to stress the importance of fire extinguishers.

“Check your fire extinguishers,” Bertges said. “Know where they’re at, and be sure no one has moved it.”