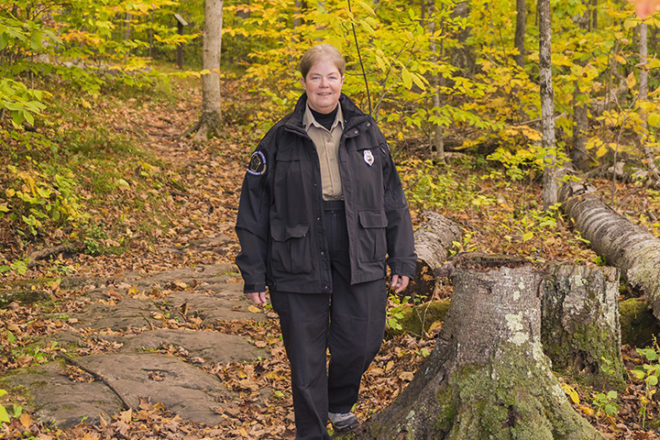 If a career in natural resources didn’t work out, Michelle Hefty had her viola to fall back on. While everyone thought she would go on to a career in music, “I had this little love in the back of my mind.” After 28 years as superintendent of Newport State Park, few people have asked about her career in music.

The human resource is as dangerous to a park like Newport as it is important. While most other state parks in Wisconsin’s system try to attract as many visitors through their gates as they can, Newport sits quietly on the northern tip of the peninsula, trying not to be loved too much.

“That was a really big concern back then was, how was I going to manage the human resource to not really overly love the park?” Hefty said. “What we noticed, when the lake levels started going down and the beaches weren’t these big, wide-open beaches, people use the trails now.”

The change in the beaches impacted the number of visitors that Newport saw, but Hefty said that wasn’t a bad thing.

“You could see the resource wasn’t taking the hit that it was, the use was getting spread out throughout the whole park,” Hefty said. “The whole use really shifted I say in a good way.”

Even the state knows Newport is fragile.

Newport State Park is the only formally designated wilderness park in Wisconsin, meaning the park doesn’t manipulate the land to attract tourists or make things easier on campers. The attraction lies in its wilderness.

“We very nearly meet the federal term of a ‘wilderness area,’” Hefty said of the designation. Due to being less than 3,000 acres, its permanently paved road and a building on the property, Newport is not a true wilderness. But it is still managed like one.

“This is Mother Nature, this is the way she is,” Hefty said. “We’re not manipulating it in any way.”

It becomes an important point when visitors ask why they don’t mow the grass on the beach or develop a more accessible trail system. It’s the hands-off, low-impact approach, Hefty explained.

The locals living around the park during its inception in 1964 were also important in making sure Newport remained a place for the quiet naturalist.

“The park, when it first was formed, there was supposed to be a 100-unit campground, heavy day use and the locals and the people fought it,” Hefty said. “It had been identified way back in the ’30s and ’40s by the federal government as a unique area that should be preserved.”

Residents didn’t want another park like Peninsula State Park in Fish Creek. In a rare display of local power over state plans, the Department of Natural Resources (DNR) conceded and scrapped the big campground and development. The state gave up more campsite fees, day use passes and other revenue sources to keep the area wild.

“We’re like polar opposites from Peninsula and not in a bad way, but in a way that this park is very unique with a lot of endangered, threatened resources,” Hefty said.

Newport has remained a forest since the first settlers arrived on the peninsula. The untouched nature of the area has left it with some species that cannot be found anywhere else in the state.

Hefty is familiar with the rest of the parks throughout the state. If she didn’t work at each one, she likely visited with her family while growing up in Mount Horeb, just west of Madison.

“We lived real close to Blue Mound State Park but we probably spent more time at Devil’s Lake,” Hefty said. “I started with the DNR back in 1988. I did an internship in my junior and senior year with Dane County Parks.”

Hefty graduated into the middle of a three-year hiring freeze at the Wisconsin DNR. A battle between increased spending and cutbacks in staffing at the DNR under the watch of Governor and former DNR Secretary Anthony Earl led to the freeze while spending in other DNR programs went up. Hefty, a new graduate, began looking elsewhere in the Midwest to use her degree, but she never figured out how to leave Wisconsin.

“I knew my best chance was in Wisconsin, Michigan or Minnesota so I kind of focused on that area,” Hefty said. But unable to find anything in the parks, she found herself as a waitress and bartender in Madison.

In 1986, amid struggling DNR funding and programming, the Natural Resources Foundation of Wisconsin was formed and Hefty found a job leading teams of young workers through conservation projects.

“It patterned after the old Civilian Conservation Corps camps,” Hefty said. “It was a crew of 18- to 21-year-olds and they paid them a minimum wage but they gave them a job for a year and it was doing resource projects around a certain area, so they lived and worked in that area.”

Hefty spent the year in Ellsworth, finding work at a local landscape company when her time with the corps was over. She finally found herself with a limited time position at Kinnickinnic State Park, but the clock was still running out on her need to find a true career.

At Kinnickinnic, Hefty got her first taste of managing a state park. She kept track of the moorings and campers on the St. Croix River and she pumped the toilets, a job she still can’t escape.

“That was my first place pumping pit toilets and I have pretty much done that to this day,” she said, laughing. “Cleaning toilets is always part of the job.”

When she began interviewing for another position within the DNR, Newport was one of the parks in need of a manager.

“I was hoping for this one and I got this one,” Hefty said. “They’ve been stuck with me ever since.”

Her first day at Newport was the opening day of deer season in 1989 and she has seen a few of those hunters every November for the last 28 years. She has watched children grow up and families get bigger while the park remains in its wild state. She knows the children and their families are the only way the park is going to survive.

“It takes those kids to learn about the resource and how to protect it,” Hefty said. “That’s where we’re seeing those younger kids. They’re grabbing onto a cause and they’re hanging onto it.”

“I think the growth has been, and we’re all struggling, it’s how to keep up with the millennials,” Hefty said. “I always feel like we’re kind of playing catch-up with that.”

The cheery Hefty embraces the challenge more than she shuns it. She looks forward to the day when technology can fulfill part of her role and give her the opportunity to engage with the visitors on the trails of Newport rather than the papers behind her desk.

“I initially came in and was going to move up in the world. The bigger the park, the higher up the ladder you go,” Hefty said. “I fell here and said this was it. What keeps me coming into the park day after day is the people that we’re encountering. It’s those conversations, those connections that you make, three generations. Especially when you stick around like I did.”