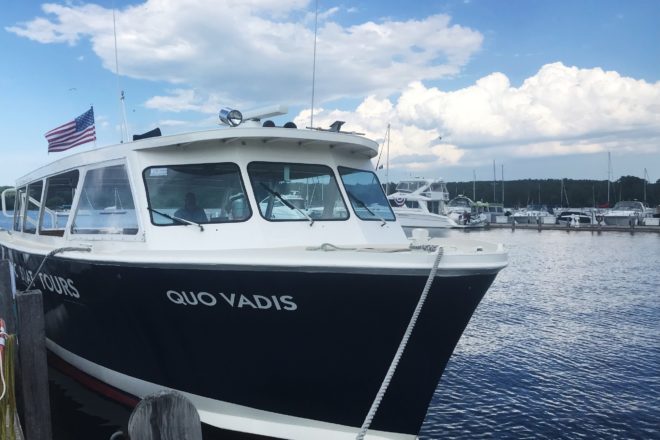 The Quo Vadis is docked in Fish Creek, with Captain Dave McNeil at the helm. Photo by Maddy Schierl.

The Latin phrase “Quo vadis” asks, “Where goest thou?” or, more informally, “Where are you going?” If you’re a passenger aboard Fish Creek Scenic Boat Tours’ Quo Vadis, you’d have no trouble answering this question. The Quo Vadis leaves Fish Creek for tours daily, weather permitting, to cruise past Millionaire’s Row and the west islands or past Peninsula Park and Ephraim north. There’s also a sunset tour with live music.

A more interesting question for a Quo Vadis passenger to ask is, “Where does this boat come from?” After all, isn’t it true that we truly know where we’re going only if we know where we’ve been?

The Quo Vadis is a boat with a long Door County history. Certified for 69 passengers, partially covered and equipped with rows of front-facing bench seats, it was built in 1962 by the Marinette Marine Company. For many years, the Quo Vadis ferried retreat goers from Fish Creek to the Catholic Holy Name Retreat House on Chambers Island and back. (It’s no coincidence that the Quo Vadis was once connected to the Catholic faith: in the Latin Vulgate, the question “Quo vadis” is stated at least seven times.)

When the Diocese of Green Bay ceased Holy Name Retreat House operations, Eric Lundquist took full ownership of the Quo Vadis. He had previously been leasing the vessel with the stipulation that he would also ferry retreat goers to and from Chambers Island.

Today the Quo Vadis is again under new ownership. Cody Bolton joined Lundquist at Fish Creek Scenic Boat Tours in 2013 as a part-time captain before transitioning into a full-time management role in spring 2017. As of July 1, Bolton is the Quo Vadis’ new owner.

Captain Cal Lundquist – Eric Lundquist’s father and a part-time captain of Sister Bay Scenic Boat Tours’ the Nörra Dörr – believes that a growing business in Florida has been keeping his son busy and contributed to the decision to sell the boat. Tom Blackwood, a part-time narrator on the Quo Vadis’ daily cruises and a former superintendent of Peninsula State Park, said of the sale and its potential effect on day-to-day operations, “I don’t think anything is going to be that different.”

Despite behind-the-scenes changes, Quo Vadis passengers will continue to experience the rich history of the Door County peninsula and enjoy spectacular views of its shoreline from the water. As Captain Cal put it, “There’s something spectacular about Door County. I can’t even describe it.” You’ll just have to hop aboard to experience it for yourself.