Choosing civility is putting the principle of respect for others into everyday practice. The core, or center, of civil behavior is respect. Behaviors move along a continuum from this center, the positive ones in one direction (paying attention, being inclusive, listening, the principles being addressed in this column), and the negative ones in the other direction (apathy, passive or active disregard for others, discounting the experience of others, exclusion, discrimination, outright hostility).

Understandably, much is made out of showing respect for others. We are told/taught to respect our parents and our teachers. We talk about respect for authority, for cultural and religious differences, and for the freedom to have those differences. P.M. Forni, in his book, Choosing Civility, Twenty-Five Rules of Considerate Conduct, places a lot of emphasis on self-respect and expands on the civil duty of respecting others’ opinions. 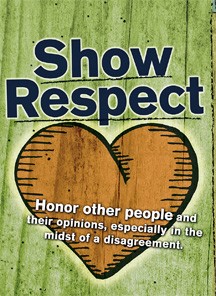 You may have noticed that I have not rushed into defining respect. You are right, and the reason is that this is where it starts to get complicated. Conventional ways of defining and speaking about respect take us in conflicting directions. When respect is defined as a feeling of deep admiration for someone, does this mean that we must admire someone in order to respect him? And does its negative corollary also apply?

A second definition of respect is having regard for the feelings, right or traditions of others, such as respect for autonomy or human rights. Is it enough to respect a person’s rights or beliefs while not respecting the person, and vice versa? We commonly speak in terms of deserving respect, earning respect, losing respect, being worthy of respect. We make respect conditional. It is also commonly suggested that respect is solely a matter of following norms and rules of social engagement and living by the Golden Rule.

The matter gets even more complicated when we add the element of respecting those individuals whose values or behaviors we vehemently disagree with or abhor. And we ask, “How can we respect someone who does not respect himself?” I really do not have definitive answers to these questions, and I certainly cannot answer them for you. But I can add another dimension to the conversation. If we can develop a definition of respect as recognition of the unconditional value of a person, we are freed from differential value judgments. Liking or not liking someone is no longer a determinant of respect. Even though developing unconditional respect for everyone may feel unnatural, it is not an impossible task.

Most of us would agree that even when feelings of unconditional respect for a person do not come instinctively, we should still act respectfully. Actions and behaviors are certainly important and not to be discounted. However, social scientists and others insist that actions alone are not sufficient for achieving a genuine attitude of respect. We need both the internal belief and the external behaviors, or we end up leading a life of self-deception.

In a civil society, should anyone be denied respect? I realize that the answer to this question is open to debate. And a civil society welcomes and is equipped to have that debate.

Have you witnessed a Random Act of Civility? Let us know about it at [email protected].