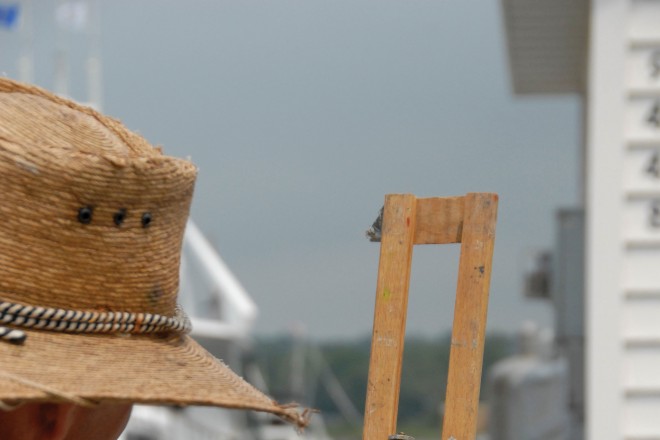 Caution:  Taking in the second annual Door County Plein Air Festival could leave you breathless. First, there’s the beauty of the work of highly-regarded plein air (outdoor) painters. Next, there’s the dizzying schedule of events, from July 20th through August 2nd, hosted by the festival’s sponsor, Peninsula Art School, in Fish Creek. And then there’s the swiftness required of the painters, who are trained to “race the sun” in order to capture the changing light on a landscape.

Nancy King Mertz, a pastel and oil painter from Chicago, will return to the festival this year. A worldwide plein air painter, she makes the connection between her art and the stamina required to be in the festival. “We work so hard at it, we might as well be Olympic artists,” she says. “You have to work quickly, because the light changes every minute. It pushes you to the limit.”

King Mertz’s brushwork also comes with its share of endorphins. “You actually become part of the painting – you remember the sounds around you, you smell the smells, and remember the conversations of the people that come by – it’s a painter’s high,” she says.

Last year, 36 professional plein air painters, from Door County and throughout the United States and Canada, took part in the event. This year, 40 artists have accepted an invitation to participate.

From July 20th through 26th, visitors to Door County will be able to view artists at work outdoors. Some galleries have scheduled plein air events in conjunction with the festival, but for the majority of the time, painters will go where their inspiration takes them. Artists report their locations throughout the days, so Art School staff may inform festival enthusiasts of their whereabouts.

Witnessing the creation of works in progress costs nothing. But for those wanting to enjoy social events with the artists and be privy to early viewing and sales, the Art School offers private, ticketed events. Among them is the Wednesday evening reception with the artists at Maنrhavn, the home and sculpture garden of Virginia and Tom Maher. Their collection of contemporary artwork rivals that of many modern museums.

Freshly painted works will be on display at Peninsula Art School’s Guenzel Gallery throughout the week, but their sale will not be open to the public until July 26th. Those interested in making a purchase may attend the festival’s lively “Quick Paint” auction held at noon at Clark Park in Fish Creek, or at the opening reception that evening from 6:00 to 8:00 pm at the Guenzel Gallery. There is no entry fee for these events. The portion of the “Quick Paint” competition that allows artists not in the festival to vie for a spot as a full-fledged participating artist in the 2009 event will continue this year.

The ticketed Collector’s Gala on the evening of July 25th from 6:00 to 9:00 pm, and the one-hour Palette Sponsor preview, beginning at 5:00 pm that evening, will give serious buyers the first chance to make a purchase. A Palette Sponsor ticket for $175 gives the bearer access to all private events (including the July 20th kick-off barbeque with the artists at the Double A Ranch in Sister Bay) during the festival.

According to Cathy Hoke-Gonzales, Peninsula Art School Executive Director, the school’s 2007 Door County Plein Air Festival was considered to be the next logical step in the non-profit organization’s fundraising activities. “We melded what we had done historically with our annual gala and art auction,” she says. “With the sheer number of painting opportunities throughout Door County, a plein air festival made sense. Also, no one in the Midwest was doing a similar event of this size, or with artists of this high caliber.”

Minnesota oil painter, Scott Lloyd Anderson, has participated in numerous, well-established plein air festivals throughout the United States. He says he’s “grateful” he received an invitation for both years. “There’s a lot of plein air festivals on the West Coast, where California plein air painters get a lot of attention,” he says. “In the Midwest, there’s not a lot of opportunity to be seen.”

In October of 2006, Hoke-Gonzales and Community Relations Director, Cinnamon Rossman, traveled to San Luis Obispo, California, to experience that city’s plein air festival in preparation for managing one for the Art School. “San Luis Obispo provided a good example for us,” Rossman says. “That festival was in place for several years, yet still in a growing period. The growth aspect was important to give us reasonable expectations. Experiencing it from the standpoint of an onlooker allowed us to plan more effectively for visitors.”

Rossman was especially impressed with the role of the volunteers at the California festival. “Having such a large collection of newly-created works, I was amazed at the speed and efficiency of how the volunteers handled the sales – paintings were literally flying out the door,” she says.

The pair came home with a continually expanding to-do list to make a quality plein air festival happen in eight months in what would normally take a year. Powering through with a sporting “build it and they will come” philosophy, the Art School staff studied other festivals via the internet and obtained advice from those in the Door County art community who had attended comparable plein air events.

Finally, a field of professional artists was secured for the untested event, with their lodging provided through volunteer host families. Volunteers were also enlisted to assist with the hanging of hundreds of not-yet-dry paintings in the school’s Guenzel Gallery; to stretch plastic over the frames of the sold, “fresh” works; and to help track each piece of artwork throughout the process until its final sale.

Live painting events were scheduled with area galleries, as well as the social events that continue this year. A trolley tour  to  see the artists at work throughout Fish Creek was also organized. The annual Peninsula Art School Gala and silent auction continued but with the larger scope of showcasing the works of the festival painters.

Bonnita Budysz, a nationally-recognized plein air artist from Two Rivers, Wisconsin, will also return to this year’s Door County Plein Air Festival. As a charter member of the San Luis Obispo Painting Festival, she has an insider’s appreciation of what it takes to pull off such an event. “What [the Art School] did was quite remarkable,” she says. “San Luis Obispo has been put forth as the gold standard. In the Art School’s first year, they were certainly up to the highest standards of the events associated with the San Luis Obispo festival.”

Budysz points out that the Door County festival has an advantage over the popular California plein air festivals she’s attended. “Door County is so accessible,” she says. “The artists and events are all in fairly close proximity. In the central California coast region, you’re looking at over 100 to 150 miles radius of where the artists are painting. It’s not possible to utilize a trolley and have events at galleries and an area like Peninsula Park.”

Rossman can report of tangible proof of the Door County festival’s success. Overall, the school expected to sell a total of 30 to 35 paintings for the entire festival. Final sales tallied closed to 130 works.

Taking direction from a similar event she and Hoke-Gonzales witnessed at the San Luis Obispo, California festival, Rossman says Door County’s Quick Paint “totally blew away all expectations.” She says, “Most of the paintings in the Quick Paint went for three times the artist’s minimum set price. With 32 artists participating, we sold 34 paintings in an hour and a half.”

Because of the enthusiastic response to the festival, Rossman says the Peninsula Art School will have events scheduled every day of the week to cater to visitors needs, especially allowing visitors access to view the artists at work. Also in conjunction with the festival this year, the Art School is offering a three-day plein air painting class, beginning July 17th, with participating artist Brett Weaver from Tennessee. Another plein air class with Doug Diehl, from Arizona, is scheduled during the first week of the festival.

In addition to sales, artists will receive cash prizes awarded through corporate sponsorships. Cellcom (who committed to a three-year sponsorship) and Thrivent Financial will supply $1,000 each for recipients of the Artist’s Choice and People’s Choice Awards. Utrecht Art Supplies is donating $750 for the Second Place Award of Excellence and Associated Bank will provide the $500 Third Place Award of Excellence. Locally-owned Artist’s Guild, an art supply store in Sturgeon Bay, is sponsoring the community portion of the Quick Paint with the donation of art supplies as awards. The festival has also been funded in part from the State of Wisconsin Tourism Department Joint Effort Marketing Grant and a grant from the Wisconsin Arts Board.

With the success of the first plein air festival underscoring this year’s event, Rossman is far from complacent about Peninsula Art School’s duties for 2008. “We have very high standards to live up to, knowing now that everything needs to be better than last year,” she says. “I’d love for every artist in the festival to sell at least one painting.”

King Mertz sold eight paintings last year. Fully aware of what her commitment means as a participating artist, she’s ready for this year’s Door County painting marathon. “Last year, I got the worst case of hives that the doctor in Door County had ever seen,” she says. “I had just returned from plein air painting in Mexico and had taken natural spring baths that had triggered it.  One afternoon I had to rest with my head down on my easel. I was afraid I might be disqualified because I was an artist on steroids.”