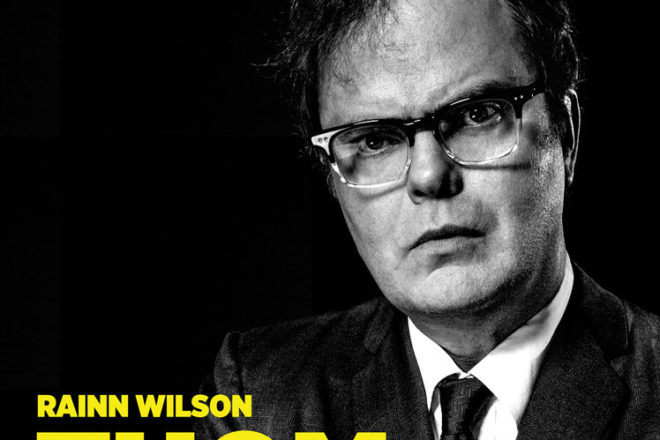 For the third year in a row, Door County residents and visitors will have the opportunity to peer behind the curtain and watch art making in progress. This, of course, refers to the Door Kinetic Arts Festival hosted at Björklunden from June 10 – 15. Building off the success of the previous years, the festival is headlined by Rainn Wilson, best known for playing the character Dwight on nine seasons of The Office. Those who attended the Kinetic Arts Festival in the past know just how unique the experience is.

Eric Simonson, a playwright, had long wanted to put together a festival like the Kinetic Arts Festival. He spent summers in Door County and attended Lawrence University, and he came to associate the county as an inspiring place for his own creative production. “I said to Björklunden, ‘What about if we host a bunch of artists to come up for a week and exchange ideas and work on new work?’ And that’s kind of how it came about.”

Simonson was most inspired by what happens when artists from different disciplines come together. Artists eat and live together during the week, and this setting alone produces life-long collaborations that would have never happened otherwise.

It turns out that this format is just as fascinating for audience members as it is for the artists themselves. People don’t often get to see artists’ work as it is being worked on, changing from minute to minute. But that is exactly what sets the Kinetic Arts Festival apart. “I don’t know of any other festival that does quite what we do with the focus on new works from different disciplines, and the way we bring about interactions between all the projects,” said Alan Kopischke, festival producer.

This year, Rainn Wilson will host a screening of Thom Pain, a film version of the Pulitzer-winning play he performed at the Geffen Theater in Los Angeles. The play is a one-man show starring Wilson, and he will lead a talkback after the screening. Wilson will also be involved in the reading of a screenplay – a collaboration with Simonson.

During the 1940s, a writer named Stetson Kennedy decided to infiltrate the Ku Klux Klan in Georgia to expose their secrets and motivations. After spending time in the Klan, he convinced the makers of the radio program The Adventures of Superman (which had used Nazis as their villain in the previous season) to make the KKK the main villain in the upcoming season. Through the revelations that came out in this radio program, the KKK became a laughingstock and the state of Georgia revoked the Klan’s national corporate charter. Due to Kennedy’s actions, KKK membership decreased by almost half.

There have been a few people who have owned the rights to Kennedy’s story, including Humphrey Bogart and Tobey Maguire, but nothing has ever come of it. Wilson most recently bought the rights to the story and enlisted Simonson to write the screenplay on Kennedy’s life, with the idea that Wilson would play the lead role in the movie. Festival participants will have the opportunity to hear the very first reading of this screenplay, with Rainn Wilson in the role of Stetson Kennedy. This event takes place on Wednesday, June 13 at 8:30 pm.

The event most indicative of the kind of cross-pollination that Kinetic Arts Fest thrives on, is a new play by Keith Huff. Huff told Simonson that he wanted his play to incorporate dancing, so Simonson contacted Julia Rhoads and her dance company Lucky Plush Productions (who had been to the festival in previous years) and asked if they would be interested in the play. Huff and Rhoads began to collaborate and will work together during the festival under the tutelage of director Mark Clements, artistic director of Milwaukee Repertory Theater. On June 15 at 8:30 pm, audiences will have a chance to see a reading of the play, involving dancers performing behind the readers simultaneously. “I don’t know what it’s going to be. I’m excited about it and I know it’s going to be phenomenal,” Simonson said.

There are many more events featured at the festival that simply could not fit in this article:  a film festival featuring Oscar nominees and winners, a cocktail competition with New York Times writer Robert Simonson, a writing workshop with renowned short story writer Holiday Reinhorn – the list goes on. One thing is for sure, you won’t want to miss out on this unique event that resembles nothing else in Door County in terms of mission and scale.

“I think people are starting to figure out who we are and what we are doing, and their excitement about it is really encouraging,” said Kopischke.

What started out as a pet project for Eric Simonson has become a main summer attraction in Door County. But Simonson’s interests have never wavered. “I’ve always been fascinated with process. We have a space where we can invite artists to create, so I want to take advantage of that. It’s a summer camp for artists.”

Tickets for each night of events is $10. Festival passes, which get you into all of the events, are $30. A Premium Pass, $50, gains you admission to a private reception with Wilson, Reinhorn and other Door Kinetic Arts Festival notables. For more information on the festival and the complete lineup of events, visit doorkinetic.com.