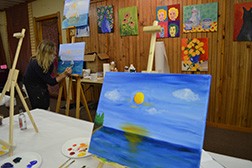 If there is one thing to note about taking a painting class with Door County artist Jennifer Aldrich, it is this: she wants you to have fun finding your inner artist. And if that means holding a paintbrush in one hand and a glass of wine in the other, so be it.

Aldrich is among the wave of art instructors turning their focus toward encouraging artistic freedom in seasoned painters and clueless beginners by offering enthusiastic instruction with a side of beer or wine.

Mixing drinking with painting is a relatively new concept in the Midwest but one that has been chugging along for nearly a decade down South.

Louisiana-based Corks N Canvas co-founders Renee Maloney and Cathy Deano are often credited with kicking off the trend in the United States in 2007 and in the eight years since, they have franchised the business (changing the name to Painting with a Twist in 2009) and opened 228 locations across the United States.

It was through the location in St. Petersburg, Florida that Aldrich (whose main focus is art therapy) was introduced to the concept of mixing art with alcohol. After moving to Door County, she began teaching a similar class in Sturgeon Bay.

When her partner, Andria Nikoupolis-Weliky, opened Andria’s Dancin’ On The Door in Egg Harbor last fall, Aldrich decided to bring her knack for teaching and love for art to the studio by offering Paint & Sip, a class focused on raising a glass, paintbrush and spirits.

“This class is more of an entertainment or social painting, if you will,” Aldrich explains. “Sometimes it’s more fun to have a focus or more intellectual activity to do than just go sit out at a bar.” 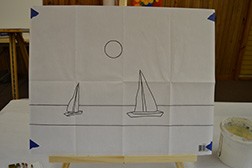 On this rainy Thursday evening in June, nothing could be more accurate. In the art studio, four tables hold two 16” x 20” blank canvases each, an array of brushes and paints set out before them. At the front of the room propped up on an easel, Aldrich’s rendition of tonight’s painting, “Sunset Drift,” (an acrylic version of two lazy sailboats drifting along in Egg Harbor) stares back at tonight’s students.

All seven of us (of varying ages and artistic talents) are told that in just two hours, we too will have our own version of Egg Harbor immortalized on canvas. As if that task wasn’t daunting enough, it had just dawned on me that I have never actually painted on canvas before.

That’s where the “and sip” part comes in handy, Aldrich assures me.

“I think the sipping part makes them (students) feel more comfortable like, ‘Oh, it’s no big deal if I mess up,’” Aldrich says. “It puts the person in a more relaxed mood. It creates an atmosphere of more relaxation. If you’re taking a painting class, it’s more about learning the process of creating a piece of art whereas this class is more about enjoying the process of creating art. In those terms, it’s…not necessarily about the finished product, like art as a noun, it’s more of art as a verb. It’s ‘I’m doing. I’m painting.’”

And soon enough, we are.

A paper template over carbon copy paper is used to help trace the image onto the canvas for reference, another rest-assuring moment provided by Aldrich, whose focus is on making the evening as simple as possible. 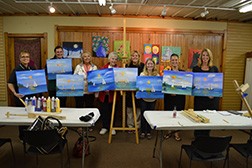 The group of painters from the June 11 Paint & Sip held at Andria’s Dancin’ On The Door.

Then comes the paint. We start by creating the harbor with the array of blues on our paper plate palette, some of us more focused on duplicating Aldrich’s perfect bright turquoise waters than others. But as the wine flowed, ideas of perfection and coloring between the lines were abandoned in favor of doing the best you could.

It’s Aldrich’s goal, but she certainly doesn’t push it. That’s where her art therapy background comes in handy – she is an encourager and on the tail end of the workweek (a Thursday evening, nonetheless), it is that encouragement that reminds us we are here for fun, not perfection.

“You want people to have fun and not be frustrated,” Aldrich says. “That’s the whole goal with a Paint & Sip class – you want people to be able to enjoy themselves. The most rewarding thing is to see someone who is totally apprehensive to put paint on canvas or someone who says, ‘Well I can’t even draw a stick figure,’ and you turn them from that into being completely excited and not wanting the class to end.”

Midway through the class, after sky and clouds were made to accompany our harbors, we are encouraged to stand up and take a look at what our fellow classmates are creating.

Not a single painting looks the same. Doubts of our own abilities arise but are quickly quashed as the compliments flow among students.

“I really like the reflection of the sun on the water in your painting!”

“Oh! This looks like the harbor at nighttime. How peaceful!” 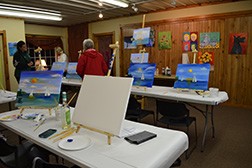 “Whoa. Your clouds are really good.”

By the end of the night, I don’t think it’s a stretch to say that we all started to believe that our clouds (and sailboats, and trees) were really good – whether that was the effect of lowered inhibitions and great teaching or the wine, I’m not sure, but it was definitely the desired result of the class.

“What really makes me want to do this and continue to do this is when I have people say, ‘I never thought I could paint. I never thought I was creative.’ And I disagree because everybody’s creative,” Aldrich says. “They just have this stigma in their head that when they were in grade school, they couldn’t do what the teacher told them to do … what I want to do is break all those rules, I want to say you don’t have to do it that way.”

Paint & Sip classes are held on Thursday evenings from 7 – 9 pm at Andria’s Dancin’ On The Door, 4614 Harbor School Road in Egg Harbor. Classes are $35 each. Reservations are required and can be made by calling the studio at 920.868.5089. The selected painting of the week may be viewed on the Facebook page, “Andria’s Dancin’ On The Door School of Dance LLC.” Private parties are also an option and may request a custom painting for their class.