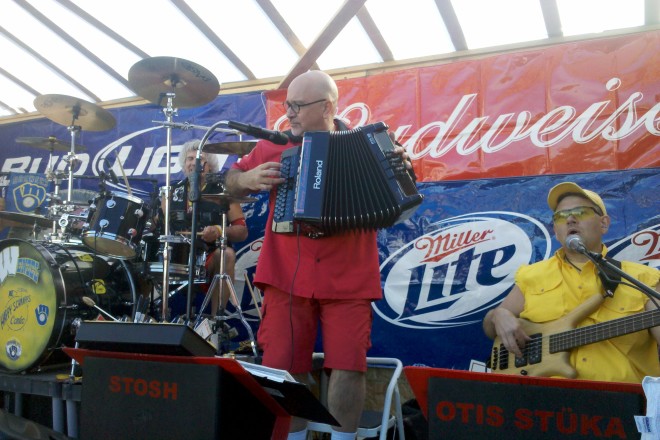 For nearly three decades, Fish Creek’s Winter Festival has become the Door County event most known for a hodgepodge of random, hokey events and competitions – an oversized kickball tournament, minnow racing, a bike toss, and a Stumpf Fiddle Contest among them. So it’s only appropriate that the fun and games are accompanied by as random and hokey of a musical group, the Happy Schnapps Combo.

The Happy Schnapps Combo has been bringing its signature brand of Wisco humor to festivals across the state for nearly as long as the Winter Festival has been around. Though its lineup has changed from its inception in 1991, its mission of making “fun music that you can drink to” has remained the same.

“The Schnappers are all about celebrating Wisconsin’s culture of polka, beer and good times, and sometimes paying the price for it the next day,” said the Combo’s frontman of eight years, Dave Dvorak.

If you’ve spent any amount of time at Sister Bay’s Fall Festival, there’s a good chance you’ve heard the band doing its thing. And what is that thing, exactly? Sharing a love for Wisconsin’s culture – booze, brats and all – through polka.

To date, that love has come out through a number of albums, including 100 Proof (on which the popular song, “The Bears Still Suck Polka,” debuted) and Raise It! (with its popular tunes “No, I Don’t Wanna Do Dat,” and “Fleet Farm (A Love Song).”

Both of those albums came under the leadership of Happy Schnapps Combo founder, songwriter, producer and guitarist Jim Krueger until his death in 1993. But that didn’t mark the end of the Happy Schnapps Combo. Believing that the show must go on, they released several more albums: Behind Bars (1994), Polka Power! (1996), Beer Muscle (1999), Wisconsin Soul (Live Once) (2003), and their most recent release, Vermox and Vomit (June 2015).

Dvorak says the dozen years between its last two albums is a testament to the quality of music left behind by Jim Krueger, whose brother Rich “Wenzel” Krueger is the only remaining original member of the group.

“I feel humbled that we have all this great music that Wenzel’s brother Jim wrote and that we’re able to keep it alive even after he passed away. It’s pretty cool,” Dvorak said. “… It’s hard to find material that’s better than the stuff we already have so we took a couple of obscure songs and an original song that one of our fill-in bass players wrote called ‘Make Your Liver Giver’ and we did a couple of older songs and thus we’ve got the Vermox and Vomit album.”

Vermox and Vomit is the only album Dvorak has played on so far but it stays well in line with what the band members – each of whom has their own Wisconsin-esque stage name (Dave is “Stosh Dombrowski,” Rich is “Wenzel,” and the third of the group’s core trio, Larry Burns, is “Kaiser Buerner von Kraut”) feel is true to Wisconsin’s roots.

“Vermox is a drink, they don’t make it anymore, it was a mixture of whiskey and vermouth; it was the kind of drink that you’d go into a corner bar and say, ‘Gimme a bump and a beer,’ and they’d give you a shot of vermox and a Kingsbury,” Dvorak said. “It’s an acquired taste, thus the ‘vomit’ portion of this album. We’re all about the old timey – old timey music, old timey beer. Anything Wisconsin. Wisconsin has a unique culture – it’s not something to be over-legislated or embarrassed about. It’s who we are. We can celebrate. Politically correct people like to celebrate other cultures; we think there’s nothing wrong with celebrating our culture.”

That culture and the state’s rich history are something the Happy Schnapps Combo hopes to integrate themselves into, one “youse guys,” “over dere” and “yah, yah, HEY!” at a time.

“The reason I joined the Combo was because I was thinking that someday there’s going to be a Happy Schnapps Combo exhibit at the Wisconsin History Museum and I thought, ‘Hey that’s something that I want to be a part of,’ because it really is something unique and we have to keep under the radar a little bit with some of the stuff,” Dvorak said. “Mostly it’s all fun and good natured, we don’t do anything that’s hurtful or hateful, we just like being politically incorrect.”

The Happy Schnapps Combo will perform at 3 pm on Saturday, Feb. 6 under the main tent at Fish Creek’s Winter Festival.