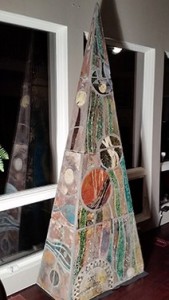 Obelisk by Dee and Bruce Santorini.

Dee Santorini kind of smells like smoke and there’s a residue of ash in her hair.

“I’m just taking the last pieces out of my raku kiln,” says Santorini.

After taking the clay pieces out of the kiln, Santorini works the tongs around the clay and swings it up out of the kiln. She carries it to the sandpit, where she sets down the hot piece of clay. She then drops her tongs, rushes over to grab a washtub full of shredded paper and wood shavings, and dumps it on top of the piece. Smoke billows out around the edges.

“Raku is magic,” says Santorini. “It’s mostly the smoke. It seeps into the unglazed clay and turns the white clay a smoky black color. Then it gets into your glaze, and makes it hazy and metallic looking.”

Santorini has built an eight-foot obelisk for the Labor Day weekend art show at Gills Rock Coffee. Basically a four-sided pyramid, she and husband Bruce Santorini built a structure that the clay panels rest on. Then everything is placed on the structure, glued down, grouted and sealed.

“We participated in Egg Harbor’s 50th anniversary, producing a raku-fired egg that lit up. It just seems right to bring our new obelisk to Door County.”