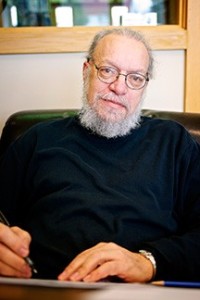 A March 25 entry in Arem Arvinson Log (An Occasional Glimpse into the Voyage from the Helmsman Ralph Murre) reads, “A funny thing happened on the way to the podium. As a result of a process totally mysterious to me, I have been named poet laureate of Door County, Wisconsin.”

Murre (pronounced Murray) says that it is a “truly wonderful honor, especially in view of how many good poets there are in Door County.” He also noted that he has always liked to think of himself as a bit of a rogue, “not fully acceptable.”

Most of Murre’s growing-up years were spent on the family farm near Kewaskum. His roguish bent is evident in a statement from his internet post, Your Daily Poem: “I am a recovering Wisconsin farm boy who has taken to poetry instead of plowing, since the pay rate is about the same, and the females involved tend to be human rather than Holstein.”

Murre had lived in Door County most of the time since the late 1960s.

The eulogy he wrote for his father’s funeral in 1999 was, Murre says, the beginning of thinking of himself as a writer. A couple of years later, he really began to write, although it has never been a full-time job.

“I’ve had about 30 different occupations,” he says, “primarily as an architect.”

He began work for an architectural firm in Milwaukee in 1965 and has been involved in the field off and on ever since. Even today, as an established poet, he continues to be active in home design, while devoting no more than one-third of his time to writing.

Murre recognizes the late Norbert Blei as the person who gave him the most encouragement.

“If he took an interest in you, he could be an amazing teacher and mentor,” Murre says. “He wasn’t even aware that he was teaching. He’d just show you things he thought you should be reading, depending upon where you were in your journey. He was always right on.”

A lifelong reader of both poetry and prose, Murre cites John Steinbeck, W.B. Yeats, Dylan Thomas, the King James Bible and some songwriters “who can turn a phrase well, combining words and rhythm” as influences. “I like to think I include a bit of music in my poetry,” he says.

“It’s hard to know where inspiration comes from. Anything can trigger it,” he continues. “But when I’m feeling particularly uninspired, I turn to the work of Pablo Neruda, the Chilean poet and diplomat.”

It took a long time for Murre to be at all comfortable reading his work publicly.

“My father’s eulogy was one of the hardest things I’ve ever done,” he says, “but ultimately also one of the most rewarding. I still get shaky in public readings, but I’ve come to feel a need to have people hear my words in my voice.”

Murre doesn’t belong to poetry critique groups, “not that I don’t think they provide valuable input, but I don’t like to let other people into my poems until they’re done.” An exception is Sharon Auberle, his partner and poetry confidante. “She is a major influence, a person whose instincts I really trust and a tremendous poet herself.”

Murre is the author of four books – Crude Red Boat (unfortunately now out of print), Psalms, The Price of Gravity and Wind Where Music Was. The first was published by his friend and mentor, Norbert Blei.

The last book, published in 2013, was written collaboratively with Auberle. In a blog interview last April with the Door County Visitor Bureau’s Arts Insider, Murre said, “We like not identifying who wrote which poems. The book is the story of several relationships; there’s really an arc of a story in the collection. Now, we’re looking back at poems we’ve written, some as old as 40 years, and asking ourselves, ‘What’s the poem really about?’ Sometimes when you’re writing a poem, you don’t even know what it’s about.”

Auberle added, “These poems are about love gone aright and awry. We wrote it to honor the people we’ve loved. They are part of who we are.”

Ordering information for these books is available from Murre at [email protected].

The Door County Board of Supervisors established the position of poet laureate in 2010. The late Frances May was honored posthumously as the first poet laureate. Others who have held the title are Barbara Larsen and Estella Lauter.

During his two-year term as poet laureate, Murre hopes to foster greater interest in poetry in the community through public appearances and organizing opportunities for other poets to read their work, something he’s already been doing.