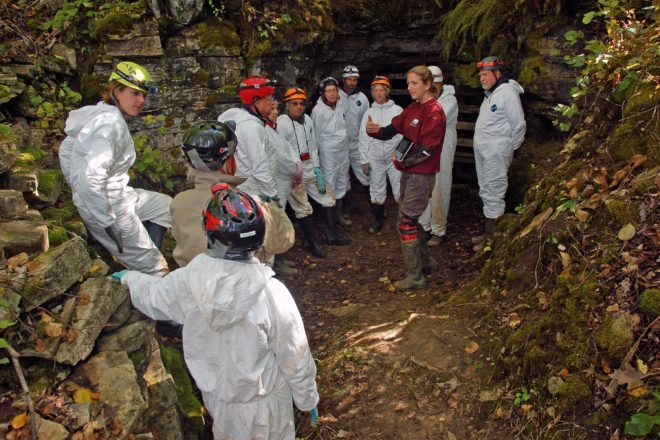 Jennifer Redell, cave and mine specialist with the Wisconsin Department of Natural Resources, prepares a group for a tour of the Horseshoe Bay Cave last September. Photo by Jim Lundstrom.

During a population count in February, the Wisconsin Department of Natural Resources found the hibernating bat population at Horseshoe Bay Cave in Egg Harbor had declined by more than 80 percent, going from more than 1,000 bats in 2015 to only 200 bats this year. The fungal disease white-nose syndrome (WNS) is believed to be at the root of the problem.

“There may be a residual population there that are immune to the disease, but it could wipe out anywhere from 90 to 99 percent of the bats. Very devastating,” said Erik Aleson, director of Door County Parks, which owns the cave.

During the 2015-16 hibernation season, the DNR made 74 site-visits for WNS surveillance and took samples from more than 1,000 hibernating bats. They confirmed that 42 of the sites in 14 counties contained bats with WNS or with the fungus (Pseudogymnoascus destructans) that causes it.

The fungus originated in Eurasia and was accidentally transported here by humans. The fungus disrupts both their hydration and hibernation cycles.

WNS is known to affect hibernating bats, and seven species of bats have been diagnosed with the disease. Five additional species have been found with the fungus, but have not yet developed the disease.

Experts have said as bat populations decline, there will be more mosquitoes, aphids, corn earworm and a host of other pests that are normally consumed by the flying insectivores. A bat can eat as much as 60 percent of its body weight in insects in a single night. Pregnant females can consume more than 100 percent of their body weight in a night.

The economic cost of bat decline could reach into billions with crop loss and the need for additional insecticide applications.

As well as being a significant bat hibernaculum, Horseshoe Bay Cave is one of the longest known caves in Wisconsin.

White-nose syndrome (WNS) is a devastating disease of hibernating bats that has caused the most precipitous decline of North American wildlife in recorded history. It is caused by the fungus Psuedogymnoascus destructans, and is rapidly spreading through cave bat populations across the country causing unprecedented mortality. Since it was first discovered in 2006, WNS has affected 11 cave-hibernating bats, including four endangered species and subspecies of insect-eating bats in the eastern and southern U.S., causing declines approaching 100 percent in some populations. Recent estimates suggest 5.7-6.7 million bats have died in the past seven years. This syndrome poses a severe threat to all four of Wisconsin’s cave bat species.

In February 2006, some 40 miles west of Albany, New York, a caver photographed hibernating bats with an unusual white substance on their muzzles. He noticed several dead bats. The following winter, bats behaving erratically, bats with white noses and a few hundred dead bats in several caves came to the attention of New York biologists, who documented white-nose syndrome (WNS) in January 2007. Named after the distinctive white growth that appears on the nose and wings of affected bats, WNS reached Wisconsin in spring 2014.

Bats are a vital part of many ecosystems. They help control pests and are pollinators and seed-dispersers for countless plants. As predators of biting insects, bats may also play an important role in reducing risk of insect-borne diseases, such as the West-Nile Virus.

You can donate directly to the Wisconsin Bat Conservation Society, an annual membership where groups and citizens can support bat projects in need of immediate funding. These funds will be used for WNS research, landowner support in WNS prevention and control, surveillance, inventory, monitoring, applied management and education about the benefits of bats.

Make your check payable to the “Wisconsin DNR” and send your tax deductible donations to:

Please be sure to note “WI Bat Conservation Society” on the memo line of your check.