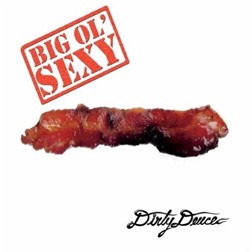 My new favorite slab o’ vinyl features a greasy slab o’ bacon on the cover, hinting at the tasty treats inside.

But I have to admit the first time I saw the cover, I thought the bacon was a turd, which suggests something else entirely. Upon closer examination I was relieved to find that it is indeed bacon.

The record is called Big Ol’ Sexy by Thy Dirty Deuce. It came out in 2012. I’ve known about it since early 2013, but I am easily distracted and, so, just now got my hands on a copy. No matter, for this is one of those rare records for all time.

I now know why sound engineer Billy Triplett told me in an interview last summer – just weeks before he died of a heart attack – that he wanted to help the world discover the music of Thy Dirty Deuce. Billy had engineered many bands in his illustrious career, which is why his enthusiasm for this band was special. He was a true believer.

The band is Rev. Rob Atwood on guitar and vocals, and Jamey “J-Dirt” Clark on drums and harmony.

Billy engineered, mastered and produced the record. It was recorded at Tireless Fred Young’s Second Story Studio in Sturgeon Bay, and Tireless Fred contributed slide guitar on the last song on side two, “All Alone.” melaniejane of the Holiday Music Motel and half of the duo Purgatory Hill played cello and sang on “All Alone” as well. But the record is all Rob and Jamie (and Billy crisply capturing their electric sound).

I’ve seen and enjoyed Jamie’s playing at some of the Wednesday night Poh’s jam sessions in Sturgeon Bay, but I’ve only seen Jamie and Rob together once, in rehearsal for the Play It Forward gig at the Door Community Auditorium last September. Even in rehearsal, Thy Dirty Deuce was awesome.

So what do I love about the record?

Two guys making just enough music, music that is raw and refined. What’s not to love?

Just like the bacon on the cover, it’s crisp and chewy. Meaty, beaty, big and bouncy.

Just try to stop yourself from locking into Thy Dirty Deuce’s snaky rhythm, refrain from slapping something or snapping your fingers or playing an air power chord. Thy Dirty Deuce knows the hoodoo. Check ‘em out on Facebook.