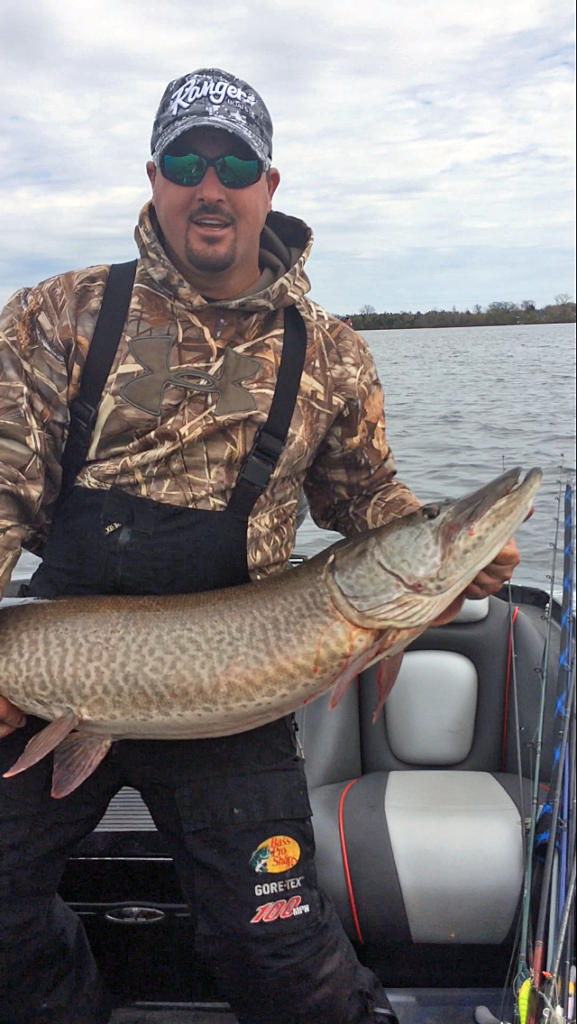 Joe Gensini with the musky he landed while fishing for smallmouth bass in Green Bay. Submitted.

The waters on both sides of the peninsula attract anglers from far and wide in pursuit of salmon, trout, smallmouth bass and more.

But Wisconsin’s top predator fish hasn’t gained much of a reputation in Door County.

So, when a two-man team practicing for a smallmouth bass tournament caught, measured, photographed and released a potential record-sized muskellunge not far from Sturgeon Bay, muskie fans took notice.

“This fish has caused quite a stir and I never set out for one of them. I’m a bass fisherman and I happened to catch a muskie,” said Joe Gensini, a north-central Illinois resident who fishes three different national and Midwest bass tournament circuits and landed a 60¾-inch muskie on May 9. That was 11 days before the open season for the toothy fish.

The accidental catch gained Gensini – and fishing teammate Paul Malone of Iowa – more fame than anything Gensini had done in a decade of fishing in tournaments.

Preparing for the mid-May Cabela’s North American Bass Circuit tournament, Gensini was fishing for smallmouth in 7 to 10 feet of water in Little Sturgeon Bay and using a homemade, eighth-ounce, 1½-inch-long black hair jig when he thought the hook snagged on something at a drop-off.

After the catch, he got a call from Musky Hunter magazine, and told an author that he just felt a little “tink” without much reaction, until the heavy object started to fight.

Since catching the fish, he received attention not only from fellow tournament anglers and Musky Hunter but also was taped on the Fishnstixtv Facebook site of hall of fame angler Bob Mehsikomer.

It’s a lot of attention for a fish that grabbed a tiny lure.

The fish’s girth (like your waist size once, perhaps) measured 28½ inches. He said Mehsikomer and Musky Hunter estimated it weighed between 57 and 60 pounds. The state record, from Chippewa Flowage, measured 63.5 inches and 69 pounds, 11 ounces.

“At this time of year, coming out of winter, it was a little skinny,” Gensini said. “If I’d have caught that same fish this fall, it would have weighed 8-9 pounds more.”

The lunker won’t count as a record of any type, not even for the eight-pound-test line Gensini was using when he hooked it. It took more than an hour to land, and he handed the rod to partner Malone near the end. They used the trolling motor to move with the fish and avoid breaking the line. He also later found out that in spring before May 20, when the muskellunge season opened, they weren’t even supposed to land the fish.

“We tried to land it to catch and release the fish  – and to get my jig back,” he said.

How common are Green Bay Muskellunge?

“We get a few,” said Adam Neu, a smallmouth, pike and walleye fishing fanatic who works at Howie’s Tackle in Sturgeon Bay. “It’s not super common for a bass guy to catch one  – we’ve heard of like two caught this year on bass lures (other than the 60-incher).”

In fall, muskellunge anglers start to show up, so it’s not a total secret that the barracuda-like fish hang out here. Neu said there are a lot of 40- to 44-inch muskies in the southern portions of Green Bay, and then farther north toward Sturgeon Bay, trophy-sized fish lurk.

“There’s some really, really big fish in the bay; that one,” he said of Gensini and Malone’s fish, “was really big.”

Jerry MacMillin, an RV salesman whose family ran Mac’s Sporting Goods of Sturgeon Bay until it closed 16 years ago, said he’s hearing about more people pursuing muskellunge today in Green Bay than decades ago. He and Neu also said most of the folks targeting muskies have their own lures and gear, so they arrive and leave pretty quietly.

Decades ago, before the Coho and Chinook salmon became a major target, said MacMillin, trophy fishermen targeted huge lake trout. Those trout fell out of favor, partly because of oily flesh (which makes them fantastic smoked, he said). He said they also just kind of come up from the bottom like a log – they won’t fight nearly as hard as salmon.

Fewer lake trout are caught, too, because to catch them, anglers were basically bouncing baits behind huge sinkers on the bottom. They troll to find the salmon suspended and rainbow trout nearer to the surface.

As for the muskellunge, Neu said there’s no reason to think record fish can’t come from Lake Michigan or Green Bay rather than more famous haunts such as the Chippewa Flowage in northern Wisconsin or the famous stretches of the St. Lawrence River west of Niagara Falls.

A couple of days after they hauled in the lunker, Gensini and Malone finished 26th in the tournament. He said they weren’t disappointed in their catch though, as they and all the teams caught a lot of big smallmouth.

“That fishery is so good. We finished middle of the pack in that tournament but the weights were just phenomenal,” he said of the event that had a weigh-in at Sturgeon Bay.

He said it was his first time competing in Door County, but not his first trip here by any means. He said he loves fishing for fun on either side of Door County.

In late May, he returned, and he and his son caught and released dozens of smallmouth in the 3½- to 6-pound range on the Lake Michigan side of Door County.

“It’s awesome. We just love it. My nine-year-old son just has a ball and I can’t say I’m much different,” Gensini said.