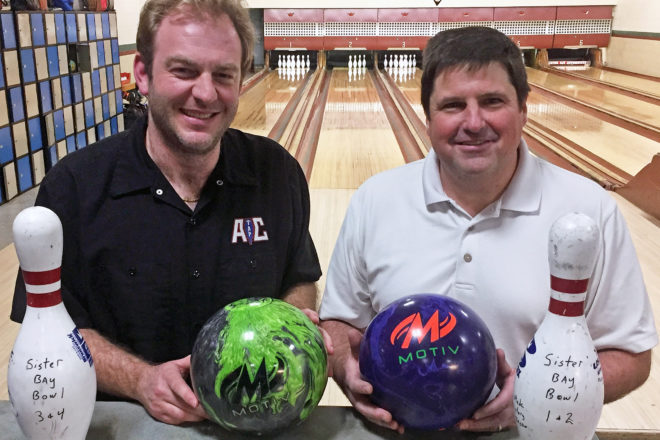 History was made in Sister Bay on Feb. 1 during league play when two men bowled perfect games at Sister Bay Bowl.

“It was a good night,” said Mike Snell, who bowled the first perfect game of the night during the first game in Thursday night league play at Sister Bay Bowl.

“It means a lot at Sister Bay Bowl,” Snell continued. “It’s tough conditions up there. There have not been a lot of 300 games there, maybe a dozen. When you think about 12 over 60 years and then to have two in one night, is kind of insane. That’s kind of an accomplishment.”

Snell said he tried to fight the rising excitement as he realized what was happening and bowl through it.

“I got to six strikes and thought, I’ve got to get another six. Doubling it, that’s hard,” he said. “Then I got to nine and thought, this is happening, maybe. I tried to not think about it and just play it cool.”

After earning his 300, Snell turned to Aaron Shepit, who has bowled three 300 games at Apple Valley Lanes in Sturgeon Bay in the last two months, and said these fateful words, “Aaron, I’ve got something on you. You’ve never hit a 300 at Sister Bay Bowl.”

In hindsight, Snell said, “Should have kept my mouth shut because he hit it in the next game.”

“Every time I looked over I saw him striking,” Shepit said of Snell’s perfect game. “It was exciting. I was so happy for Mike. It was neat to see him do that.”

And then Shepit followed with his fourth perfect game in two months, and his first at Sister Bay Bowl.

“It’s been crazy this season,” he said. “I’ve never had four in one season. I’m not going to lie, it’s been nice.”

Shepit has an easy answer for his recent success.

“A friend of mine got me hooked on another bowling ball company that I’ve been throwing exclusively, a Motiv,” he said. “I really like it. I’ve been telling people it’s nice to have a bowling ball working with you instead of against you. I’m not really throwing the ball much different than I ever have in the past.”

Shepit reiterated Snell’s comments on how difficult it is to throw a perfect game at the Bowl.

“It’s very difficult to have a 300 there,” he said. “The lanes are old. They keep them in good shape, but it’s definitely more difficult. They’re wooden lanes, not synthetic like most of the centers are now. And then to have two of them in one night is pretty incredible.”

In fact, Jason Daubner wondered in his email about the two perfect games at the Bowl “how many times it has ever happened in Door County bowling history.”

According to John Moore at Apple Valley Lanes, it has happened twice in recent history – on March 13, 2012, Jeff Hansen and Todd Cater threw perfect games, and then during the county tournament on Jan. 19, 2014, Cubby Hartl and Mike Cuculi also threw matching perfect games.