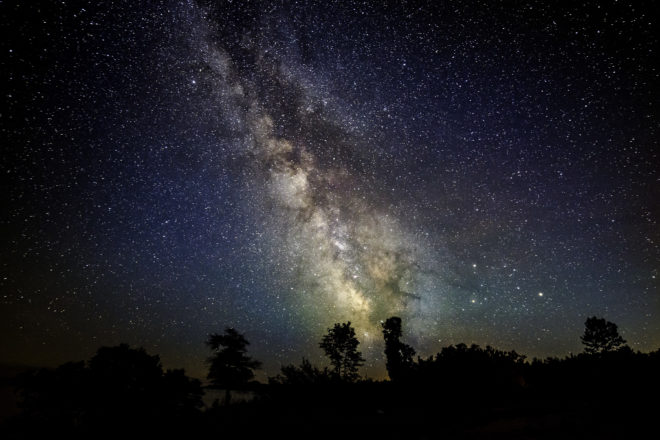 For Gills Rock photographer Denny Moutray, “the thrill of the hunt” drives him to pick up his camera. As he has been coming to the Door Peninsula since 1970, he has shot much of the area’s flora and fauna, the shoreline and the forests, the orchards and old buildings. Now looking for new frontiers, “I reach out to the sky,” he said.

One of the images he has captured is featured on the cover of Capture Door County: Seasons Behind the Door, a book of photographs sponsored by the Door County Visitor Bureau. The bright lights of the Aurora Borealis are highlighted against the night sky in a photograph that he took from the shoreline of his house in Gills Rock.

As a self-taught photographer, Moutray had been taking pictures all of his life. “I had boxes of snapshots from trips I have taken,” he said.

“My brother taught art and photography,” he continued, “and he said it wasn’t the quality of my work” that impressed him “but that I have a great eye.” It’s the hardest thing to teach kids, his brother told him, but said that it came naturally to him. 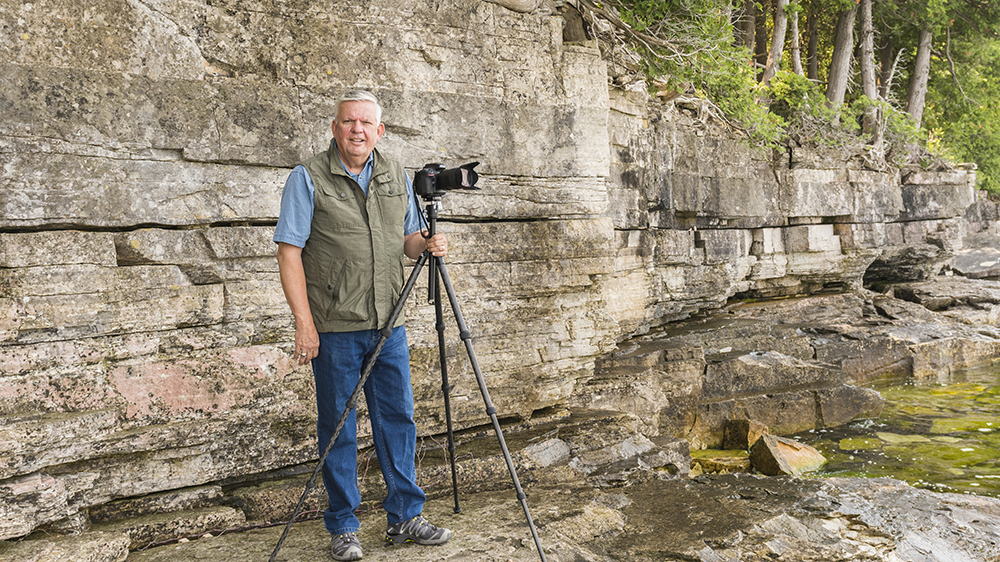 A few years before he retired as a State Farm Insurance executive, Moutray was looking at photographs in the Frykman Gallery. “That is something I could get into,” he thought, and following Lucas Frykman’s advice, purchased a good entry-level camera.

As a student, young Dennis had been a business education major at Eastern Illinois University where he met his wife Peggy. He taught high school for three years while working summers at a clothing store for his father-in-law. One of his customers offered him a full-time job as a State Farm Insurance agent. He not only found that he enjoyed the work more than he had teaching, but his aptitude for business took him up the corporate ladder, earning a promotion as agency vice president in Cincinnati, Ohio, a position from which he retired in 2010.

During much of his career he lived in Texas, where his son, daughter and grandchildren still live. Now he and his wife spend summers in Gills Rock and winters in Austin.

Gills Rock is a special place for Moutray as he and his wife honeymooned there, and have been returning every year for their anniversary. His parents-in-law owned a summer place in the village, and his wife had attended the local Camp Zion, a church camp, during her early teens.

In 1999 he and his wife moved into their first house in Gills Rock, and now in their retirement live in a new home that his wife designed, one nestled in a woodland setting with a view of the lake, a casually elegant structure with space for his photography studio.

“I was in a high stress job,” Moutray said, and found relaxation not only in traveling widely but through hobbies, including motorcycles, golf and photography. “I had no problem keeping busy, but I got hooked on photography, competing with myself. 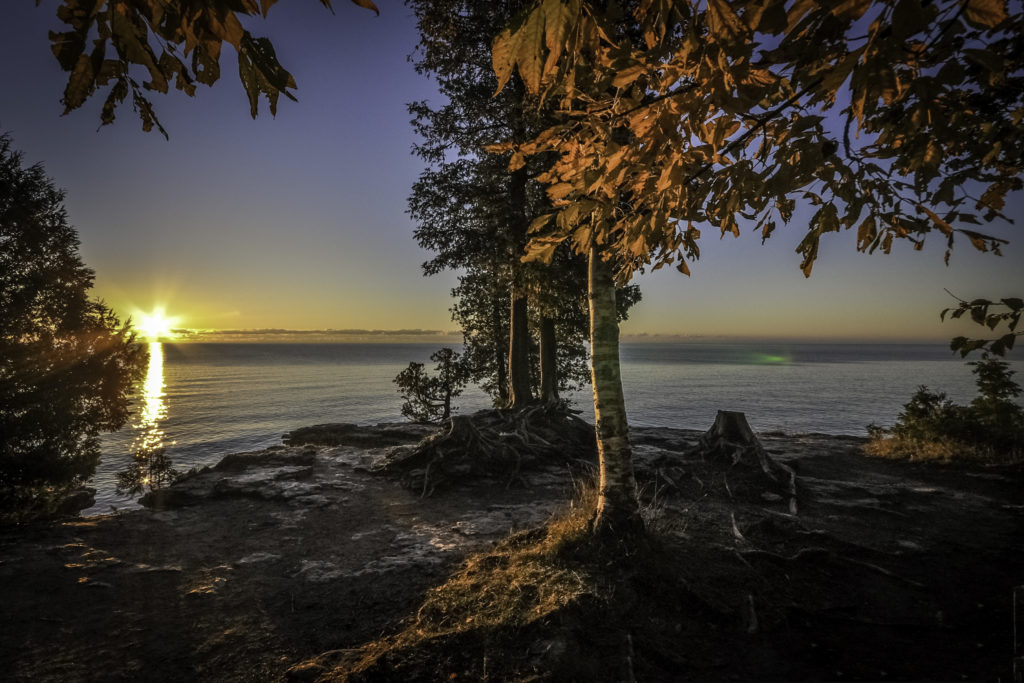 “A New Day” by Denny Moutray.

“What I realized,” he continued, “was how much there is out there that I had never seen before, and now I see things in a different way.”

A number of Door County’s professional photographers were instrumental in helping bring about this change in Moutray’s vision.

“Dan Anderson was responsible for me getting into this,” Moutray said. He had taken a winter landscape class taught jointly by Anderson and Suzanne Rose. Students were sent into the wild to shoot photos and then returned to the classroom for criticism.

Anderson asked Moutray, “What are you going to do with your images?” and he answered, “I don’t have the foggiest idea!”

“You should figure it out, because you are good enough to frame and sell them in a gallery,” Anderson told him.

The instructors recommended that he contact the Door County Art League Gallery formerly located in the Top of the Hill Shops in Fish Creek. “The following spring they had a spot for me,” he said. “That’s how I got started!”

He had been selling his work in the gallery since 2010, and now in the Gills Rock Simply Scandinavian shop and the Sister Bay Trading Company showroom.

Moutray characterizes himself as an active person, sometimes to his disadvantage. In one of her classes Rose told him, “You’re a good photographer, but you need to slow down! Look for what other people don’t see.”

He discovered the wisdom of her words as he realized that a photographer needs to get into the environment of his subject, “to look around, become a part of it.” 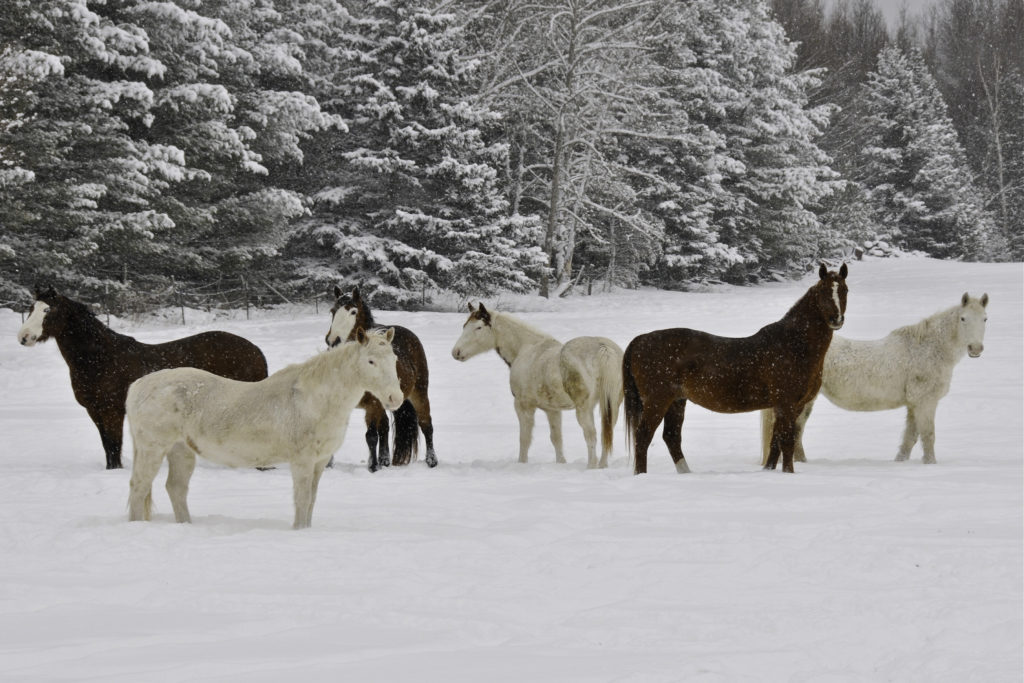 “The Meeting” by Denny Moutray.

Not long ago he took his camera to an orchard that was in bloom. “What I photographed was what I hadn’t seen before.” Her advice to slow down was her greatest influence on him, he said.

Rose recalls having Moutray in her workshop as a student, a time when he rode with her as they drove from site to site shooting images. “He has a great eye,” she said, “and is fearless about photography. He’s very artful in observation, looks at the ordinary to make it extraordinary,” a basic skill for a fine arts photographer.

“He has worked full circle,” she continued, “and is not only a good photographer, but a great printer.” Subsequently his work sells.

And sometimes his work makes an impact in unexpected ways. Highway 42 follows a series of curves from Gills Rock to the Northport ferry dock. A hospital in New Zealand requested permission to use his curvy road image on a poster with the slogan “Road to Recovery” for a campaign promoting cancer treatment.

“I get emails from people around the world wanting to know where it is,” he said.

A visit to Moutray’s online portfolio shows the scope of his subject matter, not only Door County, but the hill country of Texas along with scenes from his travels. However, he has a fondness for his “new frontier” in photography:  exploration of the night sky.

“My mentor was Lucas Frykman,” Moutray said. “Lucas advised, ‘Start here, you learn to play around, trial and error.’”

Frykman recalls Moutray in the class at the Peninsula School of Art that he and his photographer wife Heather taught. “We showed him the basics,” Frykman said, “and told him, ‘You can do this!’

“But his success is all him,” Frykman added. “He put in the time and did the real work.”

Moutray used trial and error to get the settings correct, and to learn that a night image is seen with the naked eye for a split second, but the camera sees a 10 – 30 second exposure. “That’s why they look so bright,” he explained of his night images. 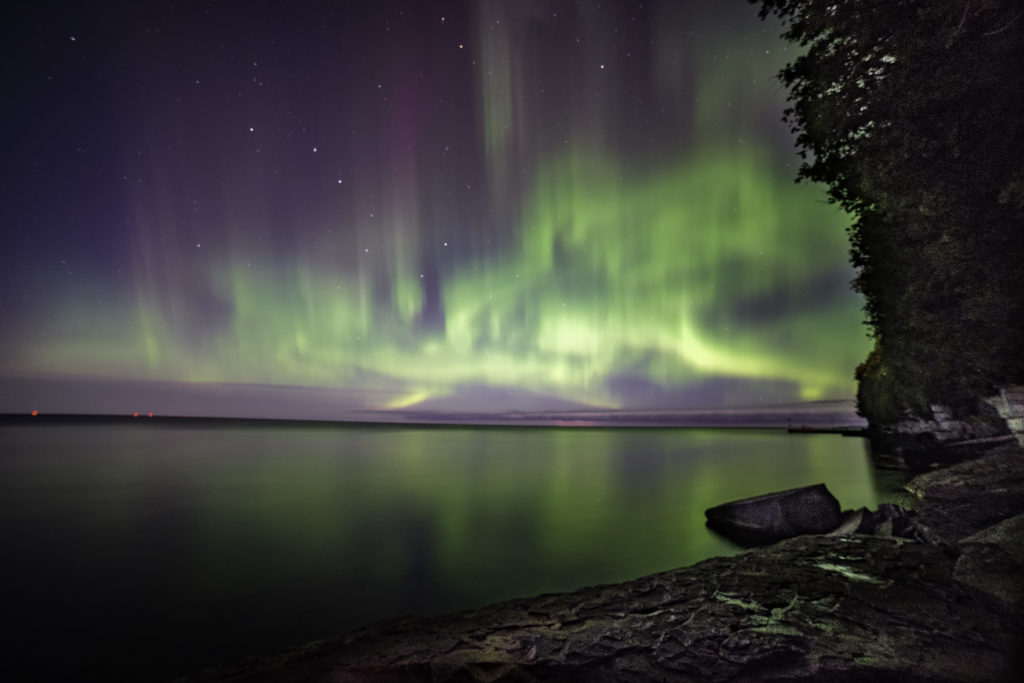 “After Hours” by Denny Moutray.

Many of his northern lights photos are taken from the shore near his home, but he doesn’t have to spend hours skulking along the water’s edge waiting for them to appear. Instead he relies on the smartphone application Aurora Alert that notifies him not only when a display will occur, but predicts the brightness on a Kp index from 1 – 9.

When his phone dings in the middle of the night, he gets dressed, grabs his gear, and heads out into the darkness to set up his tripod.

“I know what to look for,” he said, and now when the lights appear, it only takes him about 10 minutes to get a photo.

“There’s nothing better than a Door County night sky,” Moutray said. “It’s dark. I can sit at my shoreline and watch meteor showers, the lighthouse on Pilot Island.”