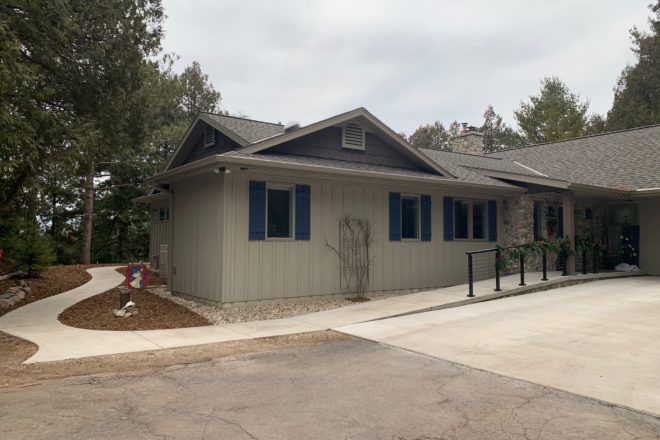 When it came time to remodel their home on Glidden Drive, the Zettels renovated with aging in mind. A back walkway was widened for wheelchair and walker access, a ramp and railing were added to the stoop, and steps and height variations were eliminated wherever possible. Photo by Myles Dannhausen Jr.

Visitors to Cheryl and Hugh Zettel’s house walk up a ramp to the front door instead of climbing stairs. It’s a subtle detail that you might notice only if you were using a walker or wheelchair. And that’s exactly the point.

Neither Zettel uses a wheelchair or walker – right now. (Full disclosure: They’re my aunt and uncle.) When they bought their Sturgeon Bay home in 2014, they planned for it to be their “last house”: the place where they’ll live until they, well, die. So as they were planning extensive renovations, they included things that would allow them to live safely and comfortably in the home even if they have mobility issues or need to use wheelchairs in the future.

The concept is called aging in place, and the Zettels are hardly alone in their planning. Jeff Dorner, designer and estimator at Van’s Lumber & Custom Builders – the contractor for the Zettels’ renovation – said that at least 20 percent of his projects involve aging-in-place design.

“In today’s world, [aging-in-place design] is very typical,” Dorner said. “Having no step between the house and the garage is very common. Having houses that are handicapped accessible with roll-in showers is a good portion of our business.”

The Zettels’ master bathroom has a roll-in shower with a fold-down bench and handheld showerhead, plus a section of the vanity that was left open underneath so that someone in a wheelchair could roll in and easily reach the counter.

The Zettels wanted a bathtub in the guest bathroom and chose one with a low profile so that users don’t need to lift their legs very high to get in. Both bathrooms have grab bars in strategic locations for safety.

Throughout the house, the doors and hallways are 36 inches wide to accommodate a wheelchair, and hard flooring instead of carpet is another key to making the home wheelchair friendly.

Many of the aging-in-place elements are so subtle that you’d never know they were included for that purpose. Doors have handles instead of knobs, for example, because they’re easier to grip. The kitchen island is on rollers so it can be moved to the side to make more room.

Even the casement windows were chosen for a reason: “Because you have the turn crank at the bottom,” Hugh said, “as opposed to trying to deal with double-hung windows, where you have to unlatch it and then try to lift up.”

The Zettels also included some technology that will solve a problem they don’t currently have, but may in the future.

“We have small awning windows in our master bedroom, and our headboard is there, so we wouldn’t be able to lift the shades as we get older,” Hugh said. “So we had power shades installed that operate with a remote.”

If this all sounds like a lot of details, it is. So where do you start? For the Zettels, it started with personal experience. Cheryl’s mom uses a walker and wheelchair, and when she visited their previous home, the couple noticed certain things that were challenging.

“For Cheryl’s mom,” Hugh said, “even going two steps from the garage to the mudroom was a challenge. We started thinking, ‘When we fix our [Sturgeon Bay] house, we know we’ll be entertaining her and others, and we’ve got to make it easier for them to get in and out of the house.’” Those things were in the back of our minds.”

“The biggest thing is research,” Cheryl emphasized. “We put a lot of thought into this house.”

Jake Erickson, director of the Aging and Disability Resource Center (ADRC) of Door County, is a big proponent of planning ahead when it comes to aging in place.

“The majority of people, the reason they come in to see us is to explore ways that they can stay in their home safely or more independently,” he said.

Erickson encourages people to talk to ADRC staff about resources and strategies for living in their homes as long as possible. He acknowledges that this kind of long-term planning often forces people to face some difficult scenarios, but he argues it’s worth it.

“We can do quite a bit,” Erickson said, “and oftentimes there are more options the earlier you look into something.”

Dorner agrees it’s best to talk to an expert about the whole picture – instead of just doing one or two quick fixes – so you don’t end up redoing something later that you’ve already done.

“It’s better to have a long-term plan, even if you can’t afford it all at once,” he said.

When it comes to the cost of aging-in-place renovations, Dorner said there’s no standard number because every house is different. For new builds, though, he said people can expect to spend an extra $10,000-$15,000 to include aging-in-place elements.

“Putting the garage floor and the house floor at the same level costs some,” Dorner said. “Making doors three feet wide, that makes your hallways wider, and that makes your house a little bit bigger. Everything kind of compounds. But it isn’t that expensive to have a house that’s handicapped accessible.”

For people who aren’t interested in a full renovation, there are other options. Erickson said his team may refer clients to Neighbor to Neighbor, which provides free, short-term loans of equipment, including elevated toilet seats and bath and shower benches, so people can try before they buy. He also said that the model house at Options for Independent Living in Green Bay is a great place to get ideas for aging-in-place design and technology.

Door County Habitat for Humanity is another organization that can help with aging-in-place renovation. Executive Director Lori Allen said Habitat volunteers build ramps and do minor home renovations as part of the organization’s home-repair program.

After their long renovation process, the Zettels say they’re happy with the look and functionality of their house.

“We feel like our house looks nice,” Cheryl said. “Yes, [the aging-in-place features are] all there, but in our bathroom, it’s not like you’re walking into a hospital bathroom. My mom was up here a couple of weekends ago, and it really, really worked well.”