It’s a big month for the Holiday Music Motel in Sturgeon Bay. In addition to the annual Love on Holiday songwriting sessions and concerts at the Third Avenue Playhouse on Feb. 13 and 14, the hotel is getting statewide and national attention courtesy of two television shows.

The motel was featured in Around the Corner with John McGivern on Wisconsin Public Television on Feb. 5, when McGivern gave viewers a glimpse of Sturgeon Bay and the Holiday. 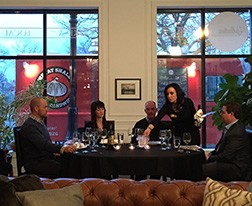 And on Feb. 10, the Holiday Music Motel will be one of four Midwestern hotels competing for a $25,000 prize in a new Travel Channel show called Hotel Showdown.

Of course everyone wants to know, did they win?

“It is really hard to keep a secret. But that’s part of it,” said melaniejane, co-owner and manager of the Holiday Music Motel. “That said, I can’t wait until it’s over because people keep asking stuff. Keeping secrets is not fun.”

When she first received an email from production company Left Field Entertainment (which also does Pawn Stars, Counting Cars and other reality series), she didn’t take it seriously because of a previous experience with a reality TV crew.

“We were actually approached by a reality series a couple years ago. We met them. They came into town and were making fun of locals. Nope, we don’t want any part of this,” melaniejane said. “But this one, I wasn’t really thinking we would participate in it, thinking it was another one of those kinds of things, but I thought I should at least send something back and at least let them know what we’re doing over here.”

“She was telling us about the show, and said it was a positive one without all the fighting and drama. We thought, this sounds like fun. Let’s keep moving forward with the process.” 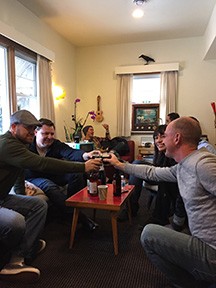 The next step was a casting interview via Skype.

“It was supposed to be 45 minutes and it turned into an hour and a half,” melaniejane said. “We got word that I passed the test. It happened really fast. I got the call during Dark Songs (the annual songwriting and concert series that takes place near Halloween).”

Once informed that Holiday Music Motel was chosen to take part in the show, melaniejane and the Holiday crew got to work on spiffing up the motel.

“Usually we spend the winter detailing rooms,” she said. “Everybody here at the motel was awesome and worked really hard getting ready. That’s how it all began.”

Asked how the Travel Chanel found out about the Holiday Music Motel, this is there official response:  “The production company’s dedicated casting department scoured different regions of the country in search of unique, interesting properties with a variety of styles, themes and personalities to feature on Hotel Showdown.”

The premise of the show is that four hotel owners travel to each others’ properties and rate them. The hotel with the highest rating wins the $25,000 prize.

The others going for the prize in the Feb. 10 episode are The Guesthouse Hotel of Chicago, the Copperstone Inn of Rockton, Ill., and the McCormick House Inn of Hayward, Wis.

“It really was a fun experience. I really enjoyed the guys on the show with me,” melaniejane said. “The crew was just amazing, from the very first day of talking to the production house in New York to the production assistant on the road, everybody was just really, really amazing to work with. I really missed them after. We were traveling in this pod of people for 10 days, all together all the time. The sound guys get really intimate with you. They’re constantly having to thread microphones up and down your shirt and battery packs on your backside. They were all so amazingly professional and a lot of fun.”

At each location, camera crews follow the hoteliers around as they evaluate the location.

“The cameras followed us around all day,” melaniejane said. “They follow you as you walk through the room and you talk about different stuff you see. That’s one of the things you signed up for, to be honest and candid with your critique of the other places. Hopefully they loved everything at the Holiday.” 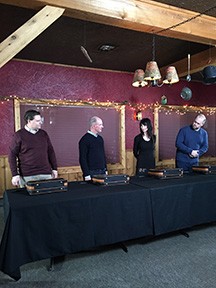 The hoteliers eagerly await to see who will take home the grand prize. Submitted photo

She added that each of the four places held an event that represented the hotel. For example, they went cross-country skiing in Hayward, home of the Birkebeiner. At the Holiday, there was a concert by Purgatory Hill, which is melaniejane and mAcdonald.

“The whole time they don’t tell you where you’re going and they try to mislead you. When we’re all hanging out together, we can’t talk about ourselves, our business or where we’re from. The element of surprise is part of the fun.”

While she is looking forward to seeing how much of what was shot appears on the final show (“They shoot for 10 days and it’s 42 minutes of TV,” she pointed out), she is also somewhat apprehensive of the end product.

“I’m very nervous about everything I said. It’s not just me and pat at the motel. We’re representing a lot of people who are involved here,” she said. “Did I say the right thing to represent us accurately? Did I say anything hurtful about any of the other properties? That’s what’s really got me tied up about this thing because at the end of the 10 days, you really get to know these people. Even though they’re totally different and maybe not people you would normally hang out with, there’s really a genuine love and affection by the time we parted ways. You keep beating your head, ‘Why did I even say anything about that insignificant thing?’”

The Holiday Music Motel episode of Hotel Showdown airs Tuesday, Feb. 10, at 8 pm, and is repeated at 11 pm.