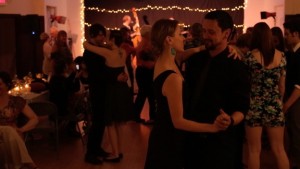 June and Marcus, played by Rebecca Livengood and Justin Pahnturat, dance at their friend’s wedding in the film ‘June Falling Down.’

A crowd in their summer’s best has gathered at the Ephraim Village Hall on a Tuesday evening for a wedding reception. Candles flicker between small bouquets of flowers on white tables, twinkle lights add a warm glow to the room bustling with young and old, and little plates of white wedding cake await takers beside clear glasses of red punch.

Meanwhile assistant director of the upcoming film June Falling Down, Chris Irwin, tests camera equipment while director and star of the film Rebecca Livengood prepares for the shoot.

The couple of five years are making a movie with Door County friends, family, and complete strangers who saw a Facebook post calling for extras.

“Everybody in the movie is so natural, it’s awesome,” says Livengood. “We have the nicest cast and bless their hearts – they are all just doing it to do it. We can’t afford to pay anyone so it’s just volunteer actors. It was really important to me that everyone was just nice and happy and positive.”

The film is a learning experience for Livengood and Irwin, Los Angeles residents who met in Door County. The couple has only filmed a couple of short films prior.

“In the fall of 2012, [Livengood] decided she would like to try and shoot a short film and see if we could do it,” recalls Irwin. They filmed Winter Guest last February, which turned into a 35-mintue short that premiered at the Door County Short Film Festival. 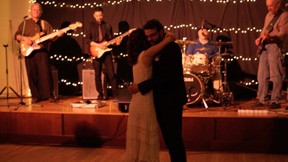 Husband and wife, Harley and Sarah, played by Nick Hoover and Joanna Becker, dance at their wedding reception in the film ‘June Falling Down.’

“We literally put the camera on the tripod, pressed record and then would go get in our places,” laughs Irwin. “That’s where we started and that turned out well. [Livengood] started thinking, ‘Well, maybe we could try something bigger.’”

The script for June Falling Down, written by Livengood, began as a short story she penned while attending college at New York University, where she studied dramatic literature. “It’s kind of sad, my dad passed away five years ago from cancer and that’s what the character is going through in the movie,” explains Livengood. “It was also inspired by my best friend from college, when he got married and that was sad. I was like, ‘He’s growing up…and I’m not.’”

The working title, June Falling Down, is inspired by the Mary Oliver poem, “The Summer Day.” “The part where she says, she knows ‘how to fall down,’” says Livengood. “June is the lead of the movie and she’s learning how to grieve and let herself fall down – instead of running from grief. By coming home and facing her sadness and her grieving family and letting her friend grow up and get married, she’s allowing herself to fall down, so to speak.”

While working on the short story in college Livengood remembers thinking, ‘This would be much better as a movie.’ She started writing the script at her family’s cottage in Baileys Harbor and “just started writing in local places and it was suddenly set here,” she laughs. A few of those iconic Door County places include: AC Tap, Blue Ox, Nelson’s Shopping Center, and Northern Grill.

Though real people and situations inspire the film, Livengood says, “You take real life details and stretch them and make them bigger, so it’s funny how it starts with real life and then you start to falsify it and fictionalize it and make it bigger. It’s funny, I tend to start with a picture of a real life person and then they become someone totally different and they have a different face in my mind.” 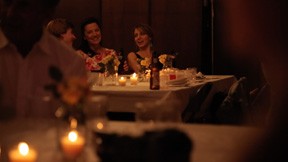 (Left to right) Dave, Kathy, and June – played by Evan Board, Claire Morkin, and Rebecca Livengood – share a moment in the film ‘June Falling Down.’

Many of the Door County actors participating in the film are amateurs, with little or no acting experience at all, including Nick Hoover and Justin Pahnturat.

“They are big parts and finding the right guys was really hard,” admits Livengood. “But I remember talking to both of them at AC Tap at different times and saying, ‘We’re going to make this movie next summer,’ and both of them saying, ‘I’d really like to do that.’” The film also features Claire Morkin, Tony Hodges, Evan Board, Suzi Hass, Edward DiMaio, Joanna Becker, Alan Kopischke, Karin Kopischke, Stewart Dawson, Pat Palmer, Elliot Goettelman, and more.

Before Big Mouth strummed their guitars, before anyone took a bite of cake, Livengood stands on the stage of the Ephraim Village Hall.

“Thank you for coming everyone!” she says, “Just have a good time, act like you would at any other wedding reception – dance if you want, sit down if you want, eat cake if you want. Just don’t look at the camera.”

And that’s what they do, while Irwin and Livengood shuffle throughout the crowd with a camera – two amateurs making a movie with the support of the community surrounding them.

For more information about June Falling Down, which will premier in Door County next summer, visit silverleafproductions.wordpress.com.