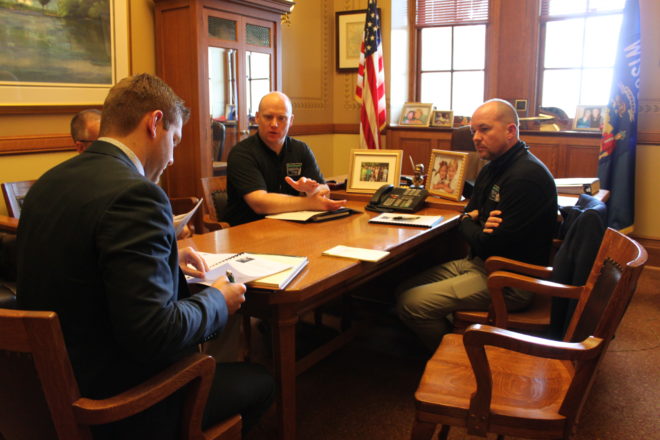 On April 5 and 6, more than 120 public officials, citizens and students rallied at the Capitol in Madison to speak with legislators about both the challenges and opportunities faced by Door and Kewaunee counties.

While some topics such as broadband funding were supportive of measures already taken at the state level, others, including water quality and school start date, were specific to the peninsula, giving legislators from around the state a chance to better understand the northeast corner of Wisconsin.

“One of the reasons we came down in the first place was to make folks in Madison know Door County is not a county paved with gold roads,” said Caleb Frostman, executive director with the Door County Economic Development Corporation, in a meeting with legislators’ staff. “We have problems just like everyone else and it’s not this land of riches.” 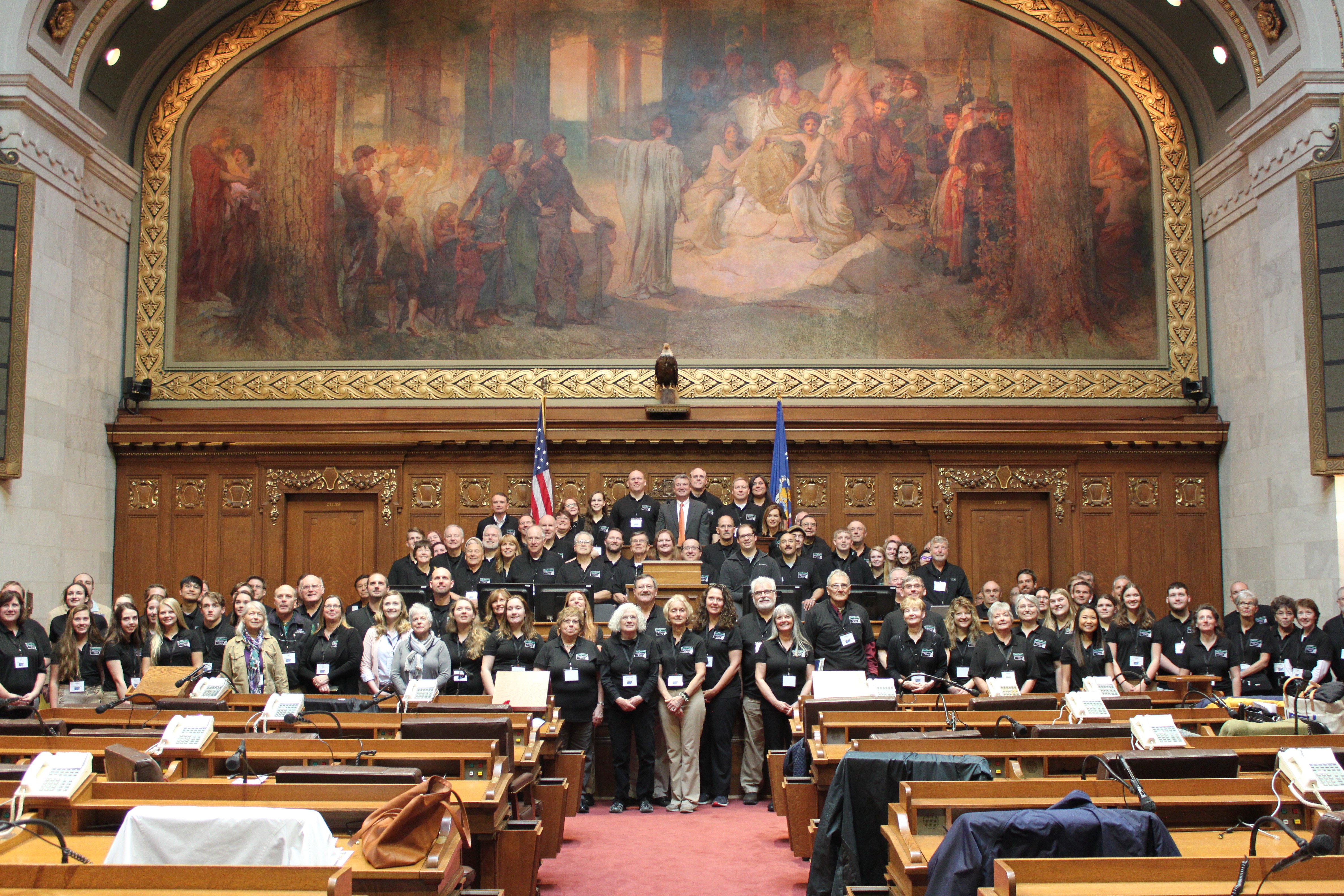 Representative Joel Kitchens and the Door and Kewaunee delegates took a group photo in the Assembly Chamber in the capitol building. Photo by Jackson Parr.

Delegates were well versed in the legislative issues, but also Door County’s ALICE population, an acronym for asset limited, income constrained, employed. The ALICE population, or 21 percent of Door County residents, is above the federal poverty line but still below the basic cost of living in the county, sometimes known as the working poor.

The measures taken up at Legislative Days aimed to support the economic development that can boost the quality of life for the ALICE population while correcting things the working poor struggle to solve on their own, such as water quality.

Two water quality measures made it to the delegate’s legislative agenda: support for the Total Maximum Daily Load (TMDL) study in Kewaunee County rivers and continued support for the rule changes at the Department of Natural Resources (DNR) to address the karst topography on the peninsula.

“We absolutely celebrate our agriculture industry,” said Frostman at the opening of the meeting with Fawcett. Speaker Vos was a proponent of deregulation of high capacity wells in support of the agriculture industry. “We’re just trying to find a way to work together to make sure we’re spreading manure appropriately.”

Calling himself proud to be a conservative Republican, Birmingham said it does make sense to find a solution.

“I imagine it has some similarity to the Central Sands where they have some of those issues as well,” said Fawcett. “Agriculture is in there too so when you go to draw that line you want to make it as finely and as delicately as you can.”

Fawcett said he expects legislation on the matter by the end of the year, though it will probably not be voted on until next year.

During a meeting with state agencies, Kewaunee County Conservationist Davina Bonness explained these rule changes are in the pipeline and being fast tracked through the department.

“Clearly, current regulations are inadequate to protect human health,” said Bonness. “There are some really bad bacteria and viruses we’re finding in these wells and the standards are being implemented.”

Bonness said the DNR is currently formulating a draft rule, with public hearings expected through the summer. The changes will then go to the Natural Resources Board with a final approval from the Governor.

“Hopefully in summer of 2018 we can have this done,” said Bonness.

These rule changes were a major part of Legislative Days in 2015 and delegates called them evidence of success in the lobbying effort.

The TMDL study is a proposal from Rep. Joel Kitchens to quantify the level of acceptable pollution in Kewaunee County rivers, primarily the Ahnapee.

“The first step in improving water quality is determining the pollutants and sediments in the waters,” said Kewaunee County Supervisor Lee Luft to state agency representatives. “Our ask is that the DNR and legislature provide support and funding to conduct appropriate testing to establish TMDL for these important waterways. We ask for the staff and funding to monitor and enforce the standards.”

Luft’s primary argument for the proposal came in the form of a threat to the tourism economy on the peninsula.

“Door and Kewaunee counties combined generate an estimated two million visitors,” said Luft. “When they see beach closure signs, how long do you think they will stay? They go back home and they tell their friends and neighbors that this is what they found. That is why our industry is at risk.”

Fawcett said the TMDL study proposal was not something that had come across his desk yet and both he and Vos would keep an eye out for it. Other legislators were more receptive to the idea after learning federal law requires a study because the rivers are on the Environmental Protection Agency’s list of impaired waterways, while the potential expansion of the study to Sheboygan and Manitowoc counties also received positive feedback. 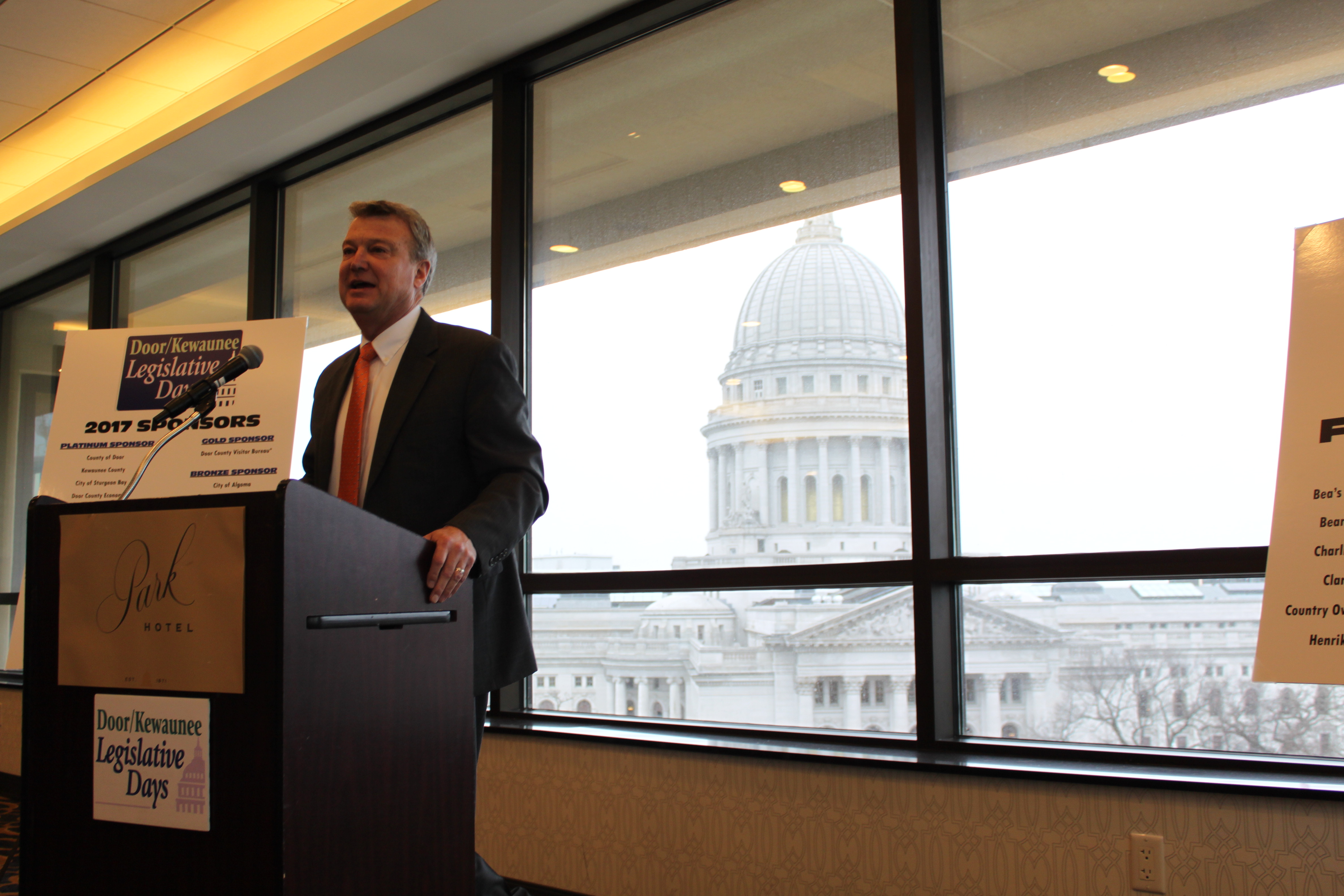 Representative Joel Kitchens addresses the delegates over lunch across the street from the capitol building. Photo by Jackson Parr.

“If these schools start sooner then we’re out of workers,” said Birmingham during the meeting with Fawcett. “When you start taking away the summer, that workforce, believe it or not, they’re important.”

Educators argue an earlier date would better serve extracurricular activities starting in August and provide more school days prior to the AP exams in early May. While there is no evidence supporting the claim that AP test scores will improve with an earlier start date, many support the measure simply for the idea of local control over when schools start.

Delegates were able to dispel Fawcett’s preconceived ideas about the impact on the tourism industry.

“When I first read this I think, well what’s the big deal?” said Fawcett. “So you think if it’s pushed back in August, you would not make up for it in June? I feel like a lot of people take vacations right when school lets out.”

Lake Michigan’s water temperature, occupancy rates and sales tax data show that a week at the end of August is significantly more important to the tourism economy than a week in June. Delegates were able to paint that picture for legislators and make them rethink the implications on the tourism industry.

Senate Bill 96 to repeal the school start date is currently in the Committee on Education. After meeting with legislators, some delegates said the bill is not going anywhere because Senator Luther S. Olson (R-Ripon), chairman of the committee, represents Wisconsin Dells, a tourism economy strongly opposed to the bill.

The morning before delegates arrived in Madison to lobby for increased and sustained funding for broadband, the Senate unanimously passed just that. Senate Bill 49 would provide $11 million in expanded broadband funding through the Public Service Commission and $7.5 million made available for schools seeking better broadband.

If Gov. Walker approves the bill, the state will need to get those grant dollars out the door by the end of the fiscal year on June 30, expediting the grant application and approval process.

Fawcett said most of the funding for broadband expansion is coming from the federal government but the state will look to fill in the gaps.

Perlman said federal funding will likely take longer to see the impact while state funding can be moved to local providers more quickly, urging the state to continue its own investment in the infrastructure.

Legislators expect the broadband expansion bill will be signed in May. 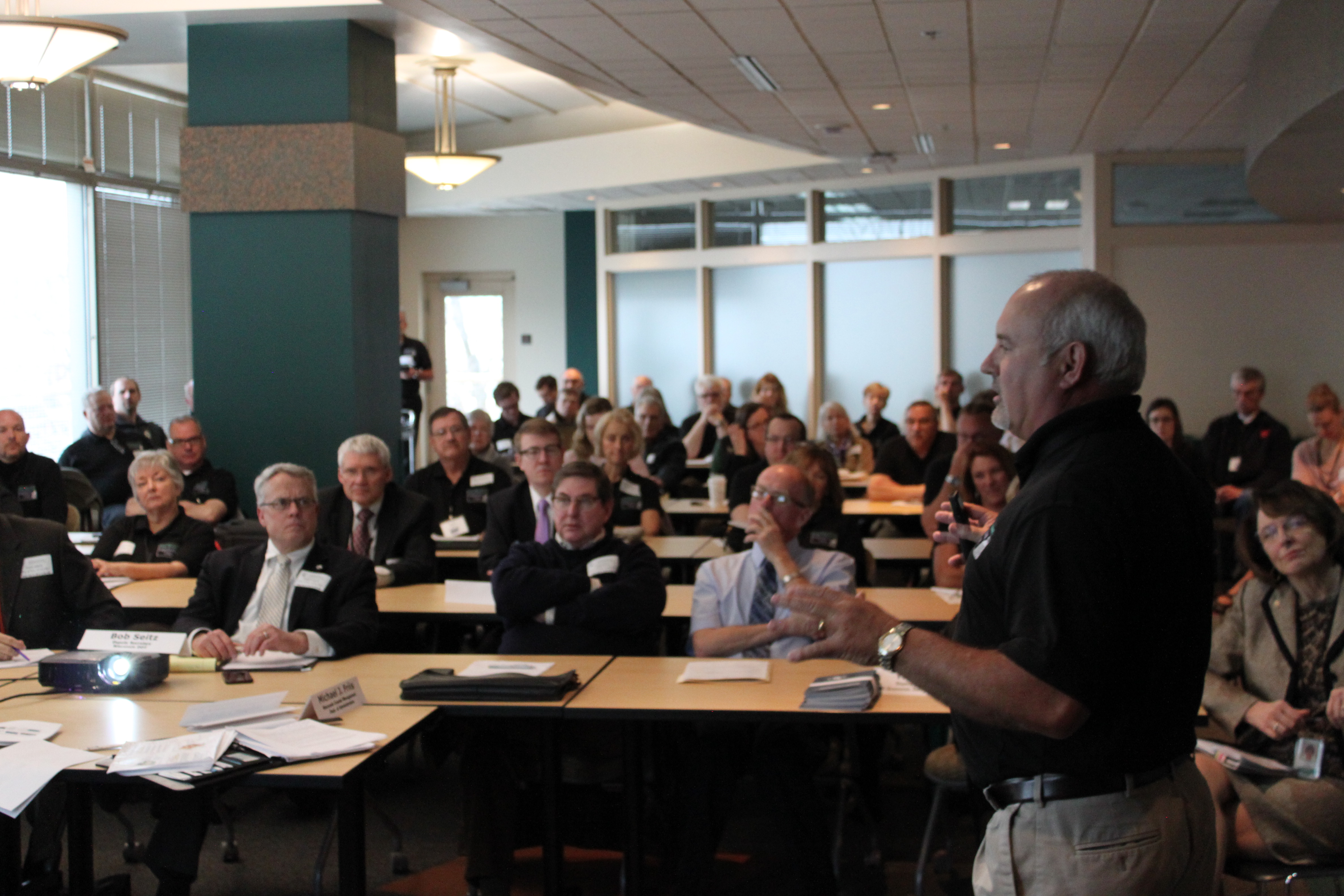 Todd Thayse, Vice President and General Manager for Bay Shipbuilding, speaks about the importance of the Harbor Assistance Program before a panel of state agency administrators. Photo by Jackson Parr

After facing the chopping block in Gov. Walker’s original 2015 budget proposal, the state restored the Department of Transportation’s Harbor Assistance Program (HAP), which included $4.2 million to repair the Kewaunee seawall.

Bay Shipbuilding was the primary lobbyist for the HAP grants at Legislative Days.

“We have to find a way to employ strategies to build indoors,” said Todd Thayse, vice president and general manager at Bay Ship. “This whole process was made possible by that HAP money. It helped us be much more competitive because we can build it inside. But we have more work left.”

After receiving HAP grants to build a dock wall and a floating dry dock, Bay Ship did not receive funds in the most recent cycle for construction of additional berths at the campus.

In meetings with legislators, Hoernke explained the strong business forecast for Bay Ship and the company’s ability to increase staff, payroll and working hours at the facility thanks to previous HAP funding.

Birmingham also noted Bay Ship’s parent company, Fincantieri, for their $40 million investment in the facility since acquiring it in 2008. He said the company has shown its commitment to Sturgeon Bay and Wisconsin, and the state needs to show their commitment as well.

The Value of Legislative Days

It can be easy for delegates to get discouraged in the Capitol building. Many of them don’t get to meet with a single legislator, speaking only to their staff and interns instead while hoping the game of telephone will result in statewide changes. Other measures seem to be given the green light before delegates even show up.

But during lunch on April 5, Kitchens reminded the delegates of their success while asking for their confidence to continue.

“I don’t like to say this in front of my colleagues, but we have done very well in terms of state funding and attention to the needs of our area,” said Kitchens. “Two years ago, of the seven issues on the agenda, every single one of them either has been accomplished or is in the process of being accomplished right now.”

Kitchens said the state is in pretty good shape right now. Revenues are up, expenses are down, and Wisconsin has the unique problem of too many available jobs with not enough people to fill them.

“The budget this year is not really as tight as two years ago,” said Kitchens. “Everybody has 100 different things they want to spend money on but it’s a more favorable budget.”

While some of the issues on the Legislative Days agenda are already being implemented, they still need an extra kick across the finish line by delegates in Madison. Others are ongoing battles between different interests in the state and there are a few issues unique to the peninsula, keeping Door and Kewaunee counties a special place worthy of Madison’s attention.