When Debbie (Anderson) Kordon was growing up in Baileys Harbor there weren’t any girls’ youth basketball leagues or pickup games, but that was okay – she just played with the boys.

“Dennis Krishka would do a lot of open gyms for the guys,” Kordon recalled, talking about the former Gibraltar High School boys’ basketball coach and athletic director. “So I would just go there with my brothers and nobody ever said I couldn’t play.” 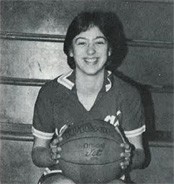 Debbie Kordon back in her playing days at Gibraltar High School.

She played there and on the courts of Baileys Harbor, where she grew up with her sports-addict brothers Tom and John just a few steps from the schoolyard. That early competition helped Kordon develop the skills that would make her the first 1,000-point scorer in Door County girls’ basketball history when she graduated in 1982.

Thirty years after her playing days ended her alma mater will honor her with a special ceremony Feb. 24, raising a banner recognizing her school-record 1,048 career points.

Point number 1,000 didn’t come easy. Gibraltar was matched up against an always-tough Algoma team, and Kordon needed 15 points to hit the magic mark. Toward the end of the game she was getting close, and when she finally notched the bucket to reach the milestone, Algoma Coach Bob Haffman called timeout.

“He seemed bigger than life to me then,” Kordon said. “He called timeout, walked over to me, and gave me the ball. ‘I knew you were going to get it,’ he told me, ‘but we weren’t going to make it easy.’ That was pretty awesome.”

Going into the season there was little talk of the milestone, so when Kordon missed nearly five full games early in the season due to injury she didn’t think much of it. Only years later when she returned to the county and remained the only member of Gibraltar’s 1,000-point Club did she realize the significance of it.

“I would have thought others would have done it,” she said. “It’s a little overwhelming to get this recognition now, but I hope that other young girls see it and think ‘Hey, I want to do that.’ I look forward to having lots of company. I want them to aim for it.”

More than a scorer

“She had such great defensive anticipation,” he recalled.

That anticipation resulted in lots of stolen passes on the wing, which she would use her track-star speed to turn into fast-break lay-ups on the other end. Those, however, didn’t come naturally.

That form shooting work honed her best weapon, a deadly mid-range jump shot that she could nail off of screens or off the bounce. She could get to the bucket too, but ball-handling skills weren’t emphasized in the girls’ game back then. Girls’ high school sports weren’t offered on a scale with boys’ programs until the 1970s, and when Kordon entered high school the girls were still playing with a bigger guys’ ball that made ball-handling difficult.

“It was definitely a much slower game than it is now,” she said. “And we played some big teams like Algoma, which won state in 1981, and Luxemburg-Casco, so you didn’t drive on them.”

Kordon was a star from the start. As a freshman she played one quarter of JV basketball. She played varsity the next game and led the team in scoring, establishing herself as a varsity starter for the rest of her career.

In her junior year she was surrounded by a handful of quality players including Julie and Connie Fitzgerald, Tammy and Julie Honold, Robin Olson, and Deb Merkle, who her coach said was crucial to her scoring development.

“Deb [Merkle] allowed [Debbie Kordon] to move off the ball to the shooting guard spot,” Honold said. “That really freed her up.”

“We had a really strong team,” Kordon said. “It’s easy to have success when you’re surrounded by all these great players.”

But Honold said Kordon wasn’t defined in his mind by her scoring.

“The difference between good and great is what you do to make your team better, and she took a team that had won just a couple of games for three years and they won more than 30 in her final three years,” Honold said.

Debbie Kordon grew up playing with a guys’ ball, playing the boys’ game, but when her career was over she had established a new identity for women’s athletics.

“She was,” Honold recalled of those early days of girls’ high school sports, “what people hoped female athletes could be.”