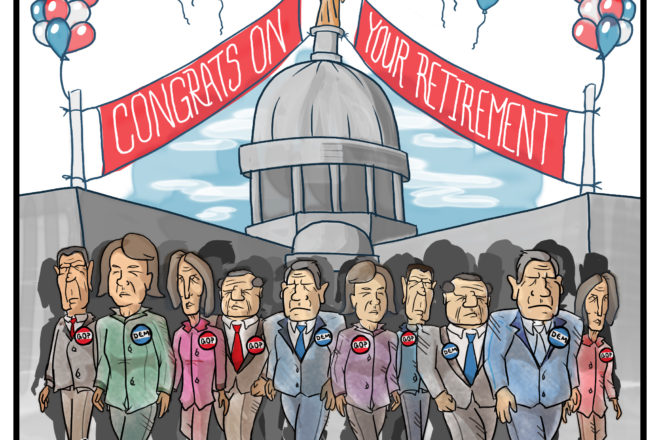 More than a quarter of incumbents not running for their seats in 2022, a rate not seen since World War II

by HOWARD HARDEE, for The Badger Project

Count on it: When Wisconsin’s political districts get redrawn, an unusual number of state lawmakers head for the door.

This election cycle is no exception. Following the Wisconsin Supreme Court’s decision in April to accept legislative maps drawn by Republican lawmakers, members of the state Senate and Assembly are retiring or seeking another office at the highest level since World War II.

At least 31 legislators have either filed noncandidacy paperwork with the Wisconsin Election Commission or did not submit paperwork to run again: 24 state Assembly members and seven state senators. That’s the highest percentage since Franklin D. Roosevelt was president.

In 1942, 32 lawmakers didn’t run for reelection, according to statistics from the Legislative Reference Bureau.

In 1954, the first election under a new redistricting plan, 31 legislators also did not try to hold their seats, but the legislature was slightly larger then, with 100 seats in the Assembly instead of the 99 now.

In 2014, 30 state lawmakers chose not to seek re-election, following the Republican-led legislature’s hyperpartisan redrawing of district maps in 2011 and the resolution of court challenges that affirmed them.

“At one time, there was great turnover in the legislatures and (then) there was a big movement to make being a legislator more of a career,” said Ed Miller, a retired political science professor with the University of Wisconsin-Stevens Point. “And that’s what happened — the legislature became much more stable over the years.”

But one pattern of lawmakers leaving has held in the modern era. “Generally, the greatest turnover has occurred at those sessions following redistricting,” reads a 2007 brief from the Legislative Reference Bureau.

Door County’s legislators – state Rep. Joel Kitchens (R-Sturgeon Bay) and state Sen. Andre Jacque (R-DePere) – are both running for reelection. Of the outgoing legislators, 14 are Democrats and 17 are Republicans. Among them is Assembly Majority Leader Jim Steineke (R-Kaukauna), the 2nd-ranking legislator in the Assembly behind the Speaker, who is retiring after 10 years in the legislature to pursue work in the private sector.

Wisconsin state legislators receive an annual salary of $55,141 per year, plus per diem payments up to $153 per day.

In a case likely influenced by redistricting, state Sen. Dale Kooyenga (R-Brookfield) is stepping down after a single term representing the 5th State Senate District, citing in his April announcement the “politically tumultuous events of the past couple of months.”

In response to Democratic Gov. Tony Evers’ proposed district boundaries, which would have drawn him out of his district and into fellow Republican state Sen. Alberta Darling’s, Kooyenga took to social media to protest “quite possibly the most personal, creative, partisan and cynical gerrymander in Wisconsin history.” He later announced he would retire.

First, the Wisconsin Supreme Court accepted the governor’s legislative maps, which would have forced Kooyenga to run against another Republican incumbent to keep his seat. But when a right-wing challenge at the U.S. Supreme Court resulted in the maps being sent back down for reconsideration, the state Supreme Court reversed its decision and chose the Republican-drawn maps instead. Kooyenga then changed course, saying he would run for re-election, before finally deciding to retire a second time.

Despite the new maps appearing to give Republicans the advantage in the 5th State Senate District, some areas have been trending from “dark red” to “lighter red” and “pink” in recent elections, said Ryan Weichelt, a professor of geography with the University of Wisconsin-Eau Claire.

“You can think of the Democratic support growing from the east and slowly moving westward from Milwaukee,” he said. “Wauwatosa is Democratic, and when you move towards the Village of Elm Grove and Brookfield, it starts changing Republican. While still red, it’s slowly trending towards Democrats in some areas.

“This is troublesome for the GOP for statewide elections because its success is dependent on large turnout of rural votes and additional support in the suburban areas,” Weichelt continued. “Though they’re not going blue, the loss of a few thousand votes is difficult to overcome, especially if voter turnout remains so high in Dane County.”

Kooyenga’s office did not respond to The Badger Project’s requests for comment.

Wisconsin’s once-famous moderate and civil politics has long since corroded into nasty hyperpartisanship. The legislature has become a hostile work environment, which could make the private sector more appealing to some lawmakers, Miller said.

“There’s great conflict within the legislature,” he said. “In other words, it’s not fun anymore.”

For Republican incumbents, there’s also pressure from the national GOP to be sufficiently in favor of former President Donald Trump, Miller said, and a greater expectation to fall in line with party leadership under threat of a primary election challenge.

“They’re actually calling members of the state legislature and threatening to run people against them,” Miller said. “They didn’t use to do that. If you don’t follow the leader of the party, then you’re in trouble — particularly in terms of financing.”

There is some loss of institutional knowledge when so many lawmakers leave at once, Miller said, and there are benefits to stability in a political body.

There is a steep learning curve for freshman lawmakers, particularly regarding balancing the budget, said Senate Minority Leader Janet Bewley, 70, who is among the highest-profile Democrats to retire. However, she noted the legislature is supported by a strong staff of non-elected and nonpartisan employees.

“When you’re elected and you come in as a freshman, if you’re thoughtful you’ll acknowledge that there’s a lot you have to learn and you’ll seek out people that can be trusted to give you good information,” she said. “It depends on the personal integrity of the person coming into office.”

Bewley said that having a front-row seat to the rancor, discord and noncooperation that have come to define state politics over the past 12 years did not play into her decision to retire.

“If I were to run again, that would be another four years and I would be in my mid-70s,” she said. “My husband and I decided that it just makes sense for someone of my age [to retire].”

Bewley was elected to the State Assembly in 2010, serving a couple of two-year terms. Starting in 2014, she then served two four-year terms in the state Senate. She still has faith in compromise and democracy, but admits that the political climate in Wisconsin is an issue.

“Gradually, it’s getting worse,” she said. “The unwillingness to cooperate is more severe than when I first started.”

This article is reprinted in the Peninsula Pulse with permission from The Badger Project, a nonpartisan, citizen-supported journalism nonprofit in Wisconsin.