Jan. 1, 1963 was a red-letter, or I should say a red-bellied, day for me. It was then that I saw my first Red-bellied Woodpecker in the state, in Kewaunee, my hometown. Statewide birders’ sightings of these flashy vociferous birds indicated they were gradually expanding their more southern range northward.

On Dec. 27, 1963 Harold Wilson, while doing our northern Door County Christmas bird count, saw one at his window feeder in Ephraim. This sighting was also a Wisconsin first for Harold, veteran birdwatcher and bander. I helped friends in Wautoma on their Christmas bird count on Dec. 30, 1966, and on that memorable day we saw 21 Red-bellies. 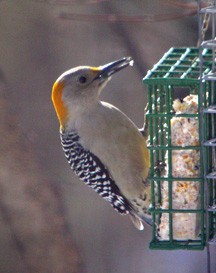 An unusual yellow-colored female Red-bellied Woodpecker showed up at our suet feeder on February 16, 2005.

I’ll never forget the first Red-bellied Woodpecker I ever banded, which was near Loganville, Wis., on property owned by the Wisconsin Society for Ornithology. Unfortunately that bird became “tongue-hung,” as we banders described their predicament. One of the fine nylon strands of the net became entangled near the back of the bird’s tongue, and all the while I worked to untangle the bird’s tongue it screamed bloody-murder at the top of its voice.

Just about the time I had completed the nerve-wracking task with this bird it began pecking vigorously on the back of my hand. Ouch! Did my poor hand ever get bloodied up within a matter of only a few seconds. It was then and there that I came to realize what tremendous power those and other woodpeckers have with their sharply pointed beaks.

More and more people who feed birds in Door County now are regularly reporting these showy and noisy creatures that soon let their presence be known. This strikingly marked woodpecker, which has zebra-like black-and-white barring on the back, light tan underparts and throat, and a flaming patch of neon red on its crown (more on the male than on the female) has become a favorite.

A common question from those who see their first Red-bellied Woodpecker is, “Where is its red belly?”

Good question! There are times when the red on this bird’s belly simply cannot be seen.

You have to view the bird through binoculars from the side in good light in order to see a very light red or pinkish “wash” on its lower belly as well as on its face, more on some birds than on others. Usually the red is also more intense during the breeding season in spring.

The first Red-belly we saw at our new home in the woods southeast of Egg Harbor was an immature male on Aug. 10, 1983. Now they nest in our woods or in neighboring woods every year. What fun it is to watch the parents bring their babies to our front yard for the first time, to introduce them to the various feeders and the steady supply of good nutritional food. 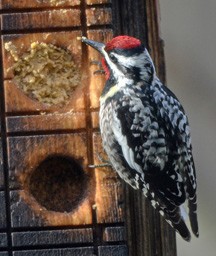 I have been asked how old these birds might be, and if the same ones return to feeders year after year. A banded Red-belly in Hillsboro, S.C., was recaptured 20 years and eight months later and then released, still an outwardly healthy bird. This bird, at the time, had attained the greatest known age of any wild American woodpecker.

We, along with many others, are so glad that Red-bellies are expanding their range northward, much like the Northern Cardinal, Carolina Wren and Mockingbird. There is also a well-established breeding population of them in various parts of southern Ontario.

Approximately one-quarter of this woodpecker’s food consists of insects, including ants, grasshoppers and especially the larvae of wood-boring beetles. The remaining three-quarters of its diet is vegetable and can include corn (they especially like our cracked corn year round), beechnuts, acorns, strawberries, blueberries, elderberries, grapes, blackberries, apples, cherries and oranges in the South.

Marvel meal (mixture of peanut butter, lard, rolled oats, etc.) has become one of the favorite foods of our Red-bellied Woodpeckers. Our Pileated Woodpeckers also ravenously consume this delicacy.

In spring when the Baltimore Orioles arrive we put out orange halves and also place a spoonful of grape jelly into some of the hollowed-out halves. The Red-bellies partake in both of these handouts as well. 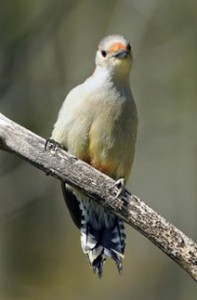 The Red-bellied Woodpecker is lumped together with two other similar “zebra-backed” woodpeckers, the Gila (HE-la) of the Saguaro deserts and the cottonwood groves of the Southwest, and the Golden-fronted of the mesquite forests, oaks, pecan groves and river bottoms having big trees in central Texas.

The males of both the Gila and Golden-fronted Woodpeckers have small red “top notches” while the female lack red entirely on their heads.

The Red-bellies’ red on its head extends clear to the top of the beak while the red on the female’s crown extends only to about the middle of the top of her head.

Another less common woodpecker is the Yellow-bellied Sapsucker. It nests in our county but rarely comes to feeders. It is frequently seen during spring migration as it enjoys the sap that drips from the Sugar Maple trees. They do not stay in Door County all year like the Red-bellied, Downy, Hairy and Pileated Woodpeckers.

To date we have seen only about half of the 20 or so species of woodpeckers native to North America. Without question we are thrilled day after day at the arrival of one or more Pileated Woodpeckers at our front-yard feeders.

But for overall enjoyment throughout the year, for their trusting tolerance of humans, their noisy but welcome chatter, their crisp clean color combination, we like the Red-belly best of all, regardless of whether it has a red belly.