We’ve recently had one of our very favorite bird species visiting the marvel meal feeder just about every day, a Red-headed Woodpecker. It began appearing at the feeder about May 15, and we can only hope that eventually there will be a pair and that they will nest in our lower woods. 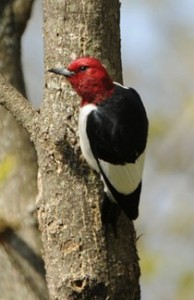 A Red-head checks for predators before coming in to the suet feeder.

Its black, white and red feathers are strikingly and boldly arranged, much like a flag. The fact that its secondary flight feathers, those wing feathers closest to its body, along with its upper tail coverts and rump are white, giving the bird a spectacularly flashy flight. I like to think that it wears its tuxedo all the time, complete with the red decorations.

Generally, as indicated in past years, they prefer the lower northern part of our woods where the tallest and oldest trees grow. There too exist several large, standing dead trees which offer them excellent caching sites, particularly for Beech nuts and acorns. Hopefully these same trees will provide them with nesting sites this summer, for the Redheads tend to prefer dead trees in which to excavate their nesting cavities.

One of the trees Charlotte and I chose to let live close to the southwest corner of our house is a fairly large Sugar Maple tree. In summer and fall it shades the house from the afternoon sun while in winter, with its leaves gone, the sun’s rays can freely pass through its skeletal crown and help to heat our home. 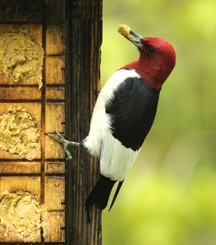 A Red-head checks for predators before coming in to the suet feeder.

We were so thrilled a few years ago when one of the immature (hatched the previous year) Redheads chose a favorite niche on the maple’s trunk easily seen at eye level from our second floor living room. There, about 16 feet above the ground, the bird wedged either chunks of beef suet, kernels of corn, Marvel Meal or sunflower seeds and methodically proceeded to eat them, allowing us to observe and to take photographs from close range.

The black bars showed clearly on the immature bird’s white secondary flight feathers. On some birds these white feathers are crossed by one black bar, on others by two. Gradually these feathers will grow and also slowly wear away on the edges. By late spring the bird’s head will be completely red, the secondaries all white, and the back feathers will be all black, their gray edges also having worn away.

Quite commonly you will see Red-headed Woodpeckers well away from wooded areas throughout their range, which extends westward all the way to the Rocky Mountains. These noisy active birds are not forest dwellers but creatures of the small woodlots, fence rows and edges of woods. In fact their love of insects, such as beetles, grasshoppers and crickets, frequently lures them to roadsides and ditches.

All too often this leads to bird-car collisions as the bird perches on a fence post, then takes off in its rather slow deliberate style of flight and flies low across the road to another fence post. It may seem foolhardy of me to ask drivers to slow down when they see Red-headed Woodpeckers along the roadside, but there’s no harm in trying!

These conspicuous, defensive, expedient birds have their favorite foods. Of the half of their food being made up of various insects, they tend to favor Carabid Beetles, such as the Common Black Ground Beetle. Ants also make up about a tenth of their total food intake. Various plant parts comprise the remainder of their annual food, with corn ranking very high on their list of favorites. Beech nuts are perhaps their most choice food in fall and winter in our region. I dread the prediction that the White Bark Beech disease will do away with all of our American Beech trees within the next several years! What an additional low blow this will be to the Redheads.

Two parts of this woodpecker’s anatomy show clearly through a scope or in close-up photographs, its formidable beak and its feet. Birds in general have four toes. Unlike the majority of birds’ feet in which three toes face forward and one backward, the foot of most woodpeckers, including the Red-head, are zygodactyl with two toes facing forward and two backward. This provides them with greatly improved ability to cling to rough tree bark.

What a long, pointed and powerful beak the Red-head has, perfectly suited for probing for ants and other insects and also for chiseling out a nesting cavity. Both its skull and bill are very strong, yet, quite lightweight. You can easily imagine the punishment the tip of its bill receives with repeated hammering blows into the ground or especially hard wood. Fortunately special cells quickly renew the growth of the injured part of the beak’s tip.

This is a feisty bird very capable of defending itself and vigorously chasing European Starlings out of its nesting territory. During the winter season when the Redheads have migrated to the south, the European Starlings make themselves at home in the wooded areas. Come spring, as soon as the Red-headed Woodpeckers return to “their” woods, they don’t waste any time in firmly chasing every one of the nest-cavity-robbing Starlings away. 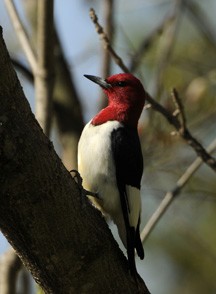 The Red-head’s beak is a powerful tool for excavating nest cavities.

We admire the boldness and spunk of the Red-head, definitely at the top of the (wood) pecking order of those species in our yard, amazingly including the Pileated Woodpecker who keeps its distance. Even though the Hairy Woodpecker is the same size, this bird is no match for the more aggressive and bossy “Red.”

Fierce competition for nest cavities in old trees from the European Starlings, along with people tidying up their fence line trees and their woodlots far too much have dealt crippling blows to the wonderful but gradually disappearing Red-headed Woodpeckers. Too many people tailor-make their properties to their needs and wishes while expecting the birds and other wildlife to “toe the mark” according to human standards.

It’s time we assess all forms of native wildlife and their needs, including clean water and air, and abide according to their standards. This means giving in to the woodpeckers by allowing plenty of dead trees to remain standing in your woods and along the fencerows. Let your red, white and black patriotism shine through!