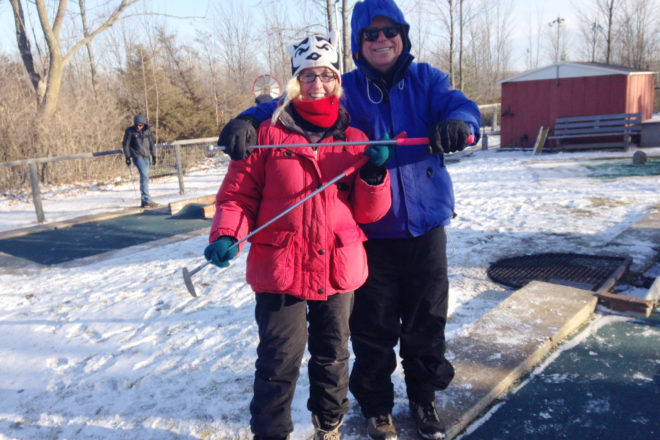 Through the Windmill director Amanda Kulkoski plays the Frostbite Open with her father, Bill Kulkoski, at the Red Putter Mini Golf in Ephraim during filming of her feature-length documentary on mini golf courses in the United States. Submitted.

What started as a small event in Base Camp Coffee Bar almost a decade ago has ballooned into a village hall event in Sister Bay and a staple of the Door County arts world. On Feb. 16 and 17, the Door County Short Film Fest will screen selected shorts for viewers, along with an opening night feature-length film Through the Windmill, a documentary about American mini golf courses.

Chris Opper, organizer of the event, opens up submissions for the festival as soon as the last one finishes. Using the hosting site FilmFreeway, Opper spends the year watching one- to 20-minute submissions from around the world and then carefully curates the event (preference, of course, is given to Wisconsin-based filmmakers).

For the second year in a row, the fest opens with a feature-length film. This year, the festival will commence with the work of Green Bay native Amanda Kulkoski, a film studies professor at Savannah College of Art and Design.

Her film, Through the Windmill (2016), spotlights mom-and-pop mini golf courses around the country, including the Red Putter in Ephraim. The film features the late Bob Yttri, beloved former owner of the course, who also happens to be Chris Opper’s father-in-law. Opper knew he had to screen this film, especially in front of a community that loves its mini golf.

“With the festival, we’re always trying to find stuff that will be entertaining,” Opper said. “That’s the baseline for whether or not I accept a film. Knowing Amanda, seeing the film, the fact that the Red Putter is showcased, it all just came together.”

Kulkoski spent four years making Through the Windmill, taking 20 separate trips to various courses, and traveling to more than 25 states. By the end of her travels, Kulkoski ended up with a crew of more than 60 people.

“One of the great things about being a film professor is that I have friends that work in film throughout the country,” Kulkoski said. “Many of them met me at one of the courses and helped as crew for the day.”

It should come as no surprise that the filmmaker behind the first feature-length documentary on mini golf courses is a mini golf lover herself.

“My first job was at Fort Fun in Green Bay,” Kulkoski said. “I was just one of those kids who really loved to play all the time, so it made sense that my first job would be at a mini golf course.” 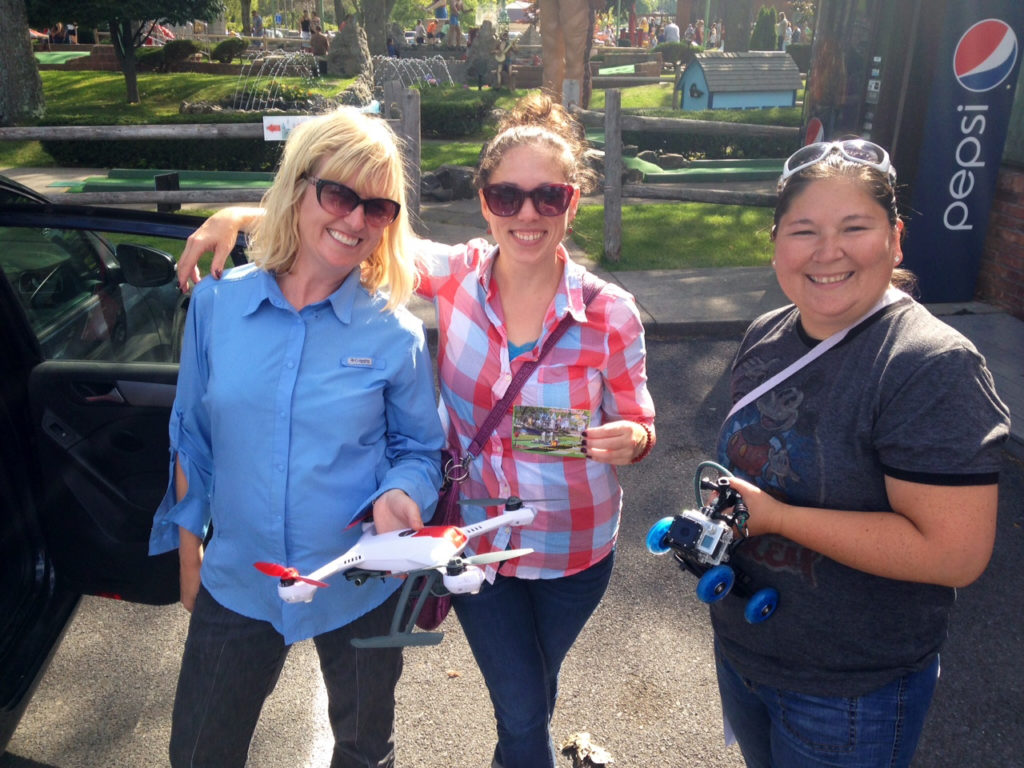 Her love was rekindled while at film school in Savannah when she frequented a cheap course with friends. Kulkoski knew then that she wanted to make a film about the leisure activity.

More than 10 years later, a friend recommended talking to a woman in Connecticut who had quit her job to open her own mini golf course. Kulkoski had her main subject for the film. She took the opportunity and ran with it. Four years later, she had a feature-length film.

“Documentary is all about discovery,” Kulkoski said of her experience.

While filming, she discovered a burgeoning art movement around mini golf and Kulkoski herself now plans to open a homemade course in Savannah with the help of some friends.

In recent years, Opper has amped up the entertainment value of the event. Along with free popcorn, there will be pizza sold from Wild Tomato and sliders from McEvoy’s Culinaria. Beer and wine from Al Johnson’s and hard cider from Island Orchard Cider will also be sold. Admission for the entire weekend event is $5.

As the short film fest continues to flourish, Opper has plans to expand its presence in the community. There will be a screening this spring at The Clearing of the “best of” films from the upcoming festival, and the Love On Holiday event last weekend used a 2018 short film fest selection as inspiration for some of its songwriters. Last summer, Opper teamed up with Isadoora Theater and put together a 48-hour filmmaking challenge, and he hopes to do it again this year.

“That’s the kind of thing that we’re interested in,” Opper said. “That’s who we are. We’re trying to make this more organic than just your typical film festival.”

Doors open on Friday at 6pm and films begin at 7pm. For more information, visit cometosisterbay.com or find the film fest on Facebook. Find more information on Amanda Kulkoski’s movie at minigolfmovie.com.