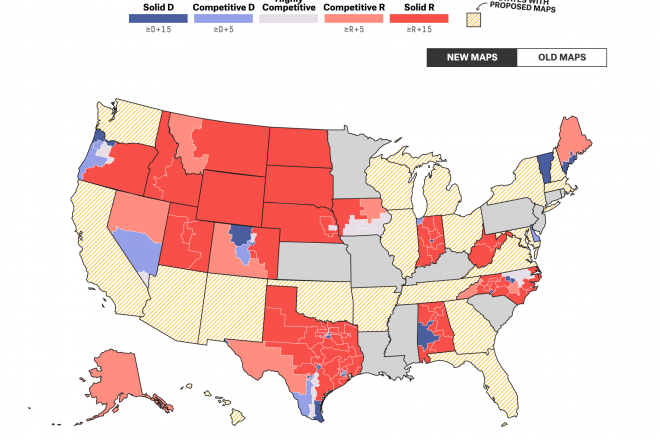 Last week, Gov. Tony Evers vetoed the redistricting maps previously passed by the Wisconsin Assembly and Senate. It’s now up to the courts to shape the congressional and legislative districts that will be in place for the next decade.

The GOP redistricting plans for the state legislature and Congress both passed on 60-38 party-line votes, with all Republicans in favor and all Democrats opposed. The governor promised to veto Senate Bills 621 and 622 if the Republican-controlled legislature did not go back to the drawing board, which it did not do.

“I promised I’d never sign gerrymandered maps that came to my desk, and I’m delivering on that promise today,” Evers said in a Nov. 18 veto video message.

If the veto was no surprise, the vote was unexpected for the other set of maps developed by the People’s Maps Commission – an entity Evers created by executive order. The Assembly rejected the People’s Maps proposal, 77-21, with 17 Democrats joining 60 Republicans to oppose the plan.

The Democrats who sided with Republicans against the commission’s maps said the proposed districts diluted the voting power of minority voters to create more Democratic seats and violated the Voting Rights Act.

Rep. Joel Kitchens (R-Sturgeon Bay) said he would support a different way of drawing the maps, but he hasn’t seen such an alternative and didn’t have another option when he cast his vote with his party for the legislature’s maps Nov. 11.

“I would support a truly nonpartisan map,” he said. “That didn’t happen. I have to vote for the best option there, and that was the best option available. People think I’m being hypocritical. I’m just going with what my options are.”

“I shouldn’t have one township in a county, so my district is better,” Kitchens said.

Under the People’s Maps Commission drawings, Assembly District 1 would have had more townships in Manitowoc County and none in Brown County.

The current maps were drawn following the 2010 Census by the Republican-controlled legislature and approved by a Republican governor. Advocates for a different, bipartisan method for drawing maps point to the 2018 Assembly election to prove the maps are gerrymandered and unfair: Democrats received more votes than Republicans – 53% versus 45% – yet received only 36 seats in the Assembly versus the Republicans’ 63 seats.

The apparent imparity has caused 55 counties to pass resolutions, and 32 counties to pass referendums, asking for reform. Door County is among those. Still, Kitchens said votes don’t transfer to an equal distribution of seats given Wisconsin’s political geography. With Democrats highly concentrated in Dane and Milwaukee counties, and Republicans widely dispersed throughout the rest of the state, it’s difficult to make Democrats competitive in an equal number of seats to Republicans.

“No matter who draws the map, it is going to favor Republicans,” Kitchens said.

Wisconsin’s political geography does naturally favor the GOP, “but not by as much as either the current map or the Republican leaders’ map,” said John D. Johnson, a research fellow in the Lubar Center for Public Policy Research and Civic Education at Marquette Law School, in an analysis and comparison of the GOP’s maps and the commission’s maps.

Political geography notwithstanding, 73.6% of Door County voters approved an advisory referendum asking for a nonpartisan process to shape political boundaries. Kitchens said he hears only from Democrats about the current redistricting process and thinks too much weight is placed on the maps.

“This oversimplifies it that people always vote for one party,” he said. “We act as though everybody is always Republican or always Democrat. If you have a strong Democratic candidate, they can certainly win.”