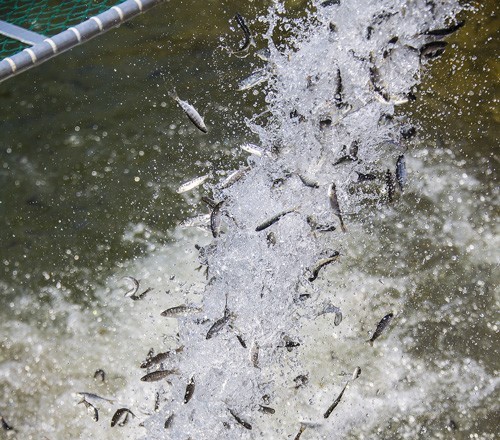 Chinook fingerlings travel from the back of a tanker truck through a hose and into the 41 degree Lake Michigan in 2014. Photo by Len Villano.

A 62 percent reduction in Chinook salmon stocking numbers for 2017 has been recommended by the Lake Michigan Committee of the Great Lakes Fisheries Commission.

In an online media briefing held the morning of June 13, two members of the Wisconsin Department of Natural Resources fisheries team – Todd Kalish and Brad Eggold – discussed how the decision was arrived at, and how the DNR will gather stakeholder comments through July 30 before making any stocking policy changes.

The two DNR officials said the main driver for the recommendation is the predator-prey relationship – specifically a declining alewife population, which is the major source of food for Chinook salmon.

“The alewife population is at a historic low and continually decreasing,” Kalish said, “telling us there are too many predators out there for available prey.”

Invasive mussels have contributed to diminishing the amount of food available for alewives. Given the massive numbers of quagga mussels in Lake Michigan, prey fish are not expected to rebound any time soon to numbers that would support current stocking levels.

Kalish said if the agencies are wrong and there is ample forage fish, the reduced stocking should not harm the fishery, but if nothing is done and the predator-prey imbalance that data suggests is there, Kalish said there is risk of a collapsed trout and salmon fishery as was experienced in Lake Huron.

In March, the University of Michigan released a study on the collapse of Lake Huron’s Chinook fishery in 2003, saying it was due to the collapse of the alewife population.

Researchers are still seeking answers about why the alewife population declined by 90 percent in Lake Huron between 2002-03.

The report concluded that Lake Huron’s Chinook fishery is gone for good because the lake will no longer support alewife. The report also found “that if current trends continue, Lake Michigan will likely experience an alewife collapse similar to Lake Huron’s, followed by the crash of its Chinook salmon fishery.”

Pacific salmon – Chinook and Coho – were introduced into the Great Lakes 50 years ago to establish a new recreational fishery and to help control alewives, a non-native species that entered the lakes in the late 1940s. Chinook salmon and lake trout are staples of a Great Lakes fishery valued at more than $4 billion annually.

Eggold said three stakeholder meetings will be held to discuss the Chinook reduction. All meetings will run from 6 to 8 pm. The first will be held at Lakeshore Technical College in Cleveland, Wis., on June 27. The second meeting will be held June 29 at the Brown County Library in Green Bay, and the final meeting will be at the UW-Milwaukee School of Freshwater Sciences. They are also taking comments through [email protected] through July 30.