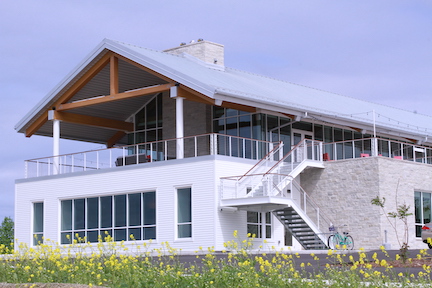 The Kress Pavilion in Egg Harbor has become a popular location for weddings, public meetings, conferences and classes since it opened in 2018. Submitted photo.

And parking solutions stalled in the Village of Egg Harbor

When the village embarked on plans to build the Kress Pavilion, detractors said the combination library, community center and meeting space would not be able to pay for itself. Just two years after the pavilion opened, the village has its answer.

The village is considering placing a referendum on the ballot that would provide more than $100,000 annually to support operations at the Kress.

When the facility was built, the village anticipated operating at a loss for the first three years, but it hoped the facility would be revenue neutral after that by scheduling weddings, conferences and other events. The pavilion was funded with $5 million in private donations and $1.5 million from the village.

“I was a big skeptic,” said village President John Heller. “There were a number of residents that got together to fight the Kress because of how much it was going to cost to maintain.”

General manager Jess Rienke said they’ve learned a lot during the first two years of operation and were on a good track before COVID-19 led to the cancellation of dozens of weddings. There were 31 weddings scheduled at the Kress this year, but they were able to hold just six scaled-back events.

“We walk a fine line of charging a rate that is accessible to people and will also generate revenue,” Rienke said. “We could make it expensive, and a lot of people couldn’t hold events here, but that’s not what we want this space to be.”

She said they also learned some of the limitations of the Door County market, and that it requires more than one person to pull off a full slate of events.

The Kress has received rave reviews and has become a sought-after venue for meetings and events. Heller credited Reinke for creating revenue streams for the venue.

“Now I believe it is a terrific asset to the village, and now that we have it, we’ve got to make it work,” Heller said. “I was a skeptic, but I’m glad we built it. I don’t think we’re ever going to have a break-even point.”

The village is working on finalizing language and dollar figures for a referendum question.

The Village of Egg Harbor has been discussing what many have deemed to be a parking shortage for several years, but all of that talk has resulted in little action so far. Kaaren Northrop, owner of Main Street Market, expressed her frustrations at the village’s Nov. 9 meeting.

“We’ve had two studies, lots of discussions, but nothing has changed,” she said. “Somebody has got to do something about this.”

In January, the village’s Plan Commission passed a motion to recommend a $200 annual fee in lieu of parking to be assessed to new businesses that can’t meet village parking requirements. The commission also voted to “direct staff to reflect other parking regulation changes as requested by the Plan Commission,” but the motion did not outline what those were.

During its Feb. 10 meeting, the village instead approved a $50 annual fee.

Some attendees of the January Plan Commission meeting thought the motion they approved included waiving the village’s rule that allows a business to count street-parking stalls within 500 feet toward its parking total.

Village President John Heller said he doesn’t know whether the Plan Commission did in fact change that regulation, but he said there should be more clarity from the commission on the issue.

“It’s ludicrous that in two years of discussion, there’s been one motion made and passed, and yet nothing has happened to it,” Northrop said. “Nobody wants the village paved over. But you cannot totally stick it to the people who were forced to put in these parking lots in the past. You have to somehow get all these people to get some skin in the game.”

Parking regulation will be on the village board’s Dec. 14 agenda.