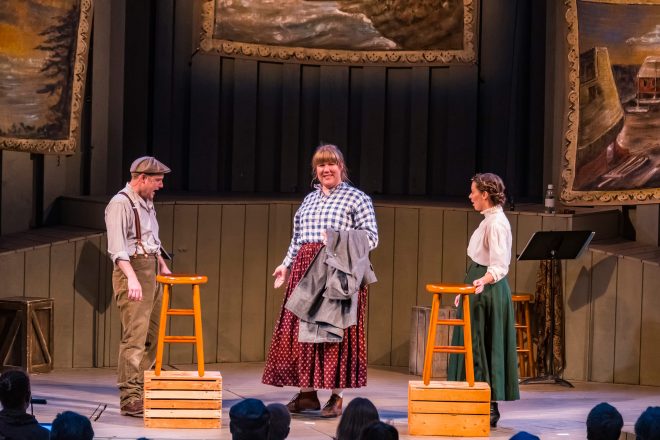 Reduced productions were anything but compromised

Not everything has gone back to normal. When we entered the spring and vaccinations were rolling out across the country, summer theaters were busy putting together safety plans and seeking approval from equity unions to see exactly what their 2021 seasons might look like. They all knew certain concessions would have to be made, whether those concessions took the form of shorter runs, smaller casts or reduced sets. For many theaters, it was a combination of all of these things that led to a season that was familiar, but different.

Different is not bad, though.

Theatergoers have come to expect certain things from Door County theaters. Most people know what they’re getting into when they see a show at Northern Sky or Peninsula Players. In the Twin Cities, Chicago and New York, however, the expectation is to expect the unexpected. Workshops, staged readings and one-actor shows are all commonplace in the greater theatrical landscape, and this year many audience members on the peninsula were treated to these things for the first time.

Northern Sky opened its in-person season in Peninsula State Park with The Fisherman’s Daughters, a staged reading of a musical that will be fully realized sometime in the years to come. Generally, readings have no set, no props and only minimal choreography as the actors read their lines directly from their scripts, placed on music stands before them.

Although The Fisherman’s Daughters had all of these elements, the actors were front and center, performing a fully memorized show complete with stage directions spoken aloud by each character. This approach fits the play quite well, considering it was set both physically and narratively inside Peninsula State Park. When the park is all around you, you don’t really need a set.

Door Shakespeare opted to produce a one-actor production of Hamlet, which was outstanding. Shakespeare’s work is incredibly malleable, and half the fun of seeing it is seeing how each company adapts his work differently. There are few adaptations of Hamlet that are more unusual than one in which a single actor plays every character.

Broken down to its most basic parts, a Door Shakespeare experience is part celebration of the text and part beautiful outdoor space, and this production captured those elements in their rawest form. With nothing but the stage and one actor, audiences were immersed wholly in nature and the story, and able to hang on every word.

At Peninsula Players Theatre, a smaller cast is not unusual, but a focus on plays with snappy run times revolving around human connection meant greater attention was paid to the honesty of the stories being told.

Talley’s Folly involved just two characters and had to rely on the energy the actors brought to the table to move the story forward. Romance in D has double that number in its cast, but it told such a realistic, down-to-earth story that you were able to turn off the part of your brain that keeps track of sweeping narrative details and just fall in love with the characters and their interesting, passionate conversations.

Third Avenue PlayWorks (TAP) will open its fall season in October with a small cast and an out-of-the-box story in its newly renovated space. I can’t wait to see how Gutenberg! The Musical! will navigate the still-uncertain waters, but I have no doubt it will be just as imaginative as previous TAP seasons have been.

This season has been a real treat for me. As someone who holds honesty above all else, I felt that many of the shows were a breath of fresh air. Don’t get me wrong: The theaters here always deliver quality shows with high production values – the lighting, sound, scenery, props, costumes and other elements of stagecraft – but when I say “honesty,” I mean something very specific.

I believe that actors should constantly be aware of the stage under their feet and the human being across from them. It’s not enough to say a line: Actors must look each other in the eye and tell each other something, honestly.

If a production nails that, everything else will fall into place. If it doesn’t, it won’t matter how lavish the set is or how energetic the choreography is – the show will be missing its most fundamental piece. This season, each company pulled back and refocused on what makes it special, and I think this treated Door County audiences to a richer theater experience than they’ve had before.

I hope as many things as possible return to normal next year. I hope theaters are able to recoup their losses and then some. I hope as many actors and technicians as possible are able to land contracts up here. I also hope that some of the spark that I saw on stage this year remains. I hope that stepping off the cliff, while terrifying, made clear some opportunities, and that we’ll continue to see new, more experimental productions from these theater companies in the future.