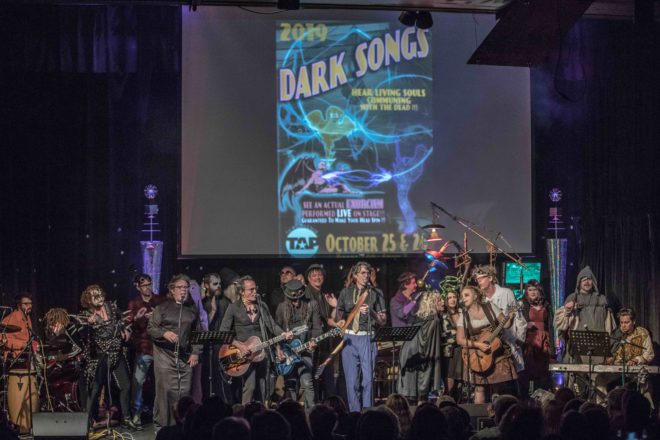 When I was a youngster, I got to perform at the Steel Bridge Songfest from 2009 to 2011. When I was down there, I soaked up as much as I could by watching bands and artists such as the Legendary Sons of Crack Daniels, Kim Manning and Groove Session.

Steel Bridge was always a great way to kick off the summer, and the memories I have are invaluable. That said, what I really wanted to do was Dark Songs. You see, Dark Songs – formerly known as the Edgar Allan Polka – was a chance for the artists in the Steel Bridge community to channel the weirdness inside of them and share a lovely, dark time with the small city in the cold October.

For a kid who grew up hanging out in his aunt’s tattoo parlor watching horror films and listening to Mötley Crüe way before anyone else his age was doing that, Dark Songs was the Halloween party that I dreamed of and longed to be a part of.

It took some time, but I finally got to realize my dream by participating in the 11th Dark Songs Songwriting Workshop and performing with the most uncanny crew of artists the underworld has ever seen! As a first-time Dark Songs writer returning to the Steel Bridge community after an eight-year hiatus, here are six takeaways from my week at the Holiday Music Motel:

What, you thought this was about music? It is, but we musicians can’t run on empty all the time. From Japanese curry to fish boils to fish tacos and a diner full of donuts, chips, coffee and candy, the amazing staff at the Holiday made sure we never had empty bellies.

Okay, wow. I knew everyone involved was hard-working and committed to their craft. That goes without saying. But it didn’t set in until the morning after our first bottle spin that this motel was packed to the gills with some of the most incredible and friendly people in music. Ever.

Words cannot explain how much growth I got to make as a person and as a musician from my week with this motley crew. I urge everyone reading this article to download the Steel Bridge Radio app to give your earbuds a joy ride with many hours of original music.

I swear it’s not what you think! Okay, it kind of is. For the first three nights, we assemble in the garage behind the Tambourine Lounge and spin the bottle to decide who our co-writers will be. Each group has three writers, but people are always encouraged to bring in outside talent for the recording process. Although your “spins” are your priority collaborators, you’re always welcome to do side-writes with other people you didn’t spin if you have the time.

All of the songs that are performed at Third Avenue Playhouse are from our week together, and people – I include myself here – are writing until the last minute. That’s cool because maybe that song won’t get to be in Dark Songs, but it could always come back around at the next festival.

The idea of everyone writing and recording at a motel is cool and all, but when you add the fact that the motel has been restored to its 1950s glory down to the last detail … Yeah, it’s pretty cool.

The rooms are painted either hot pink or mint green and furnished with 1950s decor. The motel has two floors, and sometimes I would just walk up and down to catch a smattering of what my fellow songsters were cooking up whenever I had some free time. It’s an adorable and inspiring building that has housed hundreds, maybe even thousands, of songs.

None of this would be possible without these two people. It takes a love of Music – with a capital “M” – and a love of community and the desire to put on an amazing show to do what pat and melaniejane do. There is no other way I would have been able to meet the people I met, let alone write the songs that I wrote during my week at the Holiday Music Motel.

As I write now, I can’t help but get choked up (and wipe the remaining makeup off my face – I performed as Gene Simmons for the two shows) while thinking about everything pat and melaniejane have done to make Dark Songs and the other Steel Bridge events happen year after year. A big, special thanks to the sound engineers and the crew at the Third Avenue Playhouse for helping us put on a great show and for letting us perform a live exorcism on stage!

Saying goodbye to my new friends on Sunday morning was tough, but some of the veterans gave me great advice about how to make it through the next couple of weeks. The most important advice was to keep in touch and keep writing. And I plan on doing just that.