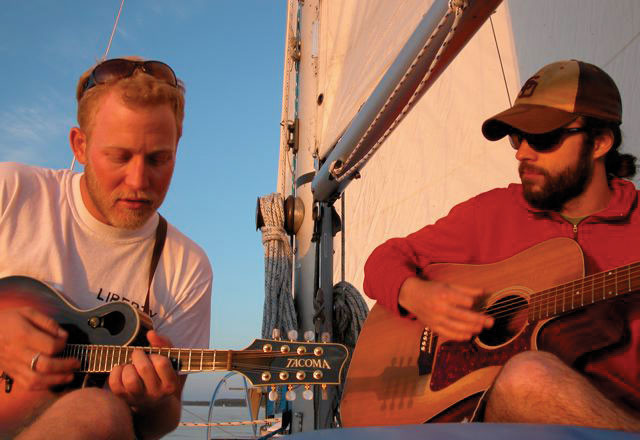 If it’s later than 5:00 pm and the Door County snow has melted, chances are that somewhere – not too far away – Nick Steingart is making music. Follow the sound of mandolins, violins, banjos, guitars and harmonicas; join the crowd, sit back and enjoy the show. For many locals, the first spotting of Steingart’s old Volvo wagon rolling into the county means the bluegrass boys of summer are back, and so is their music. 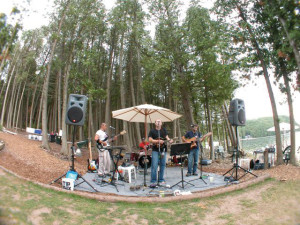 in Vail, Colorado – for nearly a decade. He has woven himself tightly into the working scene (in Door County as bartender, waitperson, sailor, and parasailing trainer; in Vail as a Personal Ski Instructors of America-certified ski instructor) and the music scene, becoming a bit of a local legend in both places. Meet him once and it’s easy to see why:  Steingart has remarkable charisma and energy. He’s athletic, creative, old enough to be truly accomplished, and young enough to be energetically and unapologetically boyish. Vibrant and charmingly modest (“I have groupies?”  he laughs, “Yeah, I guess I do. That’s great.”), Steingart seems sincerely surprised and delighted that he has a following. Did I mention that he’s good looking? He’s good looking.

But what folks are really following is a homespun, eclectic mixture of bluegrass, reggae, classic rock, country, indie and blues. Steingart’s take is eclectic and, like any good musician, he makes it look…easy. Primarily self-taught, Steingart plays violin, guitar, bass (“anything with strings, pretty much”) and his favorite instrument is the mandolin. He is a strong solo performer, as well as a seamless collaborative performer. When Steingart plays solo, he often accompanies himself by using a loop pedal. (A loop pedal is a device that allows you to record yourself, then automatically play it back, leaving you free to jam with the instant accompaniment. In a sense, it allows you to harmonize – with yourself – to get a more textural, filled-in musical sound while maintaining the intimate feel of a solo performance.) When he’s not performing solo, Steingart jams with individual musicians, some more formally than others, creating a playlist that’s hard to categorize. Longtime friend and fellow musician Nick Hoover (with Steingart, the other half of The Nicks, a Door County favorite band) describes it like this:  “To put it simply,” says Hoover, “Nick and I just play what we like, and we like a lot of different types of music. We might start off with some bluegrass, play a country standard, try out some obscure modern song that only one person in the crowd knows, and finish with an old Irish folk tune. A lot of times we don’t even know what’s next.”

“I call it reggaebilly soulgrass,” says Steingart. “And as long as it sounds good, we’re having fun and the crowd loves it, we’ve met our goal.”

Steingart was raised in New Berlin, Wisconsin, began playing piano at age five, and sang in the church choir. In fifth grade, through his school music program, he took up violin and continued to play throughout high school. But in his college years (Steingart has a Bachelor of Science degree in Environmental Geograp 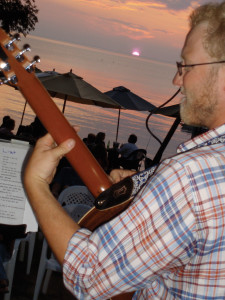 hy), when many self-taught musicians really take off, Steingart was musically quiet. “I was on sensory overload:  classes, people, fun. I didn’t really think about music.” Then one night, a roommate took him to hear a bluegrass band at a local bar and he found himself fascinated by the mandolin. “I realized the mandolin has the same scale as the violin, and I thought ‘Hey, I can play that.’ The very next day, I went out and bought a mandolin and I’ve never stopped playing.”

After graduating from college, Steingart found himself wanting to spend as much time as possible doing what he loved – skiing and playing music – and has carefully crafted a life that’s allowed him to do both. Spending summers in Door County and winters in Vail provides Steingart with enough stability to keep him disciplined (and fed), and enough adventure and change of venue to satisfy his wanderlust. So I asked this modern-day troubadour for his take on psycho-geography, the study of places affecting our thoughts, and if living in two places helps him with his creativity.

“For certain,” he says. “These are both fantastically supportive communities, with really great people who encourage music and encourage musicians. The scene is different:  in Vail we get big names playing in small clubs and there’s a ton of great stuff to listen to. Door County is filled with really talented musicians who I not only get to play with, but I get to know and learn from. Playing with Eric Lewis and Tommy Burroughs, or Paul Sowinski, Pat Judy and others, it’s amazing. Both places are so beautiful, with so much to keep me motivated and keep me happy.”

Bass player Paul Sowinski of Big Mouth appreciates the collaborative energy Steingart brings to the community. “Nick is very enthusiastic about performing and listening to music. He gets into it. He also enjoys getting any player who may be in the crowd to get on stage and bang out a tune or two. People look up to him as a respected performer. He lives life to the fullest and is an all ‘round good, responsible guy.”

Steingart is also his own booking agent and publicist, a job he considers a necessary evil and one that he doesn’t necessarily enjoy. Like most musicians, he’d prefer to spend his time playing rather than focusing on the details of the business. But to his credit, he appears to be doing  something right. These days, Steingart plays an impressive 100-plus days of the year. “I still have a hard time thinking of myself as a musician. I just love playing music; it’s all I want to do. I get to show up and play music and get paid – that’s a bonus.”

Steingart also maintains a basic, practical Web site that allows you to view his performance calendar, supplies contact information and gives you a taste of his music. If you haven’t heard him play, take a listen at www.nicksteingart.com, where you can hear a moving version of progressive bluegrass player Peter Rowan’s “Fetch Wood Carry Water,” or listen to Skin the Rabbit, Steingart’s Vail-based string band. And though he claims he doesn’t write music, you can listen to “BBQ Boogie,” a Nick Steingart original and tribute to a Vail favorite, Moe’s Original Barbeque. 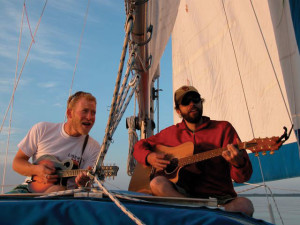 But the best way to really hear Nick Steingart is to hear him live. Check out the latest issue of the Peninsula Pulse to see where he’s at. From May to October, you can most often find him on the lawn at Fred & Fuzzy’s, in Fish Creek at the Bayside Tavern, wailing in the halls of Husby’s, or at the always-welcoming AC Tap.

“Really, we just have fun. Every time I play, and all the people I play with. We have fun, and then we have more fun, and the crowds seem to have fun, too,” says Steingart.