Regional representatives from the Great Lakes and St. Lawrence River Basin Regional Body, which is made up of the eight Great Lakes state governors and two Canadian premiers, were meeting at the University of Illinois-Chicago on April 21-22 to consider Waukesha’s proposal to divert water from Lake Michigan to its municipal water supply under the Great Lakes Compact.

Waukesha now gets its public water supply from a mix of shallow and deep groundwater wells. The groundwater in the deep aquifer contains high levels of radium, a carcinogen Waukesha needs to address per court order by 2018. By mixing water sources, Waukesha currently meets federal radium standards 11 months out of the year. 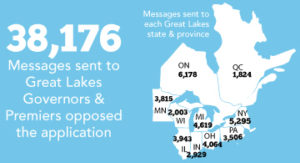 Waukesha wants to divert up to an average of 10.1 million gallons of Lake Michigan water a day, and return treated water via the Root River, a Great Lakes tributary. The Root River is polluted with phosphorus, and is officially designated as an impaired river because of this pollution.

The regional body meeting follows a two-month comment period that closed March 14. During that time, more than 11,200 people submitted comments, 99 percent of which explicitly opposed or expressed concerns or questions about the application.

During the regional meeting the two Canadian premiers (or their representatives) will formally weigh in on the application, while sitting face-to-face with representatives of the eight Great Lakes governors.

If they are unable to reach consensus, the regional body will recess and continue the meeting on May 10-11.

The Compact Council, made up of only the eight Great Lakes governors, will meet in late May or early June to reach a final decision. Only the eight Great Lakes governors have the power to veto the proposal, but a significant level of deference should be given to any objection from the Canadian premiers provided during the regional body meeting. The Compact Council may approve the application or it may approve the application with conditions attached. The vote must be unanimous for the application’s approval.

The Great Lakes Compact bans water diversions outside of the Great Lakes basin except under extraordinary circumstances and only as a last resort, never as a preferred option. A community located in a county that straddles the Great Lakes Basin, like Waukesha, may request water only if they have shown they do not have any viable, safe and sustainable water supply.

Many say there are alternatives for Waukesha to pursue, however in its study of the application, the Wisconsin Department of Natural Resources concluded the city did not have a reasonable water supply option. 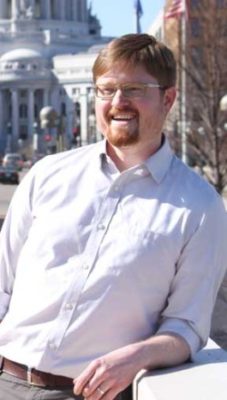 “Waukesha doesn’t meet the requirement,” said Ezra Meyer, water resources specialist at Clean Wisconsin, which is part of the Compact Implementation Coalition, a broad coalition of stakeholders opposing the application. “If they did, all of a sudden the number of applications increases dramatically. That’s not the precedent anybody wants to set.”

Clean Wisconsin had formally requested that the DNR deny Waukesha’s application, and even provided a non-diversion alternative that would save Waukesha money by updating its outdated technology to remove radium and other contaminants from the water.

Meyers said it’s hard to predict what the result of the two-day meeting will be.

“The states have shown a little bit where they stand in some of the information they put forward in technical findings or questions that have come out,” he said.

And will the uniformity of negative opinion from eight states and two provinces on the project carry any weight?

“We sure think so and hope so and can’t believe they wouldn’t be weighing that,” Meyer said.