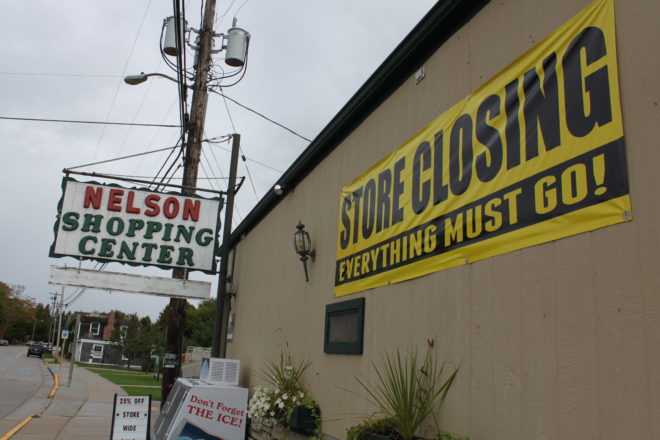 After 71 years in Baileys Harbor, regulation from the Department of Natural Resources (DNR) and a lack of support from both town and county zoning has forced Gary Nelson to close his storefront. While he will consolidate his hardware store into the Fish Creek location, the Baileys Harbor boy doesn’t want to leave the lakeside.

“I’ve tried to stay here. I want to stay here but I have to remodel, I have to become handicap accessible,” said Nelson. “It isn’t one issue that set this in motion.”

It started with an attempt to expand the storefront nearly 10 years ago. Nelson hoped to extend his retail space in front of his adjacent garage but the plan was stopped cold at the Baileys Harbor Plan Commission.

“They said I didn’t have enough parking, which is true, I don’t have any parking,” said Nelson. “They looked at the plans and said, ‘We would never allow this,’ so I just stopped right there.”

He then tried to repurpose a storage building into two more motel suites.

“That went all the way to the [county] Board of Adjustment,” said Nelson. “After the hearing they voted and just said no.”

The Board of Adjustment said Nelson did not provide enough green space for the motel units, even though he was not expanding his footprint or taking away any of the current green space.

“The day of the little Ma and Pa hardware store is going away fast and you either enlarge and bring it up to date and offer a better selection in an air conditioned, well-lit [building] with high ceilings… or you just go out of business,” said Nelson.

His final attempt at adding the needed expansion of the store stopped in 2011, when Baileys Harbor residents voted against expanding the Baileys Harbor core business district.

“I was negotiating to purchase a piece of property out at County E and Hwy. 57 right near Maxwelton, but I needed a zoning change and we needed the business core of Baileys Harbor moved,” said Nelson.

In 2011, the Baileys Harbor Town Board attempted to expand the business district zoning to County E on the south end of the town. After public backlash on the expansion of commercial development districts, the board held an advisory referendum. Residents voted against the expansion of the core business district and the board let the issue die, along with Nelson’s hopes of expanding his Baileys Harbor business.

Right around the time of that referendum, the DNR approached Nelson about the well on his property, which services the public restroom in the retail store and the attached motel. His well, drilled in 1950, had a diameter of four inches. But the DNR wanted his well to be six inches if it was going to be servicing a motel.

Since the DNR was forcing Nelson to abandon his current well and drill a new one, a representative walked the property with Nelson to determine where he could put his new well.

“We walked the backyard. She said there’s no place back here that you can drill a well,” said Nelson.

The only place Nelson could drill a well that followed the standards set by the DNR was in the middle of his front yard, as long as he got a variance for being too close to the highway. When he contacted a well driller on the feasibility of a front yard well, they told him that between power lines above and other cables buried below, it was impossible.

When the DNR came back on Sept. 21 of this year to see where he had built his new well, he told them, “You’ve forced my hand. I have to close.”

It was then that the DNR explained that he did not have to abandon his current well as long as it fell under the standards of a private well as opposed to a commercial one. Nelson called this the “25 rule,” and it has to do with how many people the well services.

In Wisconsin, as long as a well has less than 15 connections and services fewer than 25 people, it is considered a private well. This means that Nelson can’t have public restrooms or operate a motel, but if the retail store was closed, he could still operate the lodging facility with long-term leases of at least six months. As long as the total number of Nelson’s employees and tenants does not exceed 25 people, the DNR will leave Nelson alone. Instead, he will be turned over to the Department of Agriculture, Trade and Consumer Protection, which keeps records of private wells and would still find Nelson’s well to be noncompliant.

“I may put in long-term rentals starting in November, just in the motel part,” said Nelson. “The motel will become long-term apartments and I will rent those until I sell everything.”

But selling a long-term lease when he is trying to sell the property brings its own difficulties.

“I might get someone to say, ‘Yeah I’ll sign up for a year’, and then it sells next month and everybody gets kicked out. It’s a tough sell,” said Nelson.

He said the town has expressed interest in purchasing the property, but gave no further comment.

In the end, unable to expand his business while watching his expenses rise left Nelson with no choice but to close down the Baileys Harbor store.

“Fish Creek is still functioning. We’re going to beef up the inventory over there, make that a bigger and better store,” said Nelson. He is taking all of his full-time employees to Fish Creek along with all of the charge accounts and rewards programs to make the transition as easy as possible for his Baileys Harbor customers as long as they are willing to drive to the bay side.

“Expenses keep going up. I’m staring at some big ones and I just decided mid-summer I’m going to pull the plug. It’s been a good run. It’s been there 71 years. I’ve had a lot of great customers, met a lot of people who I consider friends. We’re 10 to 15 minutes away,” said Nelson. “I’m going to lose some customers, I know that, but I get a very warm fuzzy feeling when my Baileys Harbor people show up over there.”