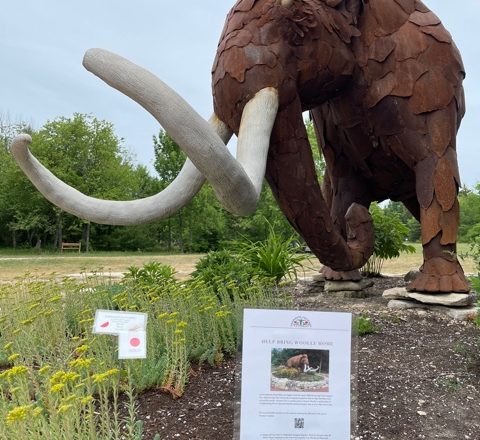 If all goes as planned, “Woolly” by artist Carl Vanderheyden will be rehomed from Edgewood Orchard Galleries in Fish Creek to Sturgeon Bay’s Bayview Park on the city’s west side. Photo by D.A. Fitzgerald.

A fundraiser is underway to move Woolly to Sturgeon Bay

Close by the City of Sturgeon Bay lies the eastern terminus of the Ice Age Trail in Potawatomi State Park. The trail heads west from there, through the city, and then some 1,200 miles to the trail’s terminus on Wisconsin’s western border.

Sturgeon Bay became an Ice Age Trail Community earlier this year to mark its connection with the Ice Age National Scenic Trail. It seems fitting, then, that a mammal that roamed North America during the age of the trail’s namesake would be at home somewhere within the city’s borders.

She knew the life-sized, seven-foot by eight-foot by 10-foot metal mammoth sculpture titled “Woolly” by artist Carl Vanderheyden lived at Edgewood Orchard Galleries in Fish Creek. She floated the idea to city leaders that they should bring him home to Sturgeon Bay. They were game but said they couldn’t afford it. That’s when Kellems told herself, “I’m going to make this happen.”

Beth Renstrom, executive director for the Sturgeon Bay Historical Society Foundation’s granary project on the city’s West Waterfront, helped Kellems pitch the idea to the Sturgeon Bay Arts Board earlier this year. The board, and then the Common Council, agreed to accept the donation of the sculpture if Kellems could raise the $26,000 needed to buy Woolly. Destination Sturgeon Bay got on board to handle the donations and make them charitable contributions.

Kellems said they’ve now raised about three-quarters of the funds needed to relocate Woolly to his new home “right there on the waterfront” in Bayview Park on the city’s west side.

J.R. Jarosh, who owns Edgewood Orchard Galleries with his wife, Nell, was on the ferry heading to Washington Island to transport another sculpture when he talked about Woolly’s new home. It won’t be easy letting Woolly go – the sculpture has been a landmark at the gallery for the past four years, and customers have made it a tradition to take photos beside the beast.

But Jarosh said it will be near enough for their customers to visit the mammoth in Sturgeon Bay. And really, they couldn’t have asked for a better outcome.

“It’s kind of the most perfect place for any sculpture we’ve ever sold,” Jarosh said. “What could be more perfect than a mammoth at the end of the Ice Age Trail?”

The almost poetic perfection inspired the Jaroshes to donate 10% of the cost toward the cause and to include transportation in the price. They’re also giving the city all the free dolomite it can transport for the installation of the piece.

When the day comes, Jarosh will load Woolly on a flatbed and leave at the crack of dawn to encounter less traffic while making the “march of the mammoth” at 30 mph the whole way.

Kellems said that if all works as planned, the funding will be finalized, and Woolly will be installed by Labor Day weekend.

“It’s really exciting that Chris took the mammoth by the tusks to make this happen,” Jarosh said.