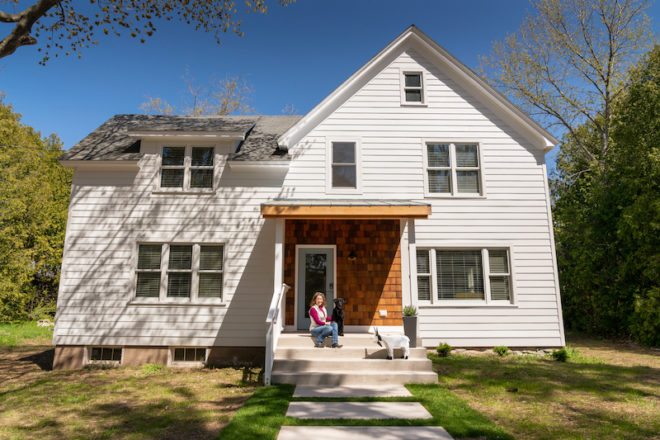 Pamela Wattenmaker undertook the challenge of transforming the cottage with the help of contractor Zach Kalms. Photo by Brett Kosmider.

A 1920s-era rental cottage rests on girders at the Liberty Grove Historical Society Museum in Ellison Bay, awaiting a permanent foundation. A couple of miles north, a renovated home on Garrett Bay Road hosts a new family. Although the buildings now look different, they have one thing in common: Both used to belong to Gus Klenke and his family.

In 2019, Klenke’s granddaughter Gwen Mickelson put Gus’s former home on the market. The property — just up the road from the iconic, often-painted and often-photographed Gus Klenke Garage — included the main family home and a separate rental cottage. It’s the only cottage remaining of the original seven that Gus’s wife, Magdelene, designed and managed for summer tourists. Klenke’s granddaughter offered the cottage to the historical society and sold the property to Pamela Wattenmaker.

From there, the buildings have taken different paths to preservation.

Nancy Kurtz, curator of the historical society museum, said preserving the area’s history is important to the people of Ellison Bay.

“They care about keeping their history. They don’t want to lose the flavor,” she said.

Wattenmaker, an artist by trade, said the location and zoning are what initially attracted her to the Klenke property.

“Originally when I saw this house, because I am an artist, I thought it could be a great gallery,” Wattenmaker said.

But then, as has happened so often recently, the COVID-19 pandemic changed her plans. Wattenmaker decided she didn’t want to operate a retail space, so she kept the building as a single-family home and renovated it with the help of contractor Zack Kalms.

“I was excited to get called,” Kalms said. “Growing up on Old Stage Road, two miles from Ellison Bay, I obviously know the [Klenke] gas-station area very well.”

The Klenke home renovation was Wattenmaker’s third real estate project in Door County and, she said, the one that required the most work, including installing a new well and properly removing old asbestos siding.

“I literally rebuilt the house from the cellar up to the attic,” Wattenmaker said.

She explained that from a design perspective, she wanted to open up the floor plan on the main level to create a more efficient, brighter space. She was also able to keep the wooden floors in the dining room.

Kalms agreed that the project had its challenges.

“Floors were four inches off,” he said. “The whole building had settled and shifted, so every corner we opened needed to be adjusted. The floor joists were packed with concrete and mortar and stones, and it had all rotted out, so we had to replace floor joists.”

Kalms’ challenges went beyond the structure itself. The Klenke home renovation was his first big project during the pandemic, so he had to come up with COVID-19 safety protocols for the workers and deal with shortages of materials.

Given the scope of the repairs, Kalms said that Wattenmaker could have just demolished the house instead of renovating it, but he’s glad she didn’t.

“I feel like there’s something important about taking that building and saving it,” he said. “Having a family farm myself, it’s important to see these things we had when we were younger, that our parents had and our grandparents had, passed along, even if they change hands, that they still remain.”

According to Kurtz, keeping and repurposing old buildings is part of what gives Ellison Bay its distinctive character. Kick Ash Coffee resides in an old church, for example, and Brew coffee shop used to be a machine shop.

“There is so much that is a wealth of history,” Kurtz said. “It’s a living, breathing community, but it preserves its history.”

Wattenmaker sold the renovated home in December and said the project had a positive effect on the neighborhood.

“I’m just so happy,” she said. “Having the neighbors walk by — they were always so friendly, and you could tell they genuinely appreciated having that house redone.”

Meanwhile, the rental cottage at the historical society museum will get a permanent foundation later this year, along with some minor repairs. Then it will be used to display historical items.

Kurtz believes it’s good to remember events and lessons from the past.

“It’s important because we get a better feel for who we are,” she said.