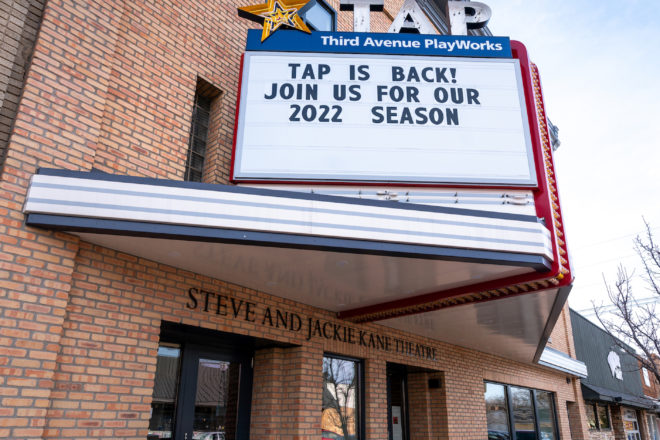 During the pandemic, Third Avenue PlayWorks renovated its building, hired new leaders and changed its name, but its mission stayed the same.

The Third Avenue PlayWorks of today and the theater company of three years ago seem like two very different entities.

That’s courtesy of the pandemic, which shut down the theater – known as TAP to most – and forced its leaders to reassess their goals. Artistic director Jacob Janssen said that reassessment led to a complete style overhaul, including a renovated building, new leadership and a different name.

Still, not everything changed during the pandemic. TAP’s original mission has stayed the same, with the theater aiming to be an active, integral part of the Door County community while also making theater more accessible to both locals and visitors, Janssen said. His goal is to make the theater more like a library: a collective space where people of all walks of life can connect and share stories.

“We need to be this place where every single person in this community feels fully welcomed,” Janssen said.

TAP board member C. Michael Wright sees Janssen’s work as a continuation of the work done by former artistic co-directors James Valcq and Robert Boles, who announced they were leaving in the summer of 2021. Janssen took their place in December 2021.

“The kind of work we’re doing is similar to what James and Bob were doing, but our commitment to the community, and expanding and deepening that impact, is another step forward,” Wright said. “Now we have more bodies in place and more energy in place to take it further.”

One way of making the theater a more accessible, welcoming community space was by refurbishing it and enabling it to accommodate a larger audience and more elaborate productions.

So in 2019, the theater started Reimagine TAP, a capital campaign to raise funds for renovations. By the time the pandemic hit in 2020, TAP had received a $1 million lead donation, and it eventually reached $2.5 million with the help of more than 300 other donors.

Though TAP had not met its $3.5 million fundraising goal, its leaders went ahead with the renovations anyway, wanting to take advantage of the theater’s vacancy. If it had not been for the pandemic, TAP would have had to have found another venue in which to rehearse and perform while the renovations were in progress. With the theater dark anyway, the board and then–managing director Amy Frank decided it was an opportune time to get the renovations done.

Construction began in July 2020, and by October 2021, work was complete: TAP had its own scene shop, an elevated tech booth, a rehearsal space, actor apartments and improved dressing rooms.

Formerly the Donna Movie Theater, TAP had been converted from a 1950s movie theater during the late 1990s, and now it’s a fully self-contained theater – a rare thing, according to Janssen.

“Most theaters have a scene shop somewhere far away, and you’ve gotta truck everything in, or they’ve got their props somewhere else,” Janssen said. “We’ve got it all in one place.”

Although audiences don’t see the backstage improvements, they will likely notice them in the more elaborate set designs onstage. They will also notice the larger size of the theater’s lobby, which now contains a concessions area, a new box office and an art gallery, as well as the bigger stage and seating for 124 people. That seating includes wider aisles and many prime seats for those with mobility issues.

“Usually in a theater or event space, the spaces for those with disabilities is a space in the back of the room,” Jannsen said during a walk-through before the reopening. “We wanted to make the same great experience available to all of our audience.”

TAP also renewed its mission by bringing in fresh voices. Boles and Valcq had been invaluable to the evolution of TAP, and Frank led the organization through the capital campaign and the transition to a new artistic director when Janssen came on board in December 2021.

A Kiel native, Janssen had worked in New York as the co-founder of the off-Broadway theater company The Coop before moving to Door County.

Although the transition from New York to Door County was a major one, Janssen had connections in the area before he moved. Dan Klarer, who has worked onstage and backstage with every professional Door County theater, had previously worked with Janssen in a small Shakespeare troupe, as well as in a sketch-comedy group at UW-Stevens Point.

“Having been working in Door County since 2006, and having the perspective of working at all four theaters, I have not been as excited about the type of work that’s going on in the county until now – until Jacob got this job,” said Klarer, who has also worked at Door Shakespeare, Northern Sky and Peninsula Players.

Janssen’s onboarding was not the end of the leadership changes at TAP. A new technical director, Alex Polzin, was hired early in 2022, and former managing director Amy Frank departed in August 2022.

“We bring together a group of people every single night to be in community together,” he said. “That’s what our work is. The shift from ‘Playhouse’ to ‘PlayWorks’ is directly tied to the sort of active nature of what we do.”

One example of TAP’s active nature plays out through its newly created Community Partner Program. For all of its shows this year, the theater company has partnered with local organizations to fundraise and host educational programs.

During the October 2022 play Birds of North America, which touches on themes of climate change, TAP supported local environmental groups. On Oct. 2, it hosted a pay-what-you-will preview of the show, with all proceeds benefiting Open Door Bird Sanctuary. And on Oct. 4, it held a roundtable discussion when all nine environmental groups in Door County came together for the first time. During the discussion, they planned for further collaboration to examine how they can further care for and serve as environmental stewards in the county.

“This means that by doing this play, by having that event, we can have a material benefit and impact on the life and livelihood of everybody in this county,” Janssen said. “Art can have this sort of butterfly effect, and I think it has to. We can’t just think about it like an entertaining evening; it has to be this spark, this catalyst for conversation. And at TAP, we think of ourselves as a theater worth talking about.”