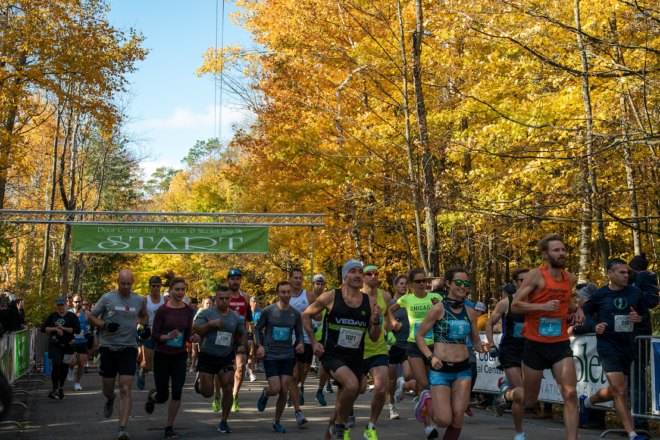 Relena Ribbons (pictured above, fourth from the right), who is from Appleton, said she did not have any expectations to win and didn’t realize she was in a winning position until later in the race. Photo by Rachel Lukas.

“My mom would like to take credit for signing me up for a diaper derby when I was a baby,” Ribbons said. “I won.”

Fast-forward some 34 years, when Ribbons was the first woman to cross the finish line of the 2021 Door County Half Marathon – the first time she had run the race. But don’t call her a serious runner.

“Enthusiastic, maybe?” she said, her tone shying away even from the label “competitive runner” when recalling her days running for her high school and college teams.

For Ribbons, running is a “joyful experience” – one that was taken from her for eight years after a drunk driver struck her as a pedestrian. The accident, which happened while Ribbons was in college, left her with internal bleeding, several cracked ribs and issues related to post-traumatic stress that lingered long after the physical injuries had healed.

“I think that is why I am so enthusiastic about my running now,” said Ribbons, who eventually rekindled her love for it while pursuing her PhD at the University of Copenhagen in Denmark. “I was enjoying running again, but it wasn’t the same as training for a specific goal. It was so hard to get started again.”

In Denmark when she ran, there were nagging injuries – painful reminders of the accident. She was also eight years older. She was happy to be running again, but something was missing.

“I can remember thinking, ‘This used to be so easy and – joyful,’” she emphasized.

Ribbons eventually found that joy out on the race course after a friend encouraged her to sign up for a trail marathon held in the national park that neighbored the university.

“I had no idea what I was doing,” Ribbons said, thinking back to training for her first long-distance event. So she did what most runners do: She downloaded a plan she found online and made a point to stick to it as best she could.

“It was both brutal and wonderful,” she recalled, and it’s an experience she hopes to replicate during Saturday’s Door County Half Marathon.

“I remember crossing the finish line last year thinking, ‘This is the hardest race I’ve run in my entire life,’” she said. “My lungs were on fire the entire time, and yet it was super joyful because there was a crowd of people at every turn.”

Ribbons, who won the women’s race with a time of 1:22:19 (that’s an average pace of six minutes, 18 seconds), said she had no expectations of winning last year’s race, calling the experience a “magical unicorn coalescence of Door County surprises.”

“I was stunned. I was definitely not expecting it,” she said, admitting that it’s still surprising to see photos of herself breaking through the tape on many of the advertisements for the Door County Half Marathon.

But it did explain an email she’d received in advance of the race from one of the event organizers who had questioned her estimated finish time. Apparently, Ribbons didn’t realize that her projected time had put her well in front of other registered runners’ anticipated times.

Although attitude does play an important role in the outcome of a race, a runner doesn’t win races on joy alone. Ribbons also puts in the work, focusing on high consistency versus high mileage.

“I aim for consistency whenever possible,” she said. “So that means being flexible when injuries or illnesses come up.”

Recently, she’s turned more of her attention to taking care of her body between training sessions, especially in the areas of stretching and recovery exercises.

“As a runner, I am often neglectful with stretching,” she said, “so I’ve tried to be more diligent with that and incorporating more physical-therapy exercises.”

She has also learned to key in on the best way to fuel her body.

“Each person’s body is their own, but I find that underfueling is probably a bigger problem for runners,” she said. “You need energy to perform and meet your goals.”

For Ribbons, that means eating plenty of fruits and veggies – she strives for five servings a day. But what she really craves while training? Pancakes with real maple syrup. “Maple syrup consumption is a beautiful part of my diet routine,” she said.

It may sound peculiar, but with its natural sugars, simple carbohydrates and steady supply of vitamins and minerals, maple syrup easily converts to glucose for fast-acting energy during endurance sports.

Comebacks are never easy, but when you’re having as much fun as Ribbons is, the work is worth the effort.

“I get really elated when my body is moving,” said Ribbons, who enjoys running to music and admits to casting good running form aside if a favorite Dua Lipa song starts playing during a run.

Her advice to her fellow half marathon runners? Find whatever brings you joy that day, and have fun with it.

“Even if you aren’t hitting the goal pace you set for yourself that day, even if the race isn’t going the way you hoped, pause and simply recognize the run for what it is,” she said. “Find something to be joyful about.”