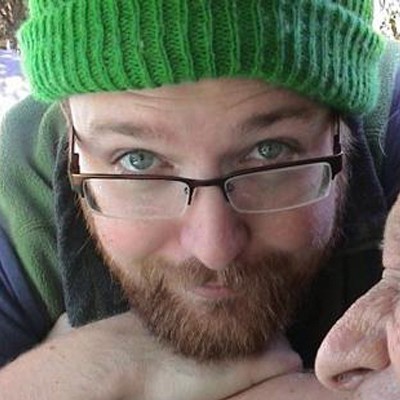 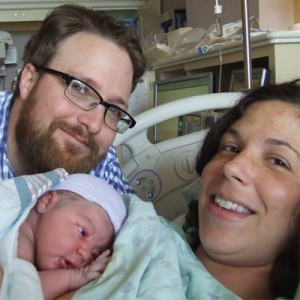 Eddie with his wife Megan and son Oliver.

Though he stood just five feet, six inches tall, Eddie was always the life of the party. He had a way of entering a room, absorbing it’s light, then throwing it back out brighter than it came in. His smile was always wide, his laugh always contagious, his hug always genuine.

“He was always the light in the room,” said his sister Mettie Spiess. “I don’t know where it came from, it was just always there in him.”

On Monday, March 17, that light was extinguished when Edward Albert Strege died unexpectedly at his home in Milwaukee. The Egg Harbor native, beloved son of Ronald and Bernadette Strege, husband of Megan and loving father of Oliver, was just 32 years old.

Tuesday, as news of Strege’s death spread to his masses of friends, messages of sadness and disbelief dominated the Facebook feeds and phone conversations of thousands of people in Door County, Milwaukee and beyond. But the tears could not drown the memories of a man universally described as “the life of the party.” 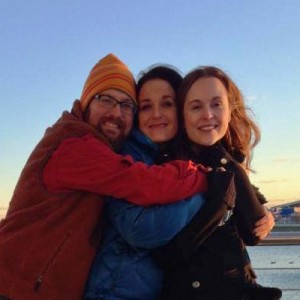 Eddie and his sisters Sarah and Mettie.

He was so funny, his personality so big, that before he died one of his best friends suggested he make a business out of it.

“The guy should honestly rent himself out as a groomsman,” James Larsen said. “You could pay him to come to your bachelor party and wedding, and he would just make it so much more fun.”

Larsen would know. Strege showed up for Larsen’s bachelor party in a blue leisure suit. Walking down a Milwaukee street later in the night, he decided he would do away with the pants.

Asked why he said simply, “I hate pants. It’s my thing.”

Costumes and getups were also his thing. Mardi Gras, Halloween, Oktoberfest – if there were a theme you could count on Eddie to show up in something ridiculous. If there wasn’t, he loved to sport a bowtie, and few looked better (or happier) hoisting a huge stein of beer.

Whatever it took to put a smile on someone’s face, Eddie would do it. It’s no surprise he became one of the most-loved bartenders in Door County, and later Milwaukee.

In his years bartending at Husby’s and the Sister Bay Bowl in Sister Bay, Eddie’s personality was on full display. He knew everyone and most called him simply “Little Eddie.” This was in part because he was, well, little, but also because he followed in the Husby’s footsteps of “Big Eddie,” Eddie Rockwell. 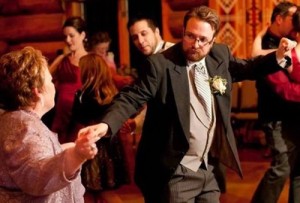 Little Eddie was a shorter, red-haired, rose-cheeked version of Big Eddie, and shared the same talent (but his own style) for being equally at home with customers of all stripes – old or young, rednecks or hippies, moms on a lady’s weekend or bikers boozing away the day. He greeted each customer with a big smile and often a hug. Eddie knew what people needed, be it an ear, a smile, a laugh, or a jab, and he knew how to deliver it.

When he and Megan moved to Milwaukee he wasted no time capturing the hearts of customers at the Old German Beer Hall, where he became another community’s favorite bartender.

“He made you feel like you were walking into a German version of Cheers,” wrote Tom Flessert, one of his regulars. “He knew everyone’s name and made you feel like you were longtime friends from the first time you met. A lot of the character of the place didn’t come from the pictures on the wall or the music, it came from a special someone that can’t be duplicated and is tearfully missed.”

But Eddie was much more than a great bartender. His wife Megan was his perfect match, and his son Oliver the joy of his life. On his way home each day, “he would pick the best and most beautiful flowers and leave them on the windshields and door steps of everyone he loved,” Megan said. He never left their Bayview home without stopping to say, “I love you guys!” 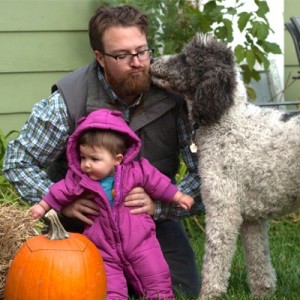 With his boys, son Oliver and the dog he loved, Griffin.

He was the rare man who was never afraid to tell people what they meant to him, be it family, old friends, or his customers. He cared deeply for them all.

“I hope people remember the happiness that he brought into this world,” said Pete Rericha, Eddie’s oldest friend. “There was some magic in that guy that I can’t put my finger on, but I’ll never know anyone like him again. They don’t make another Eddie.”

Eddie’s older brother Ronnie died when he was young, and his friendship with Rericha helped fill the void. The two were inseparable.

His travels earned him many more great friends in Australia, Germany, Vail, and elsewhere, yet Door County was never far from his mind or his heart.

He loved being an active part of the county and soaking in everything there was to love about the place he called home. He adored his mom and did his best to drive her crazy, along with his sisters Mettie and Sarah. He played marathon cribbage sessions and hunted squirrels with his father, went fishing and sailing with his friends, and prowled for morels with his dog Griffin at his side. 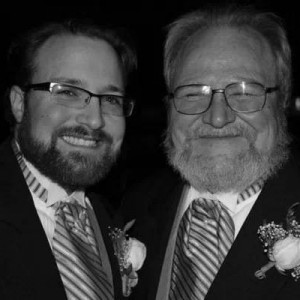 With his Dad, Ronald.

He loved to golf the greens of Peninsula State Park and wage futile battles for the Red Jacket at the annual Red Putter Pro Tournament, where his presence will always be felt. His wedding to Megan took place on the course’s 10th hole, the church.

As the loss of his “brother” settled in, Rericha tried to move beyond the pain to focus on the incredible, if all too short, life that his friend lived.

“He was so courteous and caring and he just spread joy every place he went,” he said. “I know I’ll miss him all my life, but as sad as I am, I truly feel lucky to have known him and called him my friend.”

Edward Albert Strege was the beloved son of Bernadette and Ronald Strege, and son-in-law to Mary and David Erickson, brother to Mettie, Sarah, and Ron. He lived in Milwaukee with his lovely wife, Megan Erickson, and loved son, Oliver.

Memorial services for Edward Albert Strege will be held at Huehns Funeral Home on Friday, March 21. Visitation will start at 10 am, with a service of remembrance to follow at 1 pm. 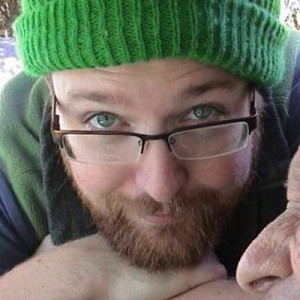 A memorial fund has been established at Baylake Bank to help the family with funeral costs, as Eddie did not have life insurance. You can contribute via PayPal by clicking here. Contributions may be made in person at any Baylake Bank location, or you may also send a check or money order made out to “The Ed Strege Family Memorial Fund” to: