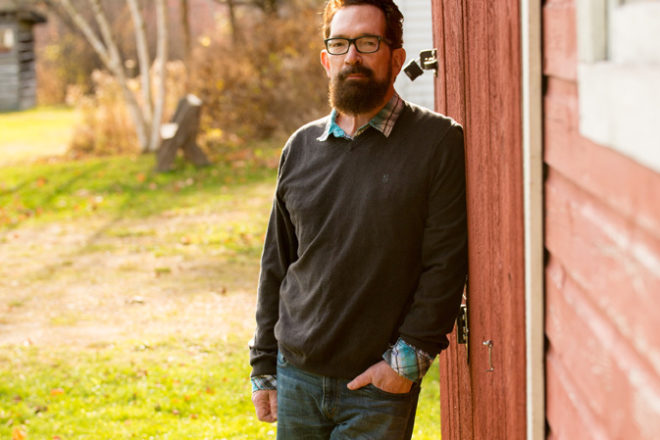 Though Northern Sky Theater enjoys growing visibility, noteworthy figures from its past may not always be widely recognized. Such is the case with Gerald Pelrine, who passed away Jan. 15 from a heart attack at age 64.

Because he left the theater in 1991 after its first year, many may be unaware that Gerald was one of our two co-founders. He’d been with the Heritage Ensemble, our predecessor troupe, for seven seasons when Ensemble creator Dave Peterson called us into his book-stuffed UW-Madison office in the fall of 1989.

Having devoted 20 years of his life to the Heritage Ensemble, Dave had decided to retire from the university and offered us the theater. Gerald and I were stunned, yet we soon began exuberantly fashioning the nonprofit we eventually christened American Folklore Theater (AFT).

That name was substantially Gerald’s idea. We’d been tossing around possibilities for weeks when, one night behind stage, he suggested that what we did was to bring folklore to life. Neither of us anticipated that this word would prove confining, eventually leading to a name change to Northern Sky Theater in 2015.

That’s because both Gerald and I were passionate folkies who were enthralled with American history. Indeed, Gerald’s signature mustache and grand acting style almost made it seem as if he’d stepped out of a time tunnel from the 19th century. You could easily imagine him treading the boards by lantern light in some dusty Old West town, mesmerizing the hard-handed locals with his flamboyance.

One of Gerald’s greatest gifts as an actor was his stentorian voice, which could soothe like a mother’s caress or penetrate like a javelin fashioned from thunder. Every show I created for the Heritage Ensemble started with a weighty quotation from the likes of Kipling or Emerson or Melville. And though virtually all those shows included the amazing Fred Alley, we always collectively chose Gerald to deliver the opening monologue.

Gerald’s signature role was John Muir in The Mountains Call My Name, first produced in 1989 with a cast of five. It was his idea to hide motionless under a blanket for half an hour while the audience entered so he could thrill them by springing up at the top of the show.

Muir’s mixture of elevated language and engaging storytelling was a natural fit for Gerald, who performed a one-man version for environmental organizations after he left us. His riveting rendition of Muir’s classic dog adventure story, “Stickeen,” can be found on the tribute CD produced for the John Muir National Historic Site in Martinez, California.

Both on and off the stage, Gerald was hilarious, ironic and self-effacing. He threw himself into any role, no matter how ridiculous, from the Head Spotter of the Weather Makers in Sandburgland to the magniloquent miner in Badger Forty-Niners who was preparing to “absquatulate the ranch.” Longtime Heritage Ensemble member Tim McNurlen recalled that when Richard Burton died, Gerald quipped, “More room at the top!”

Gerald also was a deep listener and could offer wise counsel. When I was bummed at being assigned a minor role in a show, he quoted Stanislavski: “There are no small roles, only small actors.” He selflessly urged Fred Alley to join us in our new AFT, which Fred did a year and a half later.

At the end of The Mountains Call My Name, John Muir declares, “Myself, I fear not death. This good and tough mountain-dwelling flesh is not my final home, and I’ll creep out of it and fly free, and grow.” Gerald might easily have authored these words himself. And with his passing, it’s appropriate to recall how significant this kind-hearted soul was to both the artistic vitality of Door County and those of us who were privileged to know and love him.