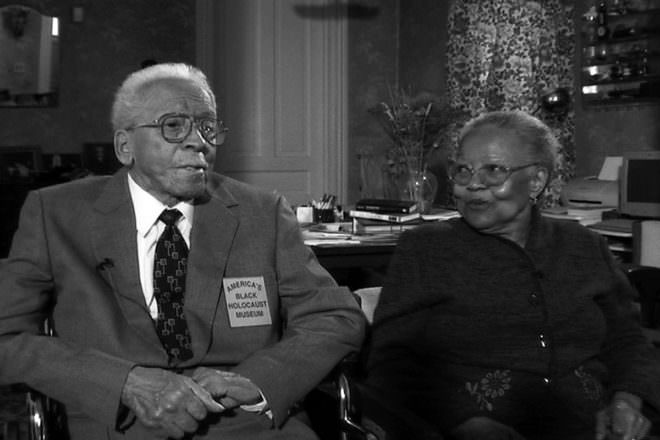 Dr. James Cameron and his wife Virginia at their Milwaukee home on their 68th wedding anniversary, a month before he died in June 2006. Photo courtesy of Dr. Fran Kaplan, project coordinator, America’s Black Holocaust Museum.

Blood on the leaves and blood at the root,

It was 16 years ago last month when I met James Cameron, the only known survivor of a racial lynching, at the Milwaukee museum he founded, America’s Black Holocaust Museum. 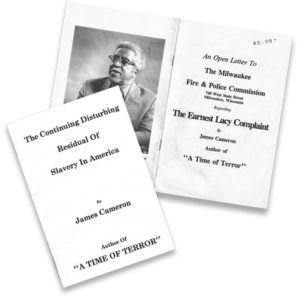 Cameron was about six weeks away from his 87th birthday when we met, but the night of Aug. 7, 1930, was still fresh in his mind. Just to remind him daily of that night, he kept on his desk a photo of his two friends – Thomas Shipp and Abram Smith – hanging like the strange, bruised fruit of Billie Holiday’s song from a tree as white folk crowd around beneath them. Photographer Lawrence Beitler captured that image and made thousands of copies. It was that photograph which prompted Abel Meeropol to write the song “Strange Fruit.”

The mob that snatched teenagers Shipp and Abram from the jail in Marion, Ind., that night also grabbed 16-year-old James Cameron. Like them, he was beaten by the mob and a thick, rough rope was placed around his neck.

“Brutally faced with death, I understood, fully, what it means to be a black person in the United States,” Cameron wrote of that night in a book called A Time of Terror: A Survivor’s Story.

A full 70 years later, Cameron still talked of his rescue from death with a sense of wonder as he told of a woman’s voice rising above the din of the lynch mob – a strong, authoritative voice –commanding the lynchers to release Cameron. The mob went silent as the rope was removed from Cameron’s neck and he was released into the sheriff’s custody.

Cameron returned to Marion years later and tracked down people who were in the crowd, and no one remembered hearing the woman’s voice but him. He thought it might have been the voice of an angel.

“Sometimes I just sit down and shed tears of joy,” he said. “I don’t understand it.”

Cameron admitted to me that a crime took place the night of Aug. 6, 1930, when he and his two friends went to the local lover’s lane to rob someone. He also admitted that he held the gun when the trio descended on a young white couple in their car, but said before anything happened, he handed the gun to one of his friends and ran away. He had been running for several minutes when he heard three gunshots. He later learned that the young man in the car, Claude Deeter, 23, had been shot and killed and his girlfriend was raped, although the rape allegation was later withdrawn.

“I think and pray every day for my buddies, the people that was in the crime, the man who got shot,” Cameron said. “I think about them every day.”

Cameron was tried for being an accomplice and was sent to prison for four years. When he got out of prison at the age of 21, Cameron knew he was going to devote his life to racial equality.

“I know God picks out people to be healers, teachers, prophets,” he said. “I’ve been wonderfully blessed by God. He’s kept me from a whole lot of stuff.”

From 1942 to 1950, Cameron served as Indiana state director of civil liberties, and during that same time he founded three National Association for the Advancement of Colored People chapters in Indiana. In the 1950s, Cameron returned to his native Wisconsin (he was born in La Crosse), settling in Milwaukee. In 1993, then-Indiana Gov. Evan Bayh issued a pardon to Cameron for wrongful conviction.

During a trip to Jerusalem with his wife, Virginia, in October 1979, Cameron got the idea for a museum dedicated to the genocide practiced by white America against black America. It would take nearly a decade to make it happen, but on June 18, 1988, Cameron opened the doors of America’s Black Holocaust Museum at 2235 N. 4th St. in Milwaukee. 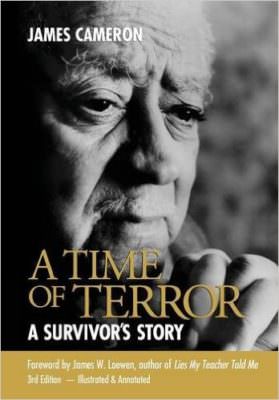 Cameron was not happy about the lack of progress in race relations back in 2001.

“For every step forward we take two steps back,” he said. “This is a white and a black country. All have contributed to our culture. There’s no use having all this discontent between our borders. That’s what’s destroying this country. Everybody here should be given the same rights and opportunities, regardless of race, creed, color or language. That’s the way it’s supposed to be.”

But he had high hopes.

James Cameron died on June 11, 2006, at the age of 92. His museum closed in 2008 due to financial troubles, and is now a virtual online museum, abhmuseum.org.

Late last year, the Milwaukee Journal Sentinel reported that the former museum and another building would be demolished to make way for a four-story building that will include room for the museum, a café and 41 affordable apartments, with an April 2018 completion date.