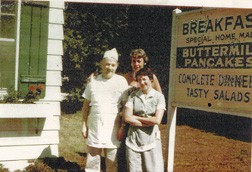 A little bit of Sister Bay died today. When I drove through downtown Sister Bay, it was gone. Johnny’s Cottage, a Sister Bay icon, later the Sister Bay Café, was leveled by a wrecking crew. 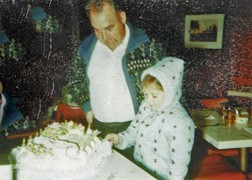 Johnny’s opened in 1946 at the conclusion of World War II. My uncle was Johnny Vieth, also known as the “Buttermilk King,” famous for his pancakes. But he was much more than that – he was a one-of-a-kind type of guy with a keen sense of humor. He was a true gentleman in every sense, generous, smart, charming and a prankster. Everyone loved him – customers, staff and the village folk of Sister Bay.

Johnny’s is where everyone went to catch up on the local chatter or just to go to be cheered up. It was a confortable little restaurant that made you feel at home and part of the family. It was the definition of “local flavor.” “Where old friends meet” was his motto.

My first memories of Johnny’s are as a child, walking to the restaurant with my grandmother to get a treat. You could smell buttermilk pancakes and sausages lingering in the air. My mother, Joan Vieth Champeau, was a manager and waitress there for 30 years. “The Cottage” holds many fond memories for all of us; my mom said she practically raised her children there in the kitchen at Johnny’s. My entire family worked there one time or another – dad cooking; my sisters Roberta and Nanette started waitressing when they were only 12 years old; my brother Marc bussed tables and did dishes.

Many local kids got their start at Johnny’s. They have gone on to be leaders in our community here and away. Many of them went on to be successful business men and women, real estate brokers, teachers, artists, lawyers, engineers, television producers, professional singers…the list goes on. When Johnny gave that young kid his or her first chance at a job, he taught them about responsibility and respect. 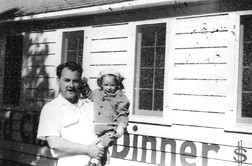 Johnny’s holds so many memories for so many locals and visitors alike. It is a bygone era, when you would see Johnny and Joe Hendrickson, the Texaco man, playing cribbage every morning at 6 am. It was a special time when Johnny would give the key to the front door to the local fishermen so they could make their own breakfast at 4 am. It was where Al Johnson got his start, then went on to write his own success story. It is where new employees were sent all over town looking for the key to the French fryer or gathering stones for “stone soup.” Johnny’s was the place school kids would go for advice when they were in trouble with their parents. It was where fundraisers took place for Sister Bay Little League, and where birthday parties, wedding showers and family reunions were common.

So on May 5, when I drove behind the old restaurant, I found I wasn’t the only one saying goodbye. As I got out of the car, there were my neighbors, family, friends, past employees and the previous owners of the Sister Bay Café, Dave and Sue Daubner. Dave and Sue took such great care of the Cottage for many years. Johnny himself was so pleased with all the improvements, beautification and hard work they put into it.

I wasn’t the only one with a tear in my eye while taking some photos of the rubble. There were others. As I was looking for some small memento behind the caution tape, I could smell the old Johnny’s. Just like it smelled when I was a child. It almost felt like Johnny was there, even though he has been gone four years now. I felt him saying to me, “It was a good life, but that’s it, kiddo. 86!” (That’s restaurant talk for “It’s over.”)

So a little bit of Sister Bay died today. Thanks for the memories, Johnny’s. We will always remember them.