Last week in Egg Harbor a somewhat historic tavern and dance hall was torn down at the behest of village officials. A tavern with an unusual mansard roof built by the hands of Tom Carmody, a descendent of one of the village’s first settlers, in 1934.

Older residents remember it as a dance hall with live entertainment. Lena and Don Geismann purchased it in 1943, and after Don died in 1949, it was known only as Lena’s Sip & Chat because Lena preferred to do nothing more. Something she did for 52 more years.

After Lena died a succession of owners and renters tried without success to resurrect it as a community gathering place. Fortunately, none had the money to dramatically change its appearance from what it looked like in 1934. Until its demise it represented a rare glimpse into what social life was like in the early days of electricity in Egg Harbor. 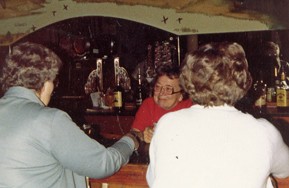 Lena Schultz in her familiar perch at Lena’s Sip & Chat.

We live in a world were attitudes and public policy are often shaped by vague recollections of past experiences. Those who have lived in cities may have recollections of corner bars that were often dangerous and unsavory; the removal of one of these places may be no big deal. Even within tourism destinations some eating and drinking establishments earn reputations that satisfy the craving for excess for some visitors and repulse others. Hence, bars and restaurants don’t often get billed as historic sites.

The desire to go “where somebody knows your name,” however, is universal. The romantic paintings of the espresso shops of Italy and the outdoor cafes of Paris inspire a vision of community where folks gather and chat with a proprietor or neighbor. Throughout much of our history taverns were the only places that offered anything resembling the socialization opportunity offered by the coffee shops of Europe. Today we now have Starbucks, which tries to create a superficial social venue, and many independent coffee shops that offer a real community experience.

Unfortunately, today’s proprietors of American taverns and coffee shops alike often have little understanding of the socialization purpose of the community institutions they own. Owners are rarely seen on the premises and the “host” is more likely to be one who is not experienced enough to do anything else. The “hosts” of yesteryear on Wisconsin’s Door Peninsula – Al Johnson, George Schmidts, Murphy Moore, Phil Gordon, the Lautenbachs at Caseys, and the Bertschingers at the Alpine – were there to greet you at the door every night and certainly “knew your name.”

It isn’t that Lena was one of those exceptional personalities that blessed our community, although she certainly slept, ate, and drank Lena’s every day during her tenure and “knew your name.” Lena’s wasn’t always the gathering place of choice of choice for the community – the popularity of gathering places improved or declined as personalities moved around or moved on.

What Lena’s represents is that it was the last of the local gathering institutions in our community that retained its reputation as a place where folks just went to go to “sip and chat.” Contrary to local assertions that its subsequent occupants were unskilled operators, patronage improved if an operator had a sense of the building’s purpose as a community gathering place.

If there is one thing that coincides with the decline of our tourism destinations over the past 20 years, it is the gradual shift towards investor-owned businesses where the owner is no longer the live, visual expression of the community one is visiting. Similarly, employees with personalities and community knowledge are no longer seen as essential and have been replaced by the omnipresent and economical foreign worker. One exception to this in Egg Harbor is the Main Street Market, where multiple owner personalities co-mingle with well known locals in every corner of the store. This business thrives in a community of a few hundred folks and competes with distant super stores beyond anyone’s reasonable expectation.

National commentators struggle to find ways to overcome the economic malaise that is increasingly evident throughout the country. They categorize the serving professions as unskilled and unworthy of attention as a solution to economic prosperity. Being dedicated to the craft of serving the public well and creating a community where everyone knows each other’s name is a profession of the highest order and one that requires an intense amount of skill and perseverance. By comparison, keeping the books when QuickBooks now does it for you requires only a narrowly defined skill and perhaps less desire to interact with the public.

It took a long time for big box stores to get near this rural Wisconsin community, so folks still remember what it was like when money changed hands locally and most got their fair share as a result. Few got to the point of wealthy excess but most had enough to educate their children, take a vacation, or purchase the car they dreamed of. The era of giant investor-owned retail businesses is unprecedented in history and may prove to be short lived. Likewise, the loose financing that allowed folks to become detached investors is rapidly fading from the scene and proprietors may again have to rely on their personalities and their community purpose to succeed in business.

Lena’s may not be the best example of an almost forgotten lifestyle that is based on a community where people depend upon each other, but until a few days ago it was certainly the only one of its kind left in Egg Harbor. Village officials proclaim proudly that it will be replaced with a place of community where “everyone knows your name.” In other words, they are replacing it with what it was so great at being for 80 years.

What the proponents need to know is that the track record for creating what the Door peninsula is all about in a new structure is not all that great.

The structure that will likely replace Lena’s will likely become Egg Harbor’s other white elephant – a community center manned by anonymous employees where no one knows your name. Its proponents will seek other venues that for them represent what they came to the peninsula for in the first place, a place where you can sip and chat, and where everyone knows your name.