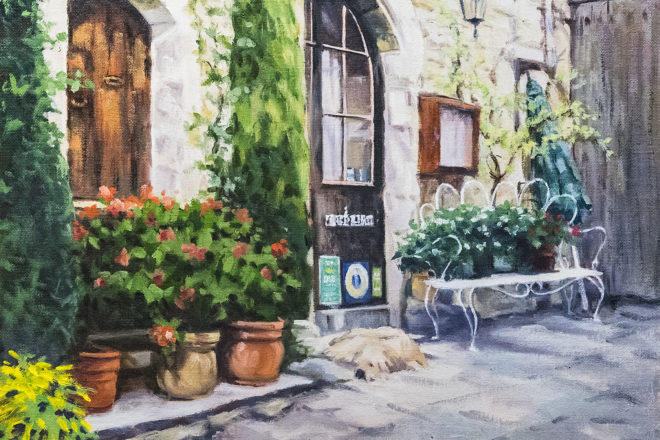 Having a thriving arts scene is something many Door County residents and visitors can take for granted today. But having something that can be taken for granted is thanks to many artists who laid a foundation for future artists to grow. Rosemary Utzinger was one of these artists. Utzinger, who died Jan. 28 in Largo, Florida, worked from her Fish Creek studio painting landscapes, still lifes and portraits in oils.

For 28 years, Rosemary and her husband, Verle, called Door County home, and she worked throughout those years promoting arts in the county. In addition to being an instructor at the Peninsula School of Art, Utzinger was a founding member of the Door County Art League. Organized in 1986, the league began with 14 artists who wanted to develop community interest in the creative arts. The group was inclusive to artists of all skill levels and who worked in any medium.

The league offered artists multiple opportunities to exhibit work in the league’s gallery and during the annual Door County Art League Showcase. At the showcase, artists were recognized with various awards, and a Door County Master Artist was named. In 2003, Utzinger was awarded a Door County Masters medal for her accomplishments as an oil painter.

The Door County Art League disbanded in 2016, but it left behind a strong arts community. In the league’s 30-year history, membership grew from 14 to 300 members.

A celebration of Utzinger’s life is being planned for July 8, 2019, in Fish Creek, with interment of her ashes at Blossomberg Cemetery. Details will be announced at a later date.