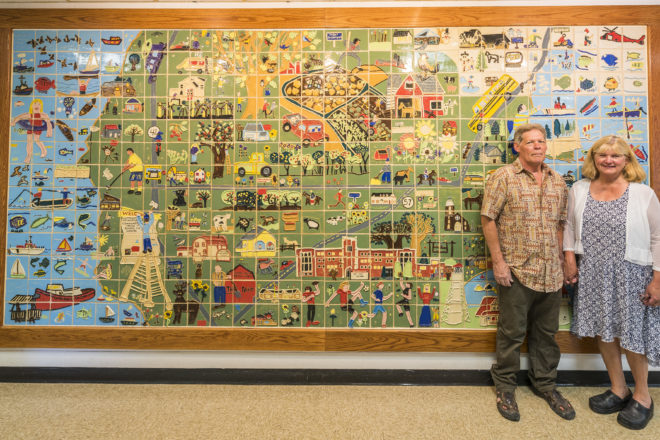 The “Shore to Shore” mural was created by the students of Sevastopol Schools with guidance from David and Jeanne Aurelius of Clay Bay Pottery. The project was a PAA grant recipient in 2010. Photo by Len Villano.

As Door County’s arts and cultural organizations open shop for the 2018 season, they will do so in the shadow of the first full year since the 80-year-old Peninsula Arts Association (PAA) folded.

From 1937 until 2017, the nonprofit PAA provided financial support to launch the careers of many artists on the peninsula and gave legs to the organizations that still dominate our cultural landscape. Among them are the Peninsula School of Art, The Hardy Gallery and the Peninsula Music Festival, for which PAA served as an umbrella organization.

Its mission to bring artists together “and give other residents of the county a chance to share their inspiration” came out in many forms and media over the decades:  filmmaking, photography, clay tile murals, play readings, playwriting and an arts map, among others.

“There were a lot of projects that gave us a lot of heart,” said Alicia Mulliken, longtime board member and former president of PAA. “We were so proud of it.”

PAA accomplished this first through supporting individual artists as its own granting organization, and then through a partnership with the Wisconsin Arts Board starting in 1994.

From then until last year, PAA was the local player of the Arts Board’s Regranting Program, designed to provide funds to local art agencies and community foundations to regrant for arts-related projects in their communities. It was a matching grant program, meaning that when PAA applied for and received a $25,000 grant (which it did annually), they were responsible for raising a 100 percent match.

Fundraising proved a success, and in the early years PAA ran four grant cycles per year, divvying up its money evenly over those four sessions. In the nearly 20-year relationship between PAA and the arts board, which ended in 2011, PAA regranted more than $600,000 to local artists and cultural organizations. But as other organizations got their footing and found their audiences, the fight for dollars became tougher.

“We found that fundraising was becoming increasingly harder because we were all going for the same money and we found also that people who were willing to give a chunk would rather not give it to the PAA to become an anonymous donor in a pot of money but they’d rather give it directly to, let’s just say the Peninsula Music Festival and get credit, personal credit,” Mulliken said. “We found our way getting harder and harder, and the Arts Board was wonderful and worked with us but we ended up applying for less and less money.”

Last year, with the writing on the wall, members of PAA met one final time to grant out their remaining pot of money and fold the 80-year-old organization.

“We thought, let’s have the pleasure and joy of dispersing the rest of the money according to our bylaws,” Mulliken said.

Jerod Santek, executive director of Write On, Door County, considered the donation an honor – a welcoming torch he hopes indicates his organization’s coming longevity on the peninsula.

“A lot of my board members who have lived here for all their lives or for many decades talked to me about how PAA got so many organizations off the ground and running,” Santek said. “We hope this final gift is an off-and-running for Write On.”

For more organizations and people making a difference in Door County, pick up the 2018 Door County Living Philanthropy Issue, on newsstands now.