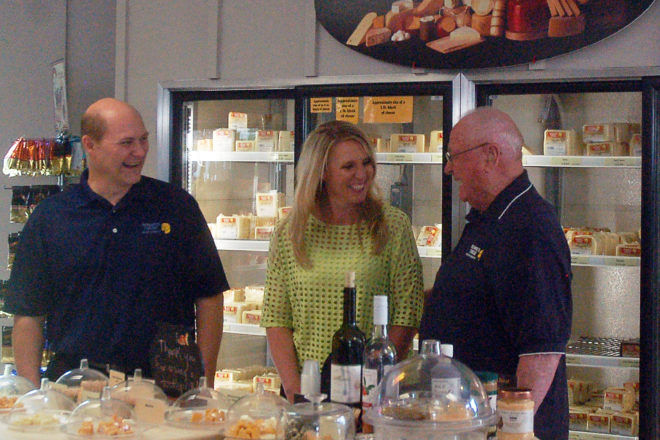 Chris and Ann Renard share a laugh with Howard Renard, Chris’ grandfather and founder in 1961 of Renard’s Cheese.

We can only wonder if Gov. Scott Walker and other state officials who traveled to six cheesemakers around the state to celebrate Wisconsin Cheese Day on June 26 heard a better story than the one the Renard family shared.

This third-generation family of cheesemakers told top executives from the Wisconsin Economic Development Corp. and the Department of Agriculture, Trade and Consumer Protection that they have experienced 600 percent growth at the retail store on Hwy. 57. Yes, that is correct. Six-hundred percent growth.

That, of course, translates to more employment. The number of retail employees went from four to 45. The Rosewood Dairy cheese factory on County S went from six employees to 18, and the factory went from making 1.74 million pounds of cheese annually to 3.4 million pounds. 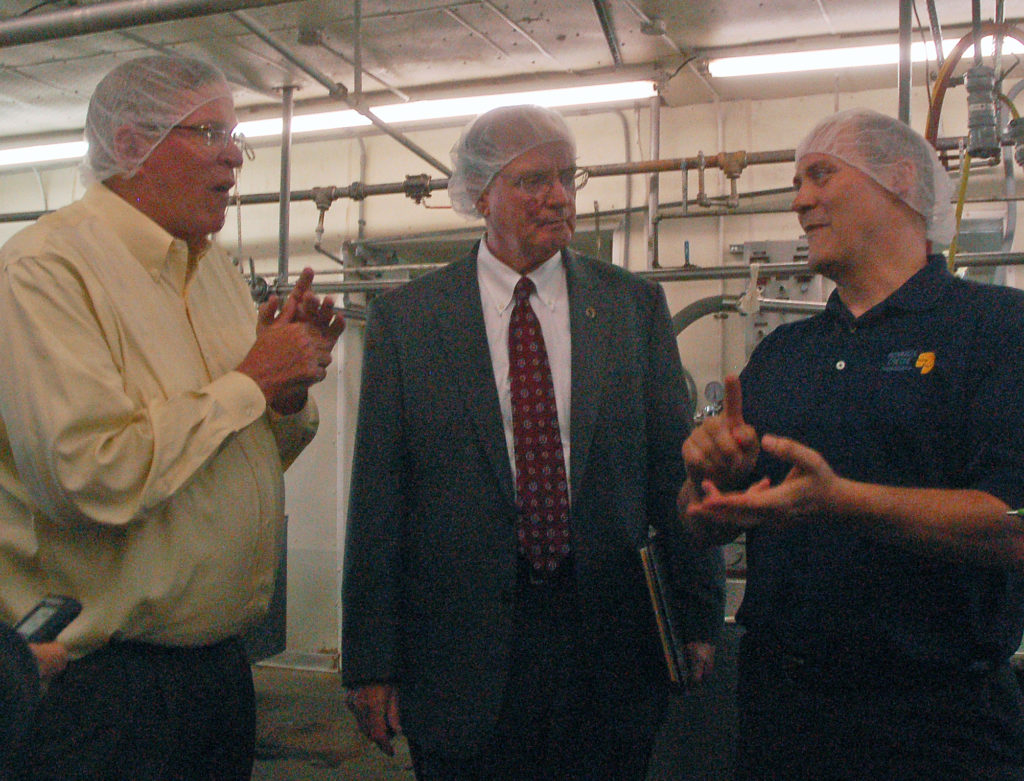 On top of all that, the Renards intend to expand the cheese plant in 2018.

The state officials, representatives from the dairy and cheese industry, media and customers gathered at the small Renard’s retail shop next to the cheese plant on County S to celebrate the cheesemaking history of the Renard family, three of whom were in attendance – current owners and married couple with four daughters, Chris and Ann Renard, and the cheesemaking patriarch, Chris’ grandfather Howard Renard, who started the business on County S in 1961. Chris’s parents were the second generation involved in the business but they were unable to attend the event.

Master Cheesemaker Chris Renard had a proud smile on his face that would not quit as he talked about the business, and he immediately won everyone over by proving what a family business this is by taking to task the old saying, “Behind every good man is a good woman.”

“I think that’s wrong,” Chris said about his wife, Ann, “because she’s been by my side the whole way. She’s never been behind me.”

You could almost feel the collective “Awwwwwwwww!”

Chris then gave a quick history of the business, beginning with his grandfather Howard, who began making cheese at the age of 14 and worked for other cheesemakers until he decided to go into business for himself and bought the Rosewood Dairy in 1961.

“All the kids in the family helped out,” he said.

In 1966 Howard added a cheese factory on Hwy. 57, where the current retail location is. Cheese was made there until 1975, when Chris’s dad built the retail store. Chris and Ann took over the Hwy. 57 retail store in 2010 and in 2012 they built the new retail store there. In 2014 they also took over the County S plant and retail operation.

“The growth has really started since then,” he said.

“The State of Wisconsin is the only state that has a Master cheesemaker program,” he said. “Some states don’t even require licensed cheesemakers to make cheese.”

Ann Renard then talked about being new to the cheese industry in 2010, but she brought sales, marketing and financial skills to the table.

She also talked about potential new markets opening in other countries through Wisconsin Economic Development Corporation (WEDC) trade missions. They have been to both China and Mexico to talk cheese exports.

“We’re excited for that opportunity,” she said. “It’s very important as a company to diversify. We are very fortunate to be in the state of Wisconsin where we have so much support.”

Mark Hogan, secretary and CEO of the WEDC presented the Renards with a certificate recognizing their success.

“It’s great to hear about your plans,” he said. “The success that you have is important to Door County, the Door Peninsula and the rest of Wisconsin.”