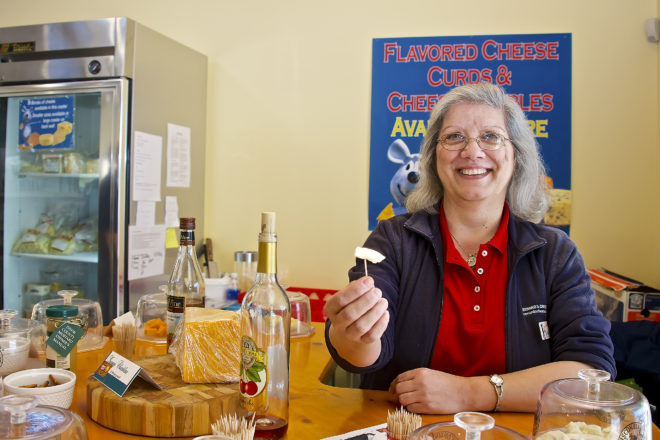 A lot has changed in the world since 1961, but at least one good thing has not. A bite of Renard’s cheddar tastes exactly the same today as it did more than a half-century ago when Howard Renard began producing it in the little Rosewood Factory on County Trunk S near Algoma.

Renard’s has seen tremendous growth through the years, but the hands-on, no-automation way they make their cheese has not changed at all. Someone looking at the operation today might say, “Wouldn’t Howard be amazed if he could see what has happened with the little factory he started!” What’s amazing is that, at almost 88, Howard Renard does see it all every day, because he’s still very much a part of it.

This is not a history lesson, but to appreciate the rest of the story, it’s important to know a bit about how it began.

Now the great-grandpa of the Renard family, Howard began learning how to make cheese at 14 at Fontaine’s Cheese Factory in Namur. Gary, one of Howard and Angela Renard’s seven children, expanded the business by purchasing the Cloverleaf Cheese Factory on County DK, south of Sturgeon Bay, two weeks before he graduated from high school in 1966. By 1975, all of Renard’s cheese was being produced at Rosewood, and there was a retail store at both locations. In 1980, with a cold-storage facility that could hold five semi-truck loads of cheese, the family began to market their own products.

Gary says that his son, Chris, was schooled in cheesemaking from the time he could tie his shoes. (An empty vat was his playpen, and he started helping out by washing milk cans when he was four.) After graduating from UW-Green Bay with a degree in business and marketing, Chris spent a few years as a buyer for SuperValu, but the lure of cheesemaking drew him home, and in 1998 Gary retired and sold his shares in the Rosewood factory to his son.

Chris’ wife, Ann, became actively involved in the family business in 2010, when the couple purchased the Cloverleaf retail store on DK. Two years later, they built a new retail store just south of the old one, providing more space for marketing their cheese, as well as expanding the sale of other Door County products. (Without seeing this lovely space that includes a small café with indoor and outdoor seating, it’s difficult to envision how little it resembles the old Cloverleaf store.)

In 2014, Chris and Ann purchased all the shares of the Rosewood Cheese Factory and the retail store next door. The little boy who started scrubbing milk cans at four and his wife were now the sole owners of Renard’s Cheese. 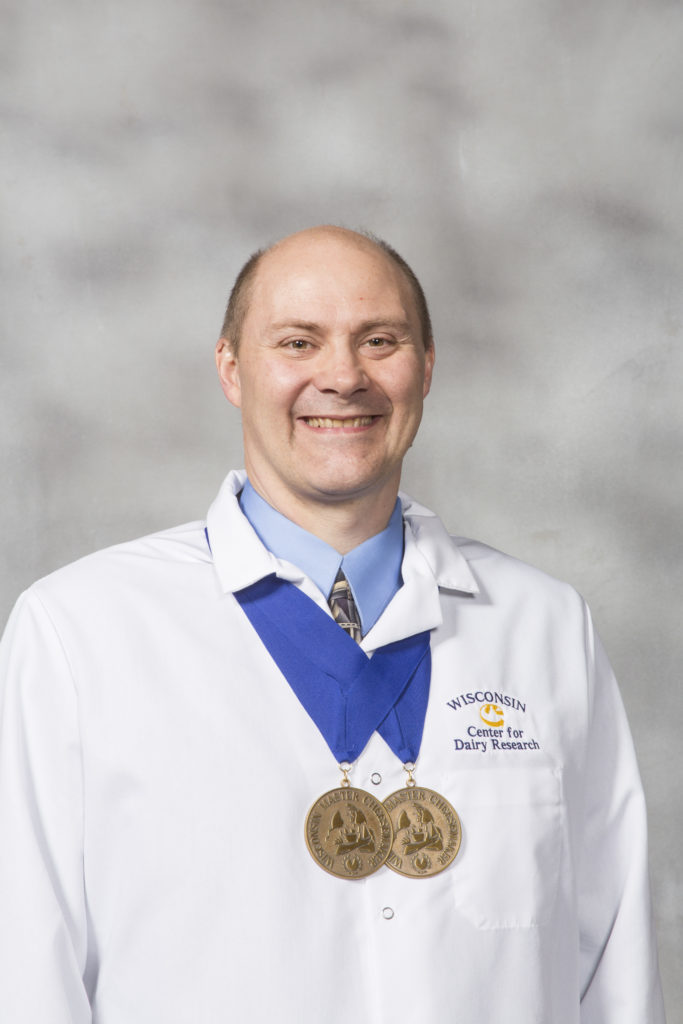 Also in 2014, Chris completed the requirements to be designated a Master Cheesemaker. Wisconsin is the only state that offers this certification that requires a minimum of 10 years’ licensed experience for admission to the program, two years of demanding coursework and a 40-hour open-book final exam. He is the only certified Master Cheesemaker in Door County and one of just 62 in the state.

When Chris and Ann took over in 2010, they had four full-time employees and two part-time in the old Cloverleaf and eight in the Rosewood factory. In the new store, they now have 45 full-time, year-round employees and 65 during the busy season. The factory staff has grown to 18.

Just as in the old days, they have tremendous loyalty to the business. Several of the employees at the new store are Southern Door students who work weekends during the school year and full time during the summers through high school and college. “All our employees are really good people,” Ann says. “Southern Door kids are workers, and everyone here is a huge value to our company.”

Renard’s produces about 2.5 million pounds of cheese a year – cheddar, Monterey jack, brick, mozzarella, farmer’s, colby, muenster, marble, curds, string, many kinds of cheese spreads and 25 to 30 flavors of infused specialty cheeses. (That’s nearly three times what production was six years ago, and, yes, curds are still the bestseller, followed by Cheddar aged 1, 2, 3, 4, 5, 7, 9 and 15 years.) Renard’s cheese is sold in retail stores all the way to Chicago and Madison and wholesale all over the U.S. Chris and Ann are in talks with some customers about exporting.

It’s no surprise that the fame of Renard’s cheese is widespread. Howard’s first major customer all those years ago was in Pennsylvania.

There were once 1,300 dairy farms in Door County, selling their milk to 49 “crossroads” cheese factories. According to George Evenson, a retired dairyman, there were 20,000 dairy cows here in 1951. By the beginning of the 21st Century, there were 9,000 – and none of them north of Fish Creek. Today, Renard’s is the only year-round cheese factory in Door County. They still get their milk from family farms in Door and Kewaunee counties. 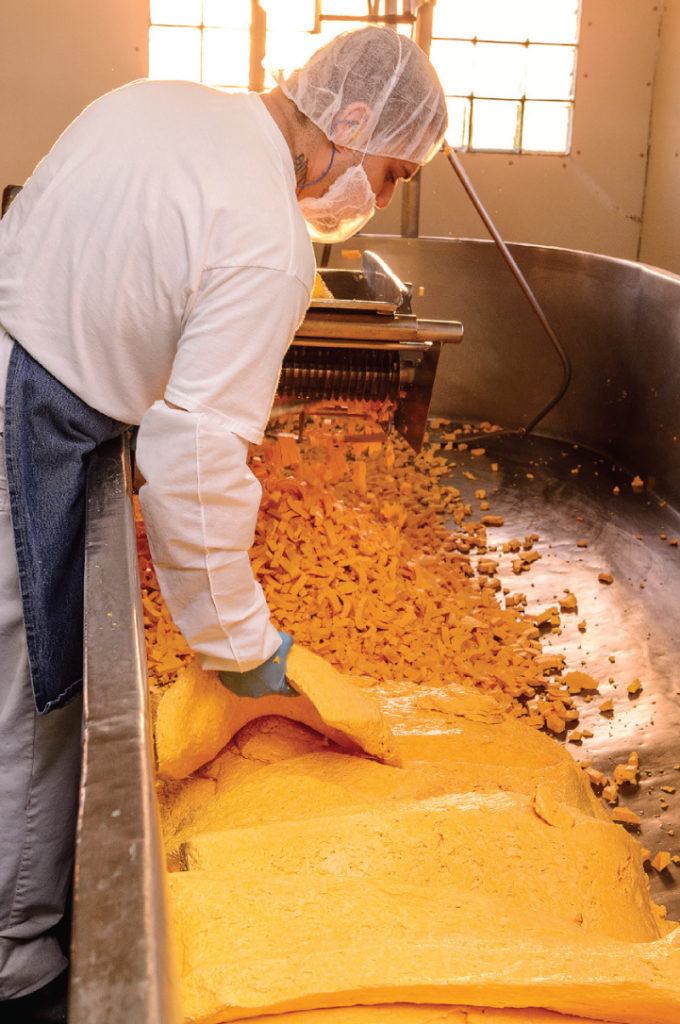 Great-grandpa Howard still goes to the factory near Algoma every day. He brings the mail, walks through the plant with a big smile and personal greeting for every employee, mows the grass and serves as adviser to grandson, Chris, the third generation of Renard cheesemakers.

Chris and Ann have four daughters: Sam, 18; Gabby, 13; Taylor, 11; and Carrie, 8. Will they be the fourth generation? Their parents say they hope the girls will feel free to go out and do their own thing and come back of their own free will, if that’s what they really want.

Sam is going to St. Norbert’s this fall to become a nurse practitioner. Like her sisters, she has been familiar with the factory and store since a young age. The three older girls have all helped in the store. Gabby was cutting string cheese when she was seven, and Carrie was just two when she won an award from the Midwest Broadcasters Association for the best commercial in the Midwest. (She ate a cheese curd and smiled broadly.)

And the future? Within two years, Chris and Ann, plan to build a new factory behind Rosewood with 50 percent greater production capacity, up to 3.75 million pounds annually. Research says that the average American eats about two pounds of cheese a month. By 2018, Renard’s will be able to provide 163,043 folks with their annual supply. That’s a lot of cheese to smile about!